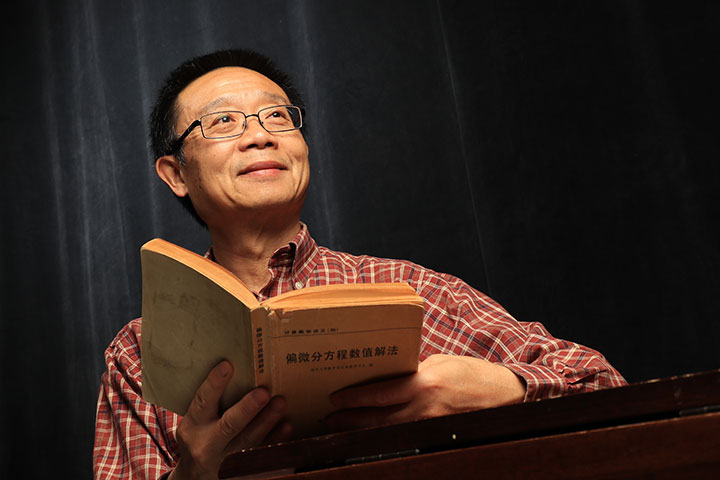 Tim Sheng, Ph.D., is a professor of mathematics in Baylor's College of Arts & Sciences.

WACO, Texas (July 26, 2019) – Critics often blame academia for turning inquisitive, broad-minded students into unidimensional scholars and researchers. But more than a few academics refuse to follow a laser-thin career path. Indeed, nurturing a broad perspective in the academy can be challenging, but perhaps less so if your chosen discipline is one essential to a great many others—as is mathematics.

Baylor mathematics professor and CASPER researcher Qin “Tim” Sheng, Ph.D., was born into a China in the throes of Cultural Revolution. It shuttered all universities. While Sheng’s parents were forced away, his grandmother and an elderly aunt cared for him and his two younger brothers. For about a decade they knew nothing of their parents’ fates.

Left to themselves and with almost no schooling, Sheng and his brothers might have gotten into trouble were it not for their insatiable curiosity. The brothers began to scavenge books that were being purged.

“People basically threw away their books that time. We just picked up books anywhere, from trash cans, anywhere, and read them,” he said. “Can you imagine three little boys, ten years old, seven years old, eight years old together trying to learn calculus from books we never saw before?”

Sheng’s self-study revealed an exceptional aptitude for sciences. When some of the universities reopened at the end of the Cultural Revolution, he took entrance exams and scored very high.

Sheng studied mathematics at Nanjing University, one of the top institutions in China. Soon after earning his master’s degree in 1985, Sheng was accepted to Cambridge University. But without enough money even to travel to the United Kingdom, much less to attend such a prestigious university, acceptance was at first a hollow honor. Fortunately, he had attracted the attention of Schlumberger, a Texas oil and gas technology company with a penchant for investing in promising young students. He was selected from hundreds of candidates to receive a foundation scholarship from the energy giant.

“[The scholarship] paid for everything,” Sheng said, “But I still did not have any pocket money. So just as I was leaving for the airport my Nanjing advisor approached to me, ’I have one hundred U.S. dollars that I have had in my suitcase for many, many years. I have not had a chance to use it, so you take that $100 with you for your transportation, to buy a drink or food on the way there.’”

At Cambridge, and later during a post-doctoral appointment at University College London, Sheng found himself readily accepted into the company of some of the world’s brightest minds. His Ph.D. advisor, Arieh Iserles, was a fellow of the King’s College, which nurtured many great scholars such as John Keynes and Alan Turing, and the office next door was occupied by a brilliant physicist named Stephen Hawking. “We all had tea together every day.”

At Cambridge, Sheng worked in fluid dynamics and physics, and in theoretical/applied mathematics. Sheng enjoyed the diversity of work his position at Cambridge offered, but soon began to receive attractive and lucrative job offers from outside academia. A large, an international bank in Zurich, UBS, wanted Sheng to apply his mathematical curiosities to options trading. He turned down the offer. Later, Japanese electronics giant NEC tried to recruit him to work on supercomputers. But by this time, he had decided to stay in academia rather than work in the corporate world, and he refused that job as well. Then in 1990, an offer came from one of the three highest-ranked universities in Asia — the National University of Singapore — and he finally decided to leave Cambridge.

During his five years in Singapore, Sheng did research in classical mathematics and published several well-received papers. He also met and later married his wife, Helen, and became the father of two sons. Sheng shortly found pure mathematics too abstract and began to look for opportunities abroad. “Singapore was very good, much interesting research. But it is too far away from the center of research,” said Sheng. “So where is the center of research? It is the U.S.A.!”

In 1996, Sheng accepted a position with the University of Louisiana, Lafayette. There he worked on models of combustion, an area of study he’d begun with Professor Frank Smith, fellow of Royal Society, at University College London. Though the work was rewarding, Sheng again began to feel that the real frontiers of his field lay ahead of his work at Louisiana. So, after another five-year stretch, he sought more advanced work. He found it at the Air Force Research Laboratory in Dayton, Ohio, where he discovered cutting-edge research in computational e-optics. “At Dayton I was pretty successful in my research,” he says. “Lots of colleagues, very friendly and highly intelligent.”

“It was a completely new program and that appealed to me. So I took a half-year leave from Dayton and came here [Baylor]. We discussed with everyone how to go forward, and how I could contribute to the program,” he recalled. “Work was very interesting, good environment, wonderful colleagues, and the university was very supportive. That confirmed to me that I should make the move; otherwise I could have easily stayed in Dayton. But I wanted to help build the program.”

Joining Baylor in 2005, Sheng quickly began helping to forge the university’s nascent Ph.D. program into a cohesive, productive enterprise. “There are certainly lots of things beyond just the research: design courses, write curriculum, plan research requirements and use my experience at other universities—including Cambridge—to help the program become strong.”

Most important to Sheng was that at Baylor he finally found free range to pursue a wider spectrum of work, take on graduate students, offer undergraduate projects, discuss with postdoctoral associates and explore at the forefront of his fields. Now in his thirteenth year at Baylor, he has at last ended his pattern of working in five-year cycles at one place before moving on.

With over a hundred published papers, Sheng is finding his work accepted and applied in an eclectic mix of disciplines. Since coming to Baylor, he has published 65 papers in 31 separate peer-refereed journals: 42 in mathematics journals; 14 in physics; three in computer science; two each in astrophysics, biochemistry, and engineering. He was invited to deliver keynote or plenary lectures in 9 international conferences held in 7 different countries recently. His research is sponsored by agencies including the Air Force Research Laboratory, American Mathematical Society and industry. He is invited by the National Science Foundation to serve as a panelist for five consecutive years.

His physics and astrophysics papers stem from his work at Baylor’s Center for Astrophysics, Space Physics, and Engineering Research (CASPER), which he joined in 2006, shortly after coming to Baylor.

“I am involved in EUCoS, CASPER’s Early Universe and Cosmology group with [Drs.] Jerry Cleaver, Anzhong Wang, and Klaus Kirsten. My part is basically to provide mathematical support, theoretical support, and computation support to the whole team’s work, which is looking at quantum cosmology. We try to explain things as small as the solar system, all the way up to the entire universe. We use a theory to establish a model of this kind of phenomenon … to get a better understanding of the whole universe. Through that kind of theory, we can reveal certain new discoveries, like new energy, and this relates to research into gravitational waves that were just recently discovered.”

As EUCoS director, Cleaver is appreciative of Sheng for his ability to support the group’s work in a variety of ways. “Tim provides a unique blend of computational mathematics and numerical simulations that contributes much to our interdisciplinary projects,” Cleaver said. “His computational insights are invaluable.”

And Sheng’s horizon extends beyond the sciences as well. While at Cambridge he became fascinated with philosophy. “Since my time at Cambridge I have been quite a student of philosophy and a member of the Philosophical Society there. At Cambridge, mathematics is not a part of natural science; it’s considered philosophy. So that’s why I was involved in a lot of activities related to philosophy: language, culture, even linguistics and psychology.”

Sheng co-edits the International Journal of Computer Mathematics published by Taylor and Francis Group, London, but he remains most dedicated to teaching and his students.

“I do my best all the way to encourage and to get together with students. I always tell my graduate students to be the best teacher first, then be the researcher.”

ABOUT THE CENTER FOR ASTROPHYSICS, SPACE PHYSICS AND ENGINEERING RESEARCH (CASPER)

The Center for Astrophysics, Space Physics and Engineering Research (CASPER) is a stand-alone research center located at Baylor University. CASPER teams conduct research in a number of theoretical and experimental areas and offer both basic research as well as engineering and design opportunities for graduate, undergraduate, technical support and high school students as well as grade school, middle school and high school teachers. For more information, visit www.baylor.edu/CASPER.

The College of Arts & Sciences is Baylor University's oldest and largest academic division, consisting of 25 academic departments and seven academic centers and institutes. The more than 5,000 courses taught in the College span topics from art and theatre to religion, philosophy, sociology and the natural sciences. Faculty conduct research around the world, and research on the undergraduate and graduate level is prevalent throughout all disciplines. Visit www.baylor.edu/artsandsciences.

The Office of the Vice Provost for Research (OVPR) assists faculty members from all academic units in identifying, obtaining and managing the funding needed to support their research and scholarship. Internal 'seed' funding, matching grant proposal funding, searchable online funding databases, grant writing seminars, proposal support and travel awards to national funding agencies are only a portion of what is provided by the various units comprising the OVPR. Additionally, the Vice Provost for Research oversees the ethical conduct of research and assists researchers in maintaining compliance with applicable policies, laws and regulations as well as providing support in establishing interdisciplinary / international collaborations and industry partnerships.

The OVPR acts as Baylor's representative in pursuing partnerships and collaborative agreements with entities outside the university. The office negotiates sponsored research agreements with industry on behalf of faculty and pursues research, technology transfer and the commercialization of technology. The OVPR welcomes the opportunity to discuss collaborative research and scholarship pursuits that can advance the academic mission of Baylor University to achieve R1/T1 status.