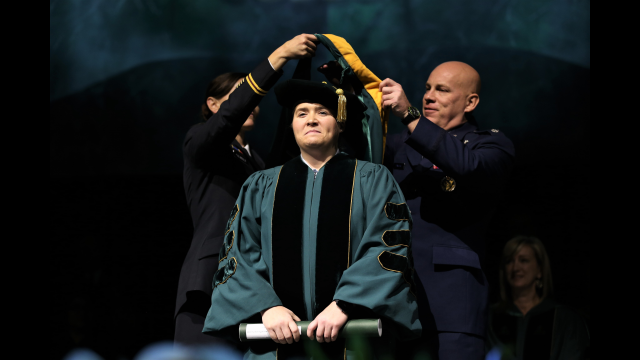 The latest rankings are published online at www.usnews.com and in the U.S. News’ “Best Graduate Schools 2018” guidebook.

The rankings in these six areas are based on two types of data: expert opinions about program excellence and statistical indicators that measure the quality of a school’s faculty, research and students. The data come from statistical surveys sent to administrators at more than 1,970 graduate programs and from reputation surveys sent to more than 16,500 academics and professionals in the disciplines. The surveys were conducted during the fall of 2016 and in early 2017. In each field, we also present rankings of programs in various specialty areas based on reputation data alone.

Baylor Law School moved up four places to No. 51 in the magazine’s “Top Schools” listing for 2018. In the law specialties rankings, Baylor’s trial advocacy program also moved up to No. 3 in the nation.

The rankings of 197 law schools fully accredited by the American Bar Association were based on a weighted average of 12 measures of quality, including assessments by peers and by lawyers and judges, student selectivity, placement success and faculty resources. Specialty rankings were based solely on nominations by legal educators at peer institutions.

Baylor’s Hankamer School of Business was ranked with three other universities at No. 65 among the top-rated master’s programs in business.

To determine the rankings, U.S. News surveyed all 471 MBA programs in business accredited by the Association to Advance Collegiate Schools of Business International, with 377 responding. The rankings were calculated on a weighted average of nine measures of quality, including peer and recruiter assessments, placement success and student selectivity.

Among specialty rankings, Baylor’s online MBA program, which began in May 2014, was ranked No. 72, based on factors such as student engagement, admissions selectivity, reputation for excellence among peer institutions, faculty credentials and training and student services and technology.

In addition, the MBA in health care administration, a specialization in Baylor’s MBA program in the Hankamer School of Business, was last ranked in 2015 by U.S. News at No. 17 in the nation.

The master of science degree in nursing (MSN) program at Baylor’s Louise Herrington School of Nursing (LHSON) in Dallas moved up two places to No. 56 in the 2018 U.S. News graduate rankings, while the doctor of nursing practice (DNP) program was ranked No. 47.

In addition, LHSON’s nursing-midwifery program was ranked No. 10 nationally under the health disciplines category, which was last ranked in 2016.

“We are honored to be ranked in U.S. News & World Report and listed among other distinguished graduate programs,” said Shelley F. Conroy, Ed.D., M.S., R.N., C.N.E., dean of the LHSON. “Our programs are designed to prepare graduates to lead and transform today’s complex healthcare environments. We are very proud of our DNP Program in three advanced practice fields: Nurse Midwifery, Family Nurse Practitioner and Neonatal Nurse Practitioner. We see a great potential for advanced practice nurses who are uniquely prepared in accordance with the Baylor mission and vision for the future to serve as key leaders in population health locally and around the world.”

Among online programs, Baylor’s online master’s degree program in nursing leadership and innovation, now in its second year, made the highest jump of all rankings from No. 79 last year to No. 39 in the U.S. News online program rankings. The rankings were based on factors such as faculty credentials and training, student engagement, admissions selectivity, peer reputation and student services and technology.

“Through this competitively robust program our students will transform today’s complex healthcare environments through the application of cutting-edge and innovative problem-solving methods applied in their own work settings,” Conroy said.

Baylor’s School of Education is rated No. 89 in the 2018 U.S. News graduate program rankings.

For the U.S. News rankings of graduate education programs, 379 schools granting doctoral degrees were surveyed in fall 2016 and early 2017. The rankings were based on a weighted average of 10 measures of quality, including peer and superintendent assessments, student selectivity, faculty resources and research activity.

In the U.S. News graduate rankings of engineering schools that grant doctoral degrees, Baylor’s School of Engineering and Computer Science and its graduate engineering program was ranked No. 123.

To determine the rankings, U.S. News surveyed 214 engineering schools that grant doctoral degrees in fall 2016 and early 2017. Rankings for the 198 schools that provided the data were calculated based on a weighted average of 10 measures of quality, including peer and recruiter assessments, student selectivity, faculty resources and research activity.

U.S. Army-Baylor health programs are operated at the Academy of Health Sciences at Fort Sam Houston in San Antonio. The business school MBA in health care administration program is a part of the Robbins Institute for Health Policy and Leadership, the foundation for health care-related initiatives in Baylor’s Hankamer School of Business.

U.S. News newly ranked the Social Sciences and the Humanities, which were last surveyed in 2013. Ranked Baylor graduate programs in the College of Arts and Sciences include:

U.S. News did not update its graduate rankings on the Sciences, which were last ranked in 2014. Ranked Baylor science graduate programs in the College of Arts and Sciences include: