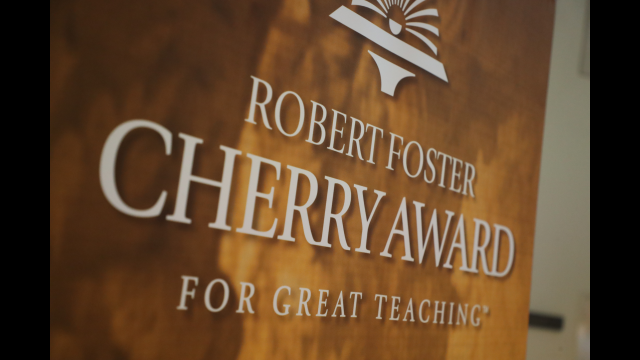 WACO, Texas (Sept. 30, 2021) – Each of the three finalists for Baylor University’s 2022 Robert Foster Cherry Award for Great Teaching will present a public lecture on Baylor’s campus beginning Tuesday, Oct. 5. Each lecture also will be livestreamed on the Cherry Award website.

The Robert Foster Cherry Award for Great Teaching is the only national teaching award – with the single largest monetary reward of $250,000 – presented by a college or university to an individual for exceptional teaching. The winning professor will be announced by Baylor in spring 2022.

As Cherry Award finalists, each professor receives $15,000, as well as $10,000 for his or her home departments to foster the development of teaching skills. Each finalist will present Cherry Award lectures at Baylor during the fall of 2021 and also on their home campuses.

The schedule and lecture descriptions for the Baylor campus are below:

Lecture description: In today’s society, we all need to be fluent with statistics – for making everyday decisions, making sense of visualizations and statistics given in the media, and preparing for many careers that utilize data. Attention to students’ learning of statistics (and now data science) in grades K-12 and college settings has increased dramatically in the past decade and will continue to grow as we emerge from a global pandemic with a constant flow of data. Yet, teachers often feel unprepared to teach statistics or engage students in data investigations. This talk will focus on how Lee has tackled the problem of teachers’ preparedness to teach statistics through use of innovative design solutions in curriculum, software, and online professional learning environments. How do design principles help teachers and curriculum developers build opportunities for learning statistics in educational environments, both in person and online? We will unpack this question through examples of ways to foster discourse and engagement with data to build teachers’ capacity for teaching statistics. Come with your phone or tablet to engage in data moves and discourse.

Jeb Barnes, Ph.D., professor of political science and international relations at University of Southern California, will present “Turning on Those Who Turn to the Courts: Litigation, Polarization, and What to Do About It” at 4:15 p.m. Monday, Oct. 18, at McClinton Auditorium, Room 240 in Baylor’s Foster Campus for Business and Innovation, 1621 S. Third St.

Lecture description: Understanding political polarization is central to contemporary American politics. In this talk, Barnes will discuss the design and results of a recent survey experiment, which he conducted as part of a larger project on the political consequences of American reliance on litigation. The survey shows that turning to the courts engenders negative and polarized attitudes towards litigants, even when they are seen to have legitimate claims. Digging deeper into the results, he’ll explore strategies to reduce this effect. Finally, he will step back and reflect on why teaching research design – often seen as “curricular spinach” – is central to modern liberal arts education.

Lecture description: Remember the film “Animal House?” The scene when Bluto (John Belushi) attempts to rally the American warrior spirit of his fraternity brothers by asking, “Was it over when the Germans bombed Pearl Harbor?” Actually, the outbreak of war in December 1941 fell hard on a country where many citizens had been deeply divided on the course of American foreign policy and others remarkably ill-informed about geopolitical realities. Surveys conducted that month reported that only 14 percent of Americans could name one of President Roosevelt’s “Four Freedoms,” and a mere five percent could articulate a clear ideological reason for the war. Drawing on the research and material from six of his books, Roberts focuses on the role popular culture played in informing Americans of the reasons for the war, the ideological issues involved in the conflict and the world the Roosevelt administration hoped would emerge from the ashes of battle. The address takes the listeners from the studios of Hollywood and the recording rooms of Tin Pan Alley to the center of the comic book industry and the gridirons of the country’s universities. Focusing on such personalities and icons as Billy Wilder and John Wayne, Irving Berlin and Judy Garland, Superman and Captain America, the address shows that never was entertainment so serious and important. It proved a valuable weapon in the American war effort.