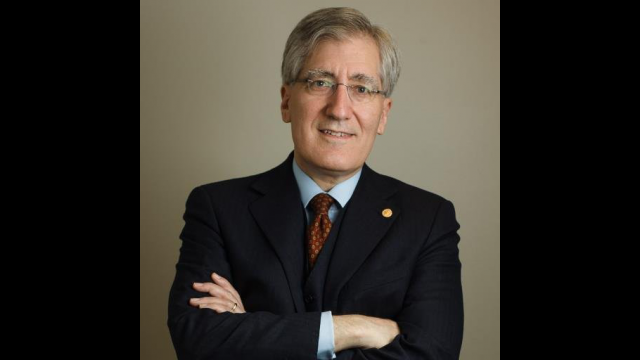 George, who is McCormick Professor of Jurisprudence at Princeton University, will hold a courtesy appointment as a Distinguished Senior Fellow within Baylor’s Institute for Studies of Religion (ISR).

“We are honored that Professor George will be associated with our work in the nation’s capital,” said Thomas Hibbs, Ph.D., director of Baylor in Washington, dean of the Honors College and Distinguished Professor of Ethics and Culture at Baylor.

As part of the Baylor in Washington Program, George will participate in regular events in the city, with the first occurring in late October on “Faith and the Challenges of Secularism: A Jewish-Christian-Muslim Trialogue.” George will be joined by Rabbi Lord Jonathan Sacks, representing the Jewish tradition, and Shaykh Hamza Yusuf, representing the Islamic tradition.

In 2018, George will help organize a week-long Baylor summer program in Washington for graduate students, focused on issues at the intersection of faith, ethics and public policy. He also will continue to make regular visits to Baylor’s main campus.

“Professor George has been to Baylor a number of times in recent years,” Hibbs said, “and each time he has been well received by faculty, students and donors. We are delighted that he will continue to make trips to Waco.”

In addition to his professorship at Princeton, George is director of the James Madison Program in American Ideals and Institutions. He is frequently a visiting professor at Harvard Law School. In addition to his academic service, George has served as chairman of the U.S. Commission on International Religious Freedom. He also has served on the President’s Council on Bioethics, as a presidential appointee to the United States Commission on Civil Rights and as the U.S. member of UNESCO’s World Commission on the Ethics of Science and Technology. He is a former Judicial Fellow at the Supreme Court of the United States, where he received the Justice Tom C. Clark Award.

A graduate of Swarthmore College, George holds M.T.S. and J.D. degrees from Harvard University and the degrees of D.Phil., B.C.L. and D.C.L. from Oxford University. He was elected to Phi Beta Kappa at Swarthmore and received a Frank Knox Fellowship from Harvard for graduate study in law and philosophy at Oxford. He holds 19 honorary degrees, including doctorates of law, letters, ethics, science, divinity, humane letters, civil law, law and moral values, humanities and juridical science.

In a recent interview about his new appointment at Baylor, George said he has “long admired Baylor’s outstanding faculty and its commitment to being a Christian research university. It is both an honor and a pleasure to be part of this endeavor.”

“Robert George is a rare talent – a leading public intellectual, an award-winning teacher and top scholar in ethics, law, politics and philosophy, and we are delighted he will help us extend our work in the nation’s capital and here in Waco and beyond,” said Michael K. McLendon, Ph.D., interim provost at Baylor.

ABOUT BAYLOR IN WASHINGTON

Washington, D.C. has a global reputation as the preeminent hub not only of political activity, but also of commerce, law, journalism, healthcare, higher education and the arts. Baylor University joins the ranks of our nation’s most prestigious institutions with the establishment of an intentional presence in Washington. The University is uniquely positioned to do so via its exceptional leadership, faculty, students, and alumni who are engaged in shaping solutions to some of the most critical challenges facing our nation and our world.