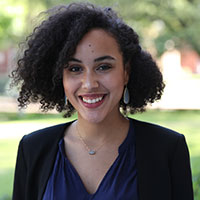 "I grew up in an environment where I didn't have space to consider my dreams. I never even thought that I could pursue a higher education; my thoughts were mostly about survival." Treasure Ramirez reflected on her childhood. Raised in an unstable household near Dallas where substance abuse and physical illnesses were prevalent among both her parents, life seemed like an up-hill battle. When Treasure was 13, she reached out to her aunt and uncle for help. Eventually, they took her under their wing and let her live with them until she attended university.

"My aunt and uncle pushed me to think about life in a way that I hadn't before and helped me realize that I could do more with my life. They supported me emotionally and gave me the tools to succeed and eventually get into Baylor University." Treasure said.

During her Sophomore year at Baylor, Treasure received a recruitment email from the McNair Scholar's program. When she attended the information session, she spoke with the program director at the time to ask about her eligibility for the program. Treasure recalled that day, "I wasn't very confident that I would get in. But when I mentioned this to the director, she asked me "Why not? Why not you? and her question flipped a light switch in my mind. The director showed me what was possible and what kind of things I could be involved in."

Treasure continued, "When I joined the program, I was encouraged to find a mentor. I reached out to my epidemiology professor and asked her to mentor me. She's been a blessing to me in a million different ways. She became not only my academic mentor but also my role model for life. She encouraged me to grow the best parts of my character and find strength in what I have gone through."

Through her mentorship with her professor and time in the McNair program, Treasure learned how to use her personal experiences as fuel for her passion to research health policies and solutions for minority families. In the future, she hopes to improve policies to help protect children who came from similar backgrounds as herself.

"The McNair's Scholars Program has done more than help me build my confidence as a researcher and also taught me how to produce quality publications. The faculty and mentors within the program have also supported me throughout my entire undergraduate process. They taught me about the GRE, how to write a CV, how to network, and anything else I needed to be successful. They also showed me that I could even pursue further education and research, something I never would have considered on my own."

"The McNair program is really intense, fast-paced and requires a lot from you. But at the end of the day, you gain a lot in terms of skills and readiness for your future. Being in the program really helped me gain confidence not just in research but in my own capabilities as a person as well."

After completing her undergraduate degree, Treasure plans to pursue a PhD in Health Services at Baylor University.