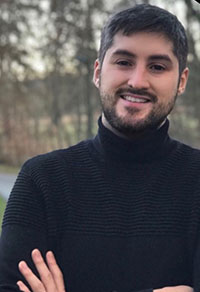 Ignacio earned his bachelor’s degree in Sociology with a minor in Political Theory in 2015 from the Catholic University of Chile. In 2017, he obtained his master’s in Sociology at the same university with a thesis based on an ethnography of a Rastafari deviant religious movements. Throughout these last years, Ignacio has focused his research on religion, social theory, secularization, and Pentecostalism in Latin America. In 2016, Ignacio founded “Evangelical Migrant Service" a faith-based NGO aiming to aid and assist immigrants and refugees coming to Chile.  He also spent his university years as teaching assistant. Before coming to Baylor to obtain his PhD in Sociology, Ignacio lived 4 years in France teaching Spanish and social science in middle and high school. He also earned a master’s in sciences of religion at the École Pratique des Hautes Études in Paris.

As a PhD student, Ignacio hopes to research the state of secularization in Latin-America from a comparative point of view. He expects to understand the contemporary trends of religious change of the sub-continent: the decline of Catholicism, the stagnation of the evangelical growth, and the rise of non-religious people.

Ignacio chose to study at Baylor due to high academic standards and quality of its sociology of religion program. Its location in a cosmopolitan city, class size, and the strong collaboration between and graduate students and faculty member were also relevant for his decision. He is eager to deepen his sociological understanding of religion by researching and publishing along side with professor and colleagues during his stay at Baylor.