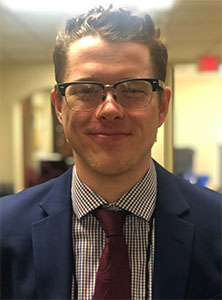 Brandon Brown is a first-year student in Baylor's Sociology Graduate Program. A native of West Texas, he graduated from the University of Mary Hardin-Baylor with a B.A. in Political Science and a minor in Sociology in 2019. While at UMHB, Brandon's passion for political science, history and religion developed over time into a fascination with the study of religion and politics within a sociological context. His work as an undergraduate in conducting ethnographic research on a local Methodist church with an aging congregation and, later, a quantitative inquiry into the demographic data, religious practices, and beliefs of politically liberal Evangelicals affirmed his desire to work in researching sociology. He was attracted to Baylor by its distinguished faculty who contribute a variety of expertise in the sociology of religion, its emphasis on pedagogy, and the opportunity to work with the Baylor Religion Survey firsthand.

Brandon's primary goal upon graduation from Baylor is to become a university professor and an active contributor to the field of the sociology of religion.