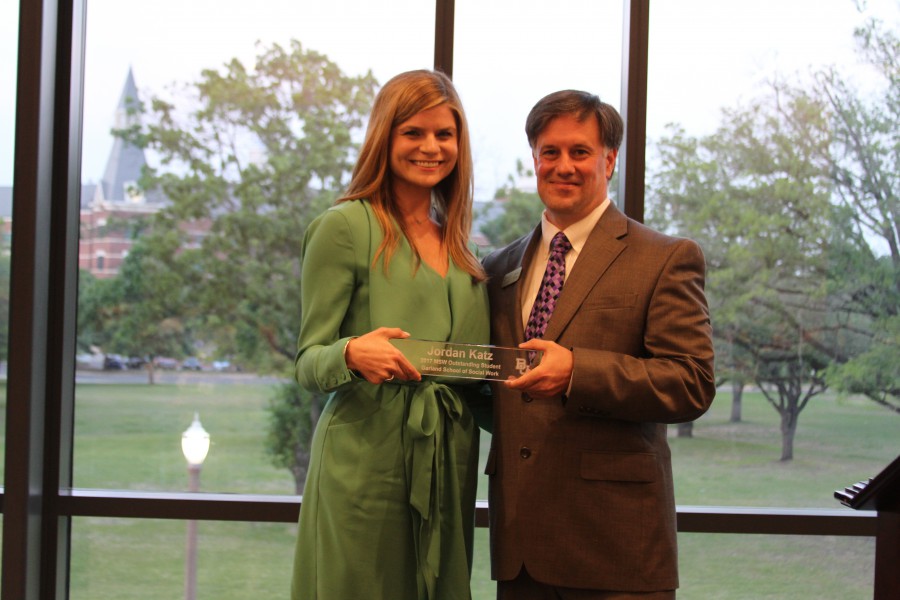 Previously participating in a fast-paced public relations job in New York City, Jordan Katz has no reservations about diving headfirst into her newfound passion of social work. After relocating to Houston and being admitted to the MSW program at the Garland School of Social Work, Jordan quickly proved herself as a top performing student, intern and advocate.

Through her mom’s guidance and influence, Jordan was able to make the jump from PR executive to social worker seamlessly. Growing up, Jordan watched her mom strive for success while selflessly caring for others. Jordan cites this positive influence as the catalyst for her eventual social work career change.

“One of the things I really enjoy is the challenge of it,” Jordan said. “This year, my internship was go-go-go every single day, and I like that. Having come from New York City, I am used to that atmosphere and fast-paced nature.”

“The beauty of having two social work internships is that you get to try the gamut of the profession,” Jordan said. “I wanted to focus on psychiatrics this year, and I ended up really enjoying it. I will be staying in this area after completing my degree.”

In the summer of 2016, Jordan worked with Dr. Elizabeth McIngvale on an independent study focused on Obsessive Compulsive Disorder. The research drove her interest in mental health and led to a specialization in OCD, Mental Health Stigma and Access to Care.

“I am very passionate about mental health,” Jordan said. “Last semester, I took a course called Advanced Theories and Models with Professor Becky Scott where we studied the DSM. I really enjoyed learning about the DSM-5 because I realized I saw many of the disorders in my patients. The class made me even more interested in mental health because I was able to connect the dots between my internship and my class work.”

The Houston Behavioral Healthcare Hospital, where Jordan interned this year, is an acute care facility. Patients could leave at any time, and it was this the day-to-day uncertainty she said was her biggest challenge. When the preferred therapeutic modality is group therapy, time and patience are essential in developing a rapport with patients to help them create and reach their goals. Jordan works diligently to build therapeutic alliance in the time she does have with her patients.

“I like to run groups that are open, and in order to do that, I find that a little self-disclosure works with patients,” Jordan said. “You have to understand patients are limited in their activities while in treatment, so there is always a nature of authority in the therapist-patient relationship. Because of this, I have found self-disclosure helps patients see they are not alone and opens up the floor for them to share their thoughts and feelings.”

This helps Jordan see the benefits of group facilitation. When patients are reluctant to open up, her tried-and-true method of self-disclosure, her use of the Shulman skills, and her respect for her patients usually aids in the shedding of patient reluctance. One patient begins to share, then another, then another. For Jordan, this is beautiful to watch.

“There is such a stigma around mental health and mental illness that as a social worker, I really want to work to break that stigma,” Jordan said. “I want to do the work to give a voice to those who struggle.”

Efficient and empathetic, Jordan strives to give her best to every client. Connecting her communication background with the ability to make her patients feel calm and comfortable allows Jordan to stand out in the field.

“I was completely surprised to win the MSW Outstanding Student Award,” Jordan said. “I wasn’t expecting it at all. It feels pretty amazing!” Jordan has accepted a position with an outpatient clinic in Philadelphia, Pa., focusing on children and adolescents diagnosed with Obsessive Compulsive Disorder.