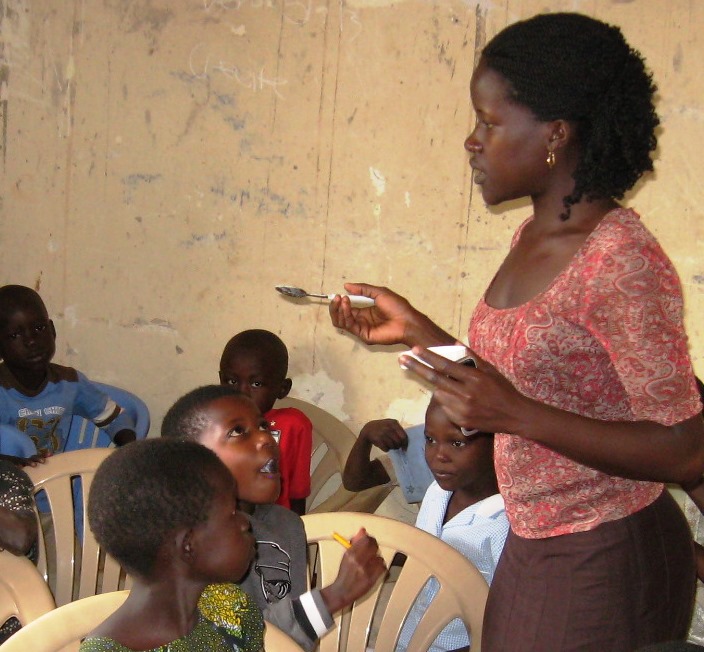 Julian Alum has many incredible stories of redemption and hope to share, yet when asked if there was one that stuck out to her, it seemed almost impossible. She sighed deeply and replied that there are so many stories that she gets to take part in, a flood of them are always in her mind. Her own story is one of great hope among challenging beginnings. She was sponsored by Compassion Ministries, while growing up in Kampala, Uganda with 4 siblings and a single mother. She would go on to work as an ambassador for Compassion, as well as project officer of development for orphans and vulnerable children, and later become a graduate of Diana R. Garland’s Global Missions Leadership Initiative in 2013. Since her graduation from the program she has worked as the Head of the Department of Social Work and Social Administration at Africa Renewal University and is currently working for USAID and Georgetown University’s Institute for Reproductive Health.

As we reflected on her life since graduating and her work in communities, on behalf of efforts in gender equality and the rights of the female child, she spoke of the importance of education and participation from all community members. She discussed the ever-present challenge of being a woman, herself, and entering many communities to discuss gender biases, gender inequity, and the limitations and dangers these attitudes have on the safety and opportunity of girls in their community. She spoke of her work in confronting issues of abuse, teen pregnancy, HIV/AIDs , school drop out rates, and gender-based violence She laughed again as she discussed the challenges she has faced in confronting gender issues in a room full of male community leaders. Her easy laugh in the face of adversities and her grace in moving through challenge reminded me of Proverbs 31:25, which states, “She is clothed with strength and dignity, and she laughs without fear of the future,” and what a reflection of strength, dignity, and fearlessness Julian is.

It is easy to feel overwhelmed by the work Julian has cut out for her within the communities she serves. She covers 625,00 households spanning across 17 counties in central Uganda. I can tell through our phone call, she is spent from a day of training mentors within the program, attending forum meetings, and staying connected with women’s ministry groups, yet her laugh continues to echo; her joy in what she does keeps her and those around her sustained, I feel sure of it. In development work, it can be agreed that there really is no end to that which can be done on behalf of progress. Luckily, for her corner of the world, Julian does not seem to tire easily. We talked of impact she sees in her community and what impact really means in gender attitude transformation work. She spoke of a community she worked with that was plighted with a number of child abuse cases. When she visited again, she was amazed by the community’s ability to identify resources to better protect their children and mobilize on behalf of advocacy and education of child rights. She said this is the definition of impact, of long term and sustainable change; when a community can begin to survive and thrive, regardless of her or any community developer always being there. The running joke in the Social Work profession is that we seem to work ourselves out of a job, if things are going well. In the case of Julian’s work, I cannot imagine her slowing down anytime soon. When I asked her what she looks forward to in her future work, her tone, for the first time became serious. She spoke of God’s mission he has placed on her life to speak positively into the lives of the girls and women she works with. She described her calling to be a mentor, a sister, and a mother to those without, and how her current work constantly reminds her that her country’s girls still need a woman’s positive voice. Her work is no where close to being done.

Julian Alum is a reflection of God’s servant heart, of a divinely appointed call to work on behalf the women and children of her country, and of spiritual gifts in leadership, knowledge, and ministry. Julian also embodies the social work profession’s demand for justice and empowerment through practice. It is an honor to graduate from the same program as Julian, and I am quite convinced that on behalf of all the women she mentors and minsters to, that they are made stronger and move more confidently into their future after knowing her.