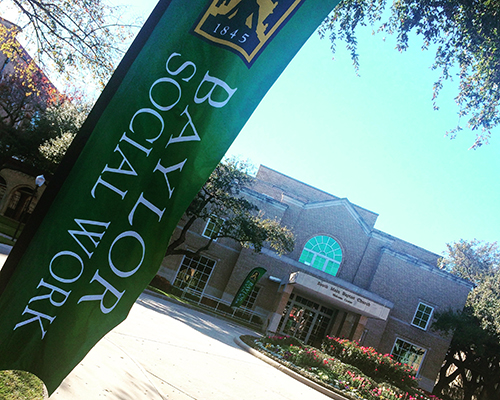 When her husband proposed, he did so with her deposit for Baylor. He told her he would always support her and never get in the way of her dreams. Lucky for her, and for those whose lives she’s touched since, this promise made to Joyelle Gaines was kept, and is a gift that carries with it an impact that continues to this day.

1. Why is it important for you to work with social work interns?
I always learn something new from my interns. It is very rewarding to go on a clinical journey with them. I feel so energized when we get into deep discussions on how to make a decision about ethical dilemmas, how to find a way to get unstuck in difficult cases, how to help them integrate what they learn in the classroom into practice and how to stay creative with the use of different theoretical modalities.

According to study after study, college students suffer food insecurity at alarming rates. Many face the reality of having no idea where their next meal will come from. Houston MSW student Joyelle Gaines hopes, however, to make this a thing of the past with a new venture called the Joy Store. The Joy Store is a student food pantry that opened this semester on our Houston Campus thanks to Joyelle’s advocacy, and she hopes it will help students just like her.

Jordan Katz thought she had her life all planned out when she graduated from her New Jersey high school in 2004. She moved to New York City, earned her BA in Public Relations from Hofstra University, and began what she believed would be an exciting new career as a PR executive. However, God had other plans for Jordan. After six years in the industry, she came to realize PR was not her calling. She wanted to make a difference in the lives of others and to do more than just be a link in the corporate chain. That’s when she found social work.

Joyelle is currently pursuing her Master of Social Work degree through the Garland School of Social Work, at our Houston campus. We sat down with Joyelle to ask her about her decision to pursue a career in social work, her experience in the program thus far, and her hopes and goals for the future. Read this inspiring story about a young woman who has big plans to serve others.