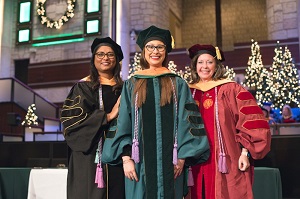 In the spirit of commemorating the success of our 2022 graduates, Baylor University Louise Herrington School of Nursing (LHSON) hosted its Pinning and Recognition Ceremony on December 16, 2022 at 1:30 p.m. at Sunnyvale First Baptist Church in Sunnyvale, Texas.

“Congratulations Baylor nurses! As these amazing students now embark on their professional journey the administration, faculty, staff, and alumni of the LHSON are incredibly proud,” said Linda Plank, PhD, RN, NEA-BC, Dean, LHSON. “Currently, we have 1,738 nursing students through our total nursing programs. From these students 383 are pre-nursing, 387 are Traditional, 71 are FastBacc®, 139 are DABSN while the remaining 758 are in our graduate online program of which 87 are CRNA’s.

Speaking of the CRNA students, this was LHSON’s second year to be joined by members of the United States Army. The U.S. Army Graduate Program in Anesthesia Nursing also known by its acronym USAGPAN is one of many Army-Baylor programs. This Doctorate of Nursing Practice (DNP) program is three years in length, with graduates testing for certification as a CRNA. LHSON is in academic partnership with USAGPAN and admitted its first Cohort in the summer of 2018.

Additionally, an award was given to the students who presented the most Outstanding DNP Projects including:

The day before the Pinning & Recognition Ceremony in a special event at the LHSON, nursing students received their cords to signify membership into Sigma Theta Tau International Nursing Honor Society and for the Baylor Student Nurses Association.

The ceremony offered a Blessing of the Hands given Dr. Sahr Mbriwa, Chaplain, LHSON. The special message represented the blessing of our nurses to be the hands of Jesus to bring comfort and healing to those they care for, and a dedication to a ministry of caring. The memorable day concluded with singing “That Good Old Baylor Line.”

About Baylor University Louise Herrington School of Nursing
The Baylor University Louise Herrington School of Nursing (LHSON) located in Dallas, Texas, was established in 1909 as a diploma program within Baylor Hospital in Dallas, which is now Baylor Scott & White Health’s Baylor University Medical Center, and in 1950 became one of the six degree-granting schools of Baylor University. The first Baccalaureate degrees were granted in 1952, establishing the School among the earliest baccalaureate nursing programs in Texas. In 1999, the School was renamed the Baylor University Louise Herrington School of Nursing after Louise Herrington Ornelas, a 1992 Baylor Alumna Honoris Causa, who made an endowment gift to the School. The LHSON offers Bachelor of Science in Nursing (BSN) degrees through Traditional, FastBacc® (one-year accelerated) and Distance Accelerated BSN programs. Plus, the LHSON offers an online Doctor of Nursing Practice (DNP) program with tracks that include Family Nurse Practitioner, Nurse-Midwifery, Neonatal Nurse Practitioner, Pediatric Nurse Practitioner, Adult Gerontology Acute Care Nurse Practitioner, Executive Nurse Leadership and U.S. Army Anesthesia Nursing (USAGPAN). The U.S. News & World Report 2022 Best Graduate Schools rankings include several LHSON programs, including the DNP program at No. 60 nationally and “Best Nursing” specialty rankings for LHSON’s USAGPAN, which operates at the U.S. Army Medical Center of Excellence at Fort Sam Houston in San Antonio, at No. 8 nationally, and Baylor’s Nurse-Midwifery program, which is No. 21 in the nation. In addition, U.S. News & World Report 2023 Best Undergraduate Nursing Programs ranked the LHSON No. 39. Learn more: www.baylor.edu/nursing
Are you looking for more News?
All NewsArchives