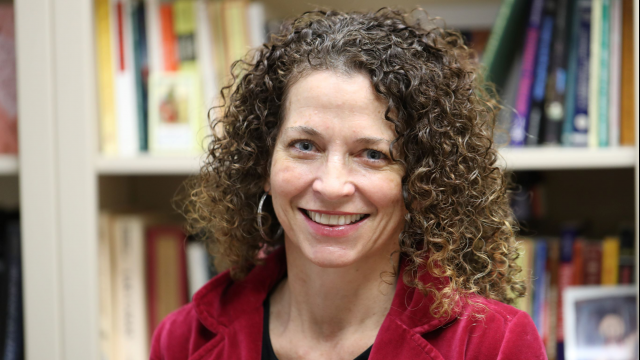 Cann will teach and conduct research in South Korea as the first Fulbright Scholar at Han Nam University, one of a few Christian universities in South Korea and where she was among its first American exchange students in 1990-91.

A noted researcher on death and dying, and the impact of remembering (and forgetting) in shaping how lives are recalled, remembered and celebrated, Cann will teach Han Nam’s seminary faculty on this topic and speak as part of Han Nam’s chapel series in spring and summer 2023. She also will conduct research on the rise of the country’s hospital funeral homes, examining the ways in which they promote religious pluralism, a topic that aligns with her current research on diversity in death, and the intersection of death and technology around the world.

“Because of Korea’s socialized medical system, the funeral home is where most hospitals make their money, which brings up some interesting ethical questions,” Cann said. “Daejon, the city where Han Nam is located, is often considered to be the ‘Silicon Valley’ of South Korea, so there are interesting things happening there in terms of technology, so I’m interested in examining what advances they are making in the area of death and technology, such as with virtual reality, so it really is the perfect place for me to be.”

Cann’s books include “Virtual Afterlives: Grieving the Dead in the 21st Century,” which centered on digital grief and memorialization in the contemporary world; “Dying to Eat: Cross Cultural Perspectives on Food, Death and the Afterlife” about the intersection of food in death and grief; and “The Routledge Handbook of Death and Afterlife,” an edited collection of 30 chapters examining death and afterlife from around the world. Her scholarly work also includes numerous articles and book chapters, including “African American Deathways” in Oxford Bibliographies in African American Studies.

With the COVID-19 pandemic adding to the already complex issues around end-of-life, death care and grief, Cann was involved with the Virtual Funeral Collective and a co-author of the article, “Death, Grief, and Funerals in the COVID Age,” which centered on optimal strategies for helping people develop new rituals to honor those who die during the COVID-19 era. The article’s resources and best practices for support during an unprecedented time were recognized and utilized by OptionB.org, National Hospice and Palliative Care Organization, Presidential Taskforce on Grief and Loss, and the New York State Psychological Association, among many others.

In addition to teaching and research, Fulbright Scholars like Cann play a critical role in U.S. public diplomacy, establishing long-term relationships between people and nations. Alumni include 61 Nobel Laureates, 89 Pulitzer Prize winners, 76 MacArthur Fellows, and thousands of leaders and world-renowned experts in academia and many other fields across the private, public and non-profit sectors. The Fulbright brings recognition to Baylor University, an R1 university with very high research activity and a premier Christian research university, while scholars’ engagement abroad often establishes research and exchange relationships, which Cann hopes to do in the future with Han Nam.

Cann is the second Baylor faculty member this year to receive the Fulbright U.S. Scholar Award. Leslie Palich, Ph.D., The W.A. (Agnes) Mays Professor of Entrepreneurship in Baylor University’s Hankamer School of Business, has received a Fulbright U.S. Scholar Award to Ireland and will work with the entrepreneurship faculty at Dublin City University in Ireland for the Fall 2022 semester.

ABOUT THE HONORS COLLEGE AT BAYLOR UNIVERSITY

The Honors College at Baylor University unites four innovative interdisciplinary programs – the Honors Program, University Scholars, Baylor Interdisciplinary Core and Great Texts – with a shared commitment to providing undergraduate students the opportunity to pursue questions that often fall between the cracks of the specialized disciplines by investigating the writings of scientists along with the writings of poets, historians and philosophers. For more information, visit baylor.edu/honorscollege.