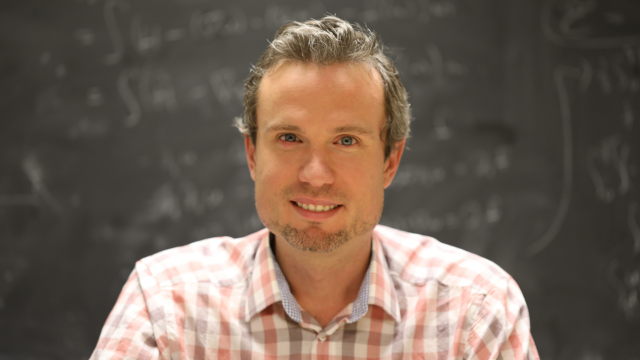 “I’m asking questions that are related to economics and large population dynamics and using game theory as a tool to create manageable mathematical models,” Graber said. “I’m interested in responding to real needs and using mathematical concepts to answer big questions like economic growth, wealth distribution and more. I feel very blessed to have received this grant.”

The NSF describes recipients of the highly coveted and competitive CAREER award as “early career faculty who have the potential to serve as academic role models in research and education and to lead advances in the mission of their department or organization.” .Graber’s award is the fifth NSF CAREER grant received by Baylor faculty members in the last 16 months, and the first of its kind received by a member of Baylor’s Department of Mathematics.

“Baylor’s mathematics department has been producing scholarship for some time, and this award signals that we are now more aggressive about pursuing support and visibility for the work that we do,” Baylor Provost Nancy Brickhouse, Ph.D., said. “This indicates that Baylor faculty are generating cutting-edge research that is a national priority. There also is a kind of prestige that goes along with a CAREER grant because it indicates that an external funding agency has selected them as someone they see as a role model teacher-scholar.”

The NSF award further advances Graber’s research in the mathematical analysis of partial differential equations (PDEs). PDEs feature multiple independent variables and account for how these variables interact with one another when another changes. PDEs are a common mathematical tool in interdisciplinary research – for example, Graber said, many physics laws can be expressed as differential equations – and are used to construct models with the potential to answer questions beyond the realm of physical science. With the support of the grant, Graber will build on that foundation to seek answers to questions about society through the application of game theory.

“The idea behind game theory is this that you take somebody at random from a population and ask the question, ‘What would this person do strategically to maximize his utility?’ Then, you can actually figure out from there what the entire population will do,” Graber said.

Game theory grew from the concepts of many mathematicians, including John Nash, whose story was made famous in the 2001 film A Beautiful Mind. Graber describes it as the study of a set of agents, making decisions simultaneously, whose decisions impact one another. As it relates to the economy, game theory can provide a framework to apply human behavior to answer questions about wealth distribution or the economic growth, as two examples.

“Let’s say you look at a phenomenon like economic growth,” Graber explains. “There are a ton of variables to take into consideration – time, the amount of wealth each individual has or how they allocate their money in investments versus consumption. With these variables, you have to ask, ‘As one of these changes, how do the others change?’ And that’s how you start to construct mathematical models with enough simplifying assumptions so you can get a model that’s reasonable to work with.”

In addition to research, all NSF CAREER awards feature an educational component that is funded through the grant to advance the recipient’s discipline. Graber will use the educational funding to create a new PDE course at Baylor with specific application to economics and related fields. Further, he will partner with Baylor University’s Mayborn Museum, where he will make public presentations on the subject.

“Dr. Graber is a rising star in the STEM fields at Baylor University and a great role model for those who follow,” said Lee Nordt, Ph.D., dean of Baylor’s College of Arts & Sciences. “NSF CAREER awards demonstrate that the faculty member is held in the highest standing of their particular program based on prior work and the proposal itself.”

As the first CAREER award earned by a Baylor math faculty member, Graber’s award is a milestone for his department and demonstration of the growth of Baylor research across the disciplines.

Baylor’s pursuit of R1 research recognition through the University’s Illuminate strategic plan is enhanced through external research funding and projects that address significant societal challenges. Grants such as Graber’s CAREER award accomplish both goals, while serving notice of the University’s growing research profile.

“It’s very exciting to see Jameson win this award, both for him and for the department as we in mathematics work to support the University’s push towards R1 research recognition,” said Dorina Mitrea, Ph.D., professor and chair of mathematics.

Graber is excited to see that impact on campus while maintaining a focus extending deep on the horizon and far down the line.

“It often happens that someone thinks of a big theoretical concept, and then 20 or 30, or even 100 years down the line, somebody else has a problem and realizes that a mathematician has been thinking about it decades ago and developed a way to look at the problem. And that’s how I see myself – an adventurer into the land of the theoretical, with the hope that we will create practical benefit.”