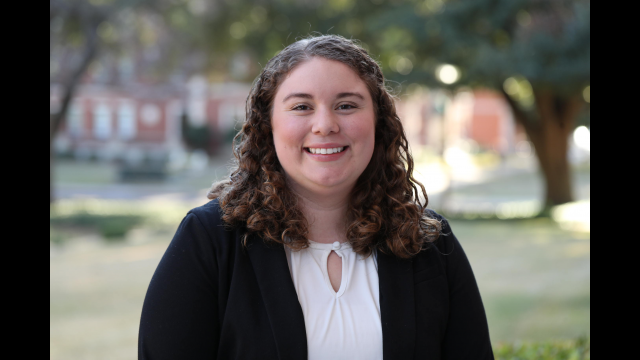 WACO, Texas (Dec. 3, 2019) – Gabbi Mucerino, a senior political science major at Baylor University from Lakewood, Colorado, has been awarded a 2020 Charles B. Rangel Graduate Fellowship following a highly competitive nationwide contest. Mucerino is the first Baylor student to receive the Rangel Fellowship, which is funded by the U.S. Department of State and administered by Howard University and supports extraordinary individuals who want to pursue a career in the Foreign Service of the U.S. Department of State.

The Rangel Fellowship will support Mucerino through a two-year master’s degree in an area of relevance to the Foreign Service, while also providing extensive professional development opportunities, including internships with the U.S. Congress and an overseas U.S. Embassy or Consulate, mentors and skills training. Fellows who successfully complete the program and Foreign Service entry requirements will receive appointments as Foreign Service Officers (FSO).

“The Rangel Fellowship is such an incredible opportunity because it pays for me to attend a two-year Master’s program, which I would not be able to afford otherwise,” Mucerino said. “Additionally, when I finish my degree, the Rangel Program commissions me as a Foreign Service Officer through the U.S. Department of State. This program is a fast track to my dream job.”

Still deciding on a graduate school as well as her career track with the Foreign Service, Mucerino hopes to bring together her two policy interests – gender equality and education – to help people around the world while working to pursue U.S. interests and make positive cross-government relationships. She aspires to develop programming that increases women’s economic opportunity, drawing on what she learned during her internship with the Secretary’s Office for Global Women’s Issues in Washington, D.C. She served this internship during fall 2018 as a member of the inaugural cohort of the Baylor in Washington Semester Program.

“It was both a thrill and an opportunity for growth, as I represented the Office at private-sector events and internal briefings. I met people from Syria, Jordan, Sweden, Norway, Yemen and Afghanistan,” she said. “My policy research focused on global trends in gender-based violence, women’s lack of economic opportunities and the diverse roles of female actors in terrorism. After researching the Women, Peace, and Security Act of 2017, which legislates that women must be included in peace negotiations, I became fascinated with female-focused foreign policy. During this time, I also interviewed over a dozen Foreign Service Officers, and I became really excited about working for the State Department abroad.”

Mucerino also has served internships with the U.S. Senate and the legislative and public policy practice group at Arnold & Porter Kaye Scholer LLP in Washington, D.C. At Baylor, she is external vice president of Baylor Ambassadors, a student advocacy group that represents Baylor at the state and federal level, and interns in the University’s Office of Government Relations.

Mucerino first heard about Baylor from a senior in her Spanish class at Calvary Christian Academy in Fort Lauderdale, Florida. She attended Spring Premiere, where she remembers being impressed with the faculty and Baylor’s reach all over the United States, and chose Baylor primarily because of its academic reputation and strong alumni base in the nation’s capital. At the last minute, she also applied for the Baylor Interdisciplinary Core (BIC) in the Honors College, which explores the interrelation of humanities and social sciences, providing students with a broad context to understand the contemporary world and thrive in any field.

“I was not disappointed. I have built a strong network with alumni and other professionals not only in Washington, D.C., but all over the country. A bonus to all of this was the BIC,” she said. “I cannot tell you how transformative and inspiring the BIC has been to my intellectual and professional development at Baylor. I am a more open-minded, intellectually challenged, cultured and respectful person because of my time in the BIC and the Honors College. I have been so blessed to develop so many mentors through the BIC Mentorship Program and with the professors. Baylor should be proud to have such a wonderful program on campus.”

Whitenton, who Mucerino considers her first mentor at Baylor, lauds her as a motivated individual with a curious, teachable independence, a strong work ethic and demonstrated potential in community and public service.

“Her intellectual curiosity, humility, rigorous argumentation and grit rank among the top 1% of students I have had the pleasure of teaching,” Whitenton said. “Gabbi’s sophistication in critical reasoning, impressive leadership experience to date and demonstrated record of public service combine to create a picture of a young leader whose commitment to her country and to promoting positive global change embodies the ideals of the Rangel Fellowship. I could not be prouder of her.”

Since Mucerino’s freshman year, Hamerly has encouraged her to be an FSO, with each of her classes with Hamerly helping her prepare for a life of public service.

“Gabbi has interned with the Department of State, a U.S. Senator and a law firm that proposes policy ideas to legislators in areas of health care, technology and education. All of these experiences have confirmed for her that the place where the world’s needs and her joy intersect is in public service,” Hamerly said. “She has the courage, resourcefulness and integrity that the Department of State looks for in FSOs.”

“As a student leader, Gabbi serves with courage, humility and the utmost integrity,” Farmer-Neal said. “She has continually demonstrated her commitment to public service and advocacy through her research on gender-based violence in transportation, as well as publishing original research and assisting in the development of educational policy. Her commitment to serving the Baylor community as well as the United States is commendable.”

For more information about the Charles B. Rangel International Affairs Program, visit www.rangelprogram.org.

For students interested in national and international merit awards:

While the Baylor classroom serves as the cornerstone of academic excellence and a rich undergraduate experience, Baylor undergraduates also are supported by the SPARK (Scholarship Programs, Awards, Research, Knowledge) program, housed within the Engaged Learning Office in Baylor’s College of Arts & Sciences. SPARK faculty and partners mentor students as they pursue national merit awards – such as the Fulbright, Truman, Gates Cambridge, Boren, Goldwater and many others – that will enrich their education. For more information about national and international scholarship opportunities through Baylor, visit www.baylor.edu/SPARK.

ABOUT THE CHARLES B. RANGEL INTERNATIONAL AFFAIRS PROGRAM

The Charles B. Rangel International Affairs Program is a U.S. Department of State program administered by Howard University under a cooperative agreement with the Office of Recruitment, Examination and Employment, Bureau of Human Resources (HR/REE). The Rangel Program aims to enhance the excellence and diversity of the U.S. Foreign Service. Begun in 2003, the Rangel Program selects outstanding fellows annually in a highly competitive nationwide selection process and supports them through two years of graduate study, internships, mentoring and professional development activities. Individuals who have successfully completed the Rangel Program are now serving as diplomats around the world, contributing to a more diverse representation and effective execution of U.S. foreign policy. More information may be found online at www.rangelprogram.org.