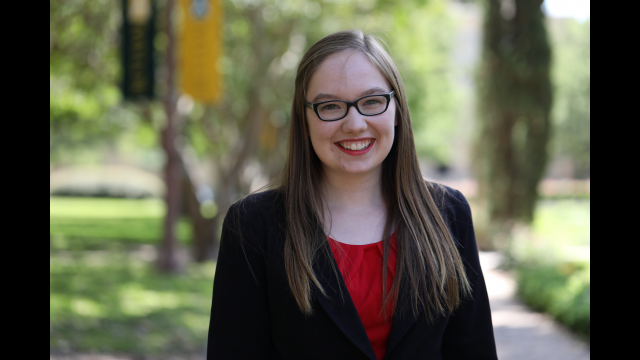 As the flagship international educational exchange program sponsored by the U.S. government, the Fulbright Program aims to increase mutual understanding between the people of the United States and the people of other countries. Fulbright ETAs are placed in classrooms abroad to provide assistance to local English teachers while also serving as cultural ambassadors for the United States.

Beginning this fall, Voth will serve as a Fulbright ETA in Mexico, with her city still to be determined. She became interested in Mexico after spending several years studying Spanish and Latin American politics. Following opportunities to study and serve in Guatemala and the Dominican Republic while at Baylor, the year-long Fulbright experience in Mexico will provide another valuable experience.

“Coming into college I had a hard time choosing between education and law, so I sought experience in both,” said Voth, who worked one summer in the Dominican Republic at a summer camp, where she taught English and loved the experience. “I have also discovered the overlap between education and the law. The legal system can be like a foreign language, especially to those who lack access to the justice system, and an attorney acts like a teacher, guiding clients through a complex process and opening up a new world of possibilities for them. I love the Spanish language and hope to work in international justice in Latin America later in my career.”

After her Fulbright ETA in Mexico, Voth plans to enroll at Pepperdine School of Law and get involved in the university’s global justice program.

Voth was one of the thousands of Baylor students, who are challenged to think beyond the classroom, get involved in active research and utilize the resources of the University to lay the groundwork for a successful future. In addition, Baylor cultivates a rich campus life that helps students grow intellectually, spiritually and emotionally.

“I originally only visited Baylor because I heard I would get a free T-shirt. When I came to visit campus, however, I found so much more than a free shirt,” Voth said. “Baylor offered the strongest sense of community I had seen at any university I had visited. Baylor also offered an amazing combination of strong academics with strong faith. I quickly saw that I would have the opportunity to grow in my faith and be mentored by some of the best faculty in the world.”

Voth took part in Baylor’s University Scholars Program, one of the most selective undergraduate academic programs at Baylor that generally accepts less than two percent of the University’s entering students. Students explore widely and experience the breadth of the University’s course offerings. As their intellectual passion and vocation become apparent, students work with faculty mentors to craft an individualized course of study in two or more disciplines. As she completes her undergraduate career at Baylor, she credits several faculty members, including professors in the Honors Program in the Honors College and higher education leadership in the School of Education, who supported and mentored her during her time at Baylor.

Honors Program Associate Professor Victor J. Hinojosa, Ph.D., whose primary research is in Latin American politics and U.S.-Latin American relations, described Voth as an “amazing student with a keen intellect, exceptional communication skills and a tremendous work ethic.” But Hinojosa said what “sets her apart is her passion for justice and her desire to use her many skills in the service of others.”

Hinojosa directed Voth’s honors thesis, which focused on the use of human rights trials and creative Christian reconciliation practices as ways of rebuilding society in the aftermath of dictatorship and human rights abuses in Guatemala.

“It was an excellent piece of work that combined her academic skills and training with her commitments to justice and reconciliation,” he said. “I know she will continue to put her skills to use in the service of marginalized communities in the United States and around the world. We will all be better for it and I look forward to following her career for years to come.”

Voth brings new ideas to age-old problems and is poised to make important contributions as a lawyer and advocate for the marginalized, said Tiffany Hogue, J.D., clinical professor of higher education leadership and policy.

“Rebecca is a brilliant scholar, committed Christian and wonderful all-around person,” Tiffany Hogue said. “It has been my joy and privilege to teach her.”

Andy Hogue, Ph.D., senior lecturer and director of the Philanthropy and Public Service Program in the Honors College, said since the day he met Voth, she has been the kind of student and leader who is eager to build bridges between the classroom and the world, identifying the spaces where her considerable intellect and skills can intersect with what the world needs most.

“In just the last two years, she has played a vital role in procuring and directing more than $135,000 to nonprofit organizations in Waco and around the globe, while she also has done transformational work to secure legal rights and opportunity for Syrian and Central American refugees—this, of course, on top of her work as founder and CEO of a Dallas nonprofit (Splash Inc.) that teaches water safety to under-resourced children,” Andy Hogue said. “We often see our role in higher education as helping launch students toward great things when they graduate. Rebecca launched a long time ago, and it has been, and will continue to be, our deep and abiding honor to watch her soar.”

Fulbright alumni have become heads of state, judges, ambassadors, cabinet ministers, CEOs, and university presidents, as well as leading journalists, artists, scientists and teachers. They include 59 Nobel Laureates, 82 Pulitzer Prize winners, 71 MacArthur Fellows, 16 Presidential Medal of Freedom recipients and thousands of leaders across the private, public and nonprofit sectors. Since its inception in 1946, more than 380,000 “Fulbrighters” have participated in the program.

Baylor students who seek a rich – even extraordinary – undergraduate education are supported by faculty affiliated with SPARK (Scholarship Programs, Awards, Research, Knowledge), which is housed in the Office of Undergraduate Studies in Baylor’s College of Arts & Sciences. Students mentored by SPARK professors apply for prestigious scholarships, fellowships, internships and research experiences at the national and international level, including the Fulbright, Truman, Gates Cambridge, Boren and Rhodes. Many of these awards support study and research at the graduate level. Baylor students also compete for other notable awards, such as the Goldwater, Pickering, Humanity in Action, Critical Language Scholarship and National Science Foundation Research Experience for Undergraduates (REU), that fund undergraduate student research and study.