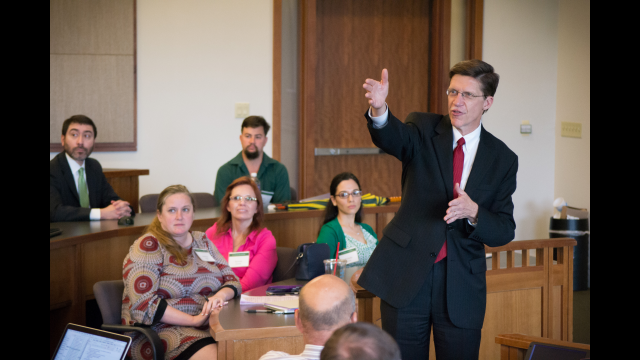 This year’s three-day program runs Aug. 16-18 in Fort Worth and is hosted by partner institution Texas A&M University School of Law. Attendees will attend workshops led by experts in numerous areas ranging from business planning and alternative fee arrangements to marketing, client relations and community involvement.

“We believe in the rule of law and the people’s right to access the courts and lawyers for help,” said Stephen Rispoli, assistant dean of student affairs and pro bono programs at Baylor Law School. “Legal Mapmaker is one of the programs designed by Baylor Law School, in partnership with all other Texas law schools, to assist lawyers and law students by teaching efficient law firm management practices while addressing the access to justice gap in our country.”

More than 100 million poor and middle-income Americans cannot afford representation for basic human needs, according to a study cited in the American Bar Association’s 2016 “Report on the Future of Legal Services in the United States.” Basic human needs are defined in the report as cases related to shelter, sustenance, safety, health and child custody.

“We are pleased that the Baylor Law Legal Mapmaker program has been so well-received by the legal education community in Texas, as well as by the practicing bar,” said Baylor Law School Dean Brad Toben. “Texas A&M University School of Law is graciously hosting this year’s program and we look ahead to the event being educational and productive for each attendee.

Established in 1857, Baylor Law School was one of the first law schools in Texas and one of the first west of the Mississippi River. Today, the school has more than 7,400 living alumni. It is accredited by the American Bar Association and is a member of the Association of American Law Schools. Baylor Law School has a record of producing outstanding lawyers, many of whom decide upon a career in public service. The Law School boasts two governors, members or former members of the U.S. House of Representatives and the U.S. Senate, two former directors of the FBI, U.S. ambassadors, federal judges, justices of the Texas Supreme Court and members of the Texas Legislature, among its notable alumni. In its law specialties rankings, U.S. News & World Report ranked Baylor Law’s trial advocacy program as #4 in the nation. Baylor Law School is also ranked #55 in the magazine’s 2017 edition of "America’s Best Graduate Schools." The National Jurist ranks Baylor Law as one of the "Best School for Practical Training," and #4 in the nation in its most recent "Best Law School Facilities" listing. The Business Insider places Baylor Law among the top 50 law schools in the nation. Baylor Law School received the 2015 American Bar Association Pro Bono Publico Award, making it only the third law school in the nation to be honored with the award since the award's inception in 1984.