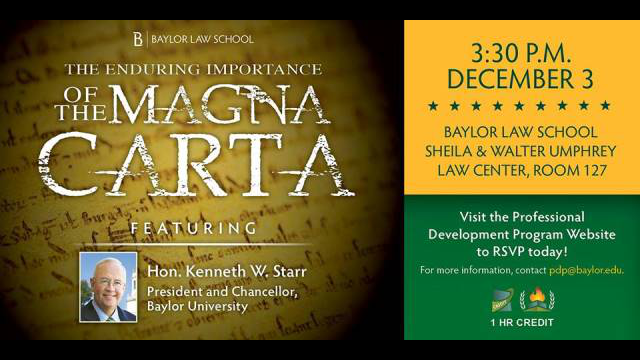 WACO, Texas (Dec. 2, 2015) – In honor of the 800th anniversary of the Magna Carta, a document widely considered as one of the most important in history, Baylor University President and Chancellor Ken Starr will share his thoughts on the importance of the charter.

The sealing of the Magna Carta, also known as the Great Charter, was “foundational in the development, over the centuries, of the rule of law and basic rights and freedoms of the citizenry in England,” said Brad Toben, dean of Baylor Law School. “The principles of the Magna Carta inspired our Founding Fathers in the struggle for independence and the revolution that gave rise to our republic.”

The Magna Carta was issued by King John of England in 1215, first establishing the principle that everybody, including rulers and government officials, is subject to the law.

As President Starr addresses law students, he will discuss how the Magna Carta relates to students’ duty to uphold the rule of law as future lawyers.

“The post-Magna Carta period, so to speak, is now 800 years old. Control on arbitrary power. Guaranteeing basic individual rights. Every person, no matter how powerful, is under the law,” Starr said. “These are the abiding principles of Magna Carta, which are worthy of celebration.”

President Starr serves on the faculty of Baylor Law School as the Louise L. Morrison Chair of Constitutional Law and teaches a seminar on current constitutional issues. He has argued 36 cases before the U.S. Supreme Court, 25 of which were during his time as Solicitor General of the U.S. from 1989 to 1993.

“Scripture reminds us that the generations come and the generations go, but the earth remains forever. Like our planet itself, Magna Carta seems destined to remain forever,” Starr said.

This event is free and open to the public. To RSVP for the event, click here. Baylor Law School is located at 1114 S. University Parks Drive.

Established in 1857, Baylor Law School was the first law school in Texas and one of the first west of the Mississippi River. Today, the school has more than 7,000 living alumni. It is accredited by the American Bar Association and is a member of the Association of American Law Schools. Baylor Law School has a record of producing outstanding lawyers, many of whom decide upon a career in public service. The Law School boasts two governors, members or former members of the U.S. House of Representatives and the U.S. Senate, two former directors of the FBI, U.S. ambassadors, federal judges, justices of the Texas Supreme Court and members of the Texas Legislature, among its notable alumni. In its law specialties rankings, U.S. News & World Report ranked Baylor Law’s trial advocacy program as the third best in the nation. Baylor Law School is also ranked No. 51 in the magazine’s 2015 edition of “America’s Best Graduate Schools.” The National Jurist ranks Baylor Law in its top 10 law schools for practical training, and second best value in private legal education in the nation. The Business Insider places Baylor Law among the top 50 law schools in the nation. Learn more at www.baylor.edu/law.