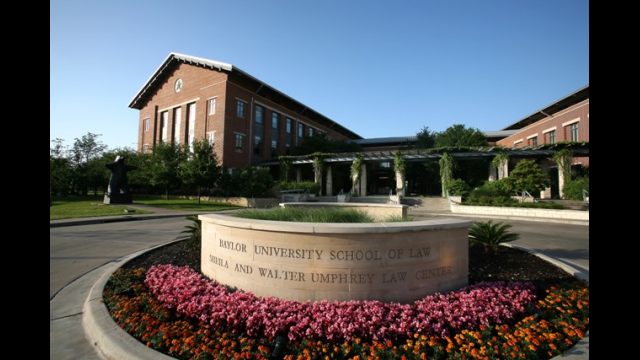 WACO, Texas (Sept. 12, 2012) - Baylor University's Law School will begin operating a clinic to assist those who may be eligible for the Deferred Action for Childhood Arrivals (DACA) program. An estimated 150,000 young unauthorized immigrants in Texas are eligible for relief from immediate deportation.

The clinic is in response to President Obama's executive order which allows those who entered the United States as children to remain in the country and work without fear of deportation for a period of two years. It will operate from 6:30 to 10 p.m., Sept. 18, 20, 25 and 27 and Oct. 2 and 4 at the Baylor Law School campus, 1114 S. University Parks Drive.

The Baylor Law School DACA Immigration Clinic is stepping up to help with cumbersome and sometimes confusing paperwork.

Under the direction of Laura A. Hernandez, associate professor of law, and Waco attorney and Baylor Law alumna Susan Nelson, second- and third-year law students will assist applicants in filling out the paperwork needed to take advantage of the program.

"The DACA program is aimed at those immigrants who are between the ages of 15 and 31," Hernandez said. "They are commonly referred to as 'Dreamers' after the Dream Act, which has not yet become law. These young people came to this country before they were 16, were educated in the American school system and for all intents and purposes are American. While the DACA program is not a path to citizenship, it is an opportunity for these immigrants to become lawful, tax-paying residents."

This the second clinic launched this month by Baylor Law to help members of the community with little or no access to legal services. Through a grant from the Texas Access to Justice Foundation, Baylor Law also is providing assistance to military veterans. The Baylor Law School Veterans' Clinic begins Sept. 14 at the Mission Waco Meyer Center, 1226 Washington Ave.

"At Baylor Law, we pride ourselves on developing both great lawyers and great citizens," said Baylor Law School Dean Brad Toben. "The immigration and the veterans' clinics are not only a way for our students to gain valuable experience, but perhaps more importantly, to also discover and understand the positive impact their knowledge and skills can make in the lives of people whose voices might not otherwise be heard."

On June 15, the U.S. Department of Homeland Security (DHS) announced the DACA program that could delay deportation for unauthorized immigrants between the ages of 15 and 30 if they:

If the criteria are met, the young applicants may apply for a deferred action permit that protects them from being deported for two years and possibly allows them to qualify for work authorization. At the end of the two-year deferment period, they can apply for a two-year renewal pending a review of their case. Unauthorized immigrants in the midst of deportment proceedings or who have received a deportation order - including those under age 15 - also may apply for the deferral if they meet the DHS guidelines.

DHS stresses that the DACA program does not provide a path to permanent residence status or citizenship. In addition, immediate relatives or dependents of those who qualify for the program will not be considered for a deferment.

Established in 1849, Baylor Law School was the first law school in Texas and one of the first west of the Mississippi River. Today, the school has more than 7,000 living alumni. It is accredited by the American Bar Association and is a member of the Association of American Law Schools. Baylor Law School has a record of producing outstanding lawyers, many of whom decide on a career in public service. The Law School boasts two Texas governors, members or former members of the U.S. Congress and U.S. Senate, two former directors of the FBI, ambassadors, federal judges, justices of the Texas Supreme Court and members of the Texas Legislature among its notable alumni. In its law specialties rankings, U.S.News & World Report ranked Baylor Law's trial advocacy program as the third best in the nation. Baylor Law School is ranked No. 56 in the magazine's 2012 edition of "America's Best Graduate Schools."