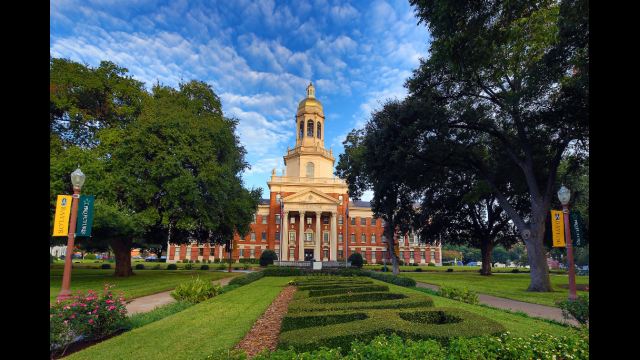 WACO, Texas (Nov. 2, 2018) – During its annual Homecoming meeting, the Baylor University Board of Regents celebrated the public launch of Give Light: The Campaign for Baylor, as the University moves forward under its first-ever comprehensive philanthropic campaign. Give Light undergirds Illuminate, the University’s Academic Strategic Plan, and impacts every aspect of campus life – academics, athletics, student life and service learning – while also bolstering financial support for students, faculty and the entire campus community.

With the launch of the public phase of Give Light on Nov. 1, the University celebrated the success of a silent phase that already has propelled the campaign to nearly half its goal. Fundraising during the silent phase began with the establishment in May 2014 of five-year goals connected to the University’s strategic vision, Pro Futuris. Since that time, members of the Baylor Family have given $541.8 million – including 97 gifts of more than $1 million – and positioned the University for success in raising a total of $1.1 billion.

“Our commitment to position Baylor as the preeminent Christian research university has never been stronger,” said Baylor President Linda A. Livingstone, Ph.D. “For more than 170 years, Baylor has served as a source of illumination and inspiration to communities close to home and around the globe. In pursuing the success of Illuminate, we will articulate and embody an exceptional vision for 21st-century Christian higher education and produce graduates with the wisdom, innovation and leadership skills required to make a difference in the world.”

The campaign launch also included the announcement of a lead gift – recognized as one of the largest in Baylor’s 173-year history – from Mark and Paula Hurd that will create the Mark and Paula Hurd Welcome Center, a 50,000- to 60,000-square-foot facility will create a “front door” to Baylor’s campus at the intersection of University Parks Drive alongside Interstate 35.

The Mark and Paula Hurd Welcome Center is designed to create interest and enthusiasm in the University through a high-tech and interactive experience and serve as the epicenter for academic, cultural and social activities. Future strategic development of the property surrounding the new facility is anticipated to include businesses that will solidify the center as a travel and visitor destination for both Baylor and the Waco community.

Mark Hurd is a 1979 graduate of Baylor’s Hankamer School of Business and current CEO of Oracle. He also serves as a member of the Oracle Board of Directors and the Baylor Board of Regents.

“As we celebrate the official launch of Give Light, we are filled with deep appreciation for Mark and Paula Hurd’s leadership as co-chairs for our campaign and for their inspirational gift that will transform the Baylor campus,” President Livingstone said. “As they have on many occasions, Mark and Paula have stepped forward as champions of excellence and as shining lights for the vital role Baylor plays in higher education as a Christian research university.”

On Friday, President Livingstone also updated the Board on several University matters, including:

In other Board news, Regents received an update on the University’s Alumni-elected Regent process, for which nominations are being accepted through November. Since October 2015, more than a third of the Board is new, “bringing new ideas, new perspectives and new backgrounds,” said Joel T. Allison, B.A. ’70, chairman of the Board. “This is an important opportunity for our alumni to participate in the governance of the University.” The guidelines and full timeline for the Alumni-elected Regent process is online at alumniregents.web.baylor.edu.

The Board also heard from a panel of Baylor students, who discussed faith formation and character development at the University. Following the recommendation from the Task Force on Character and Spiritual Formation, Baylor researchers have initiated an unprecedented longitudinal study to track the long-term impact of a Baylor education on a person’s faith and character.

First-year Baylor students participated in three surveys this fall to develop a baseline on students’ religiosity and character. Researchers currently are surveying alumni who graduated 10 years ago with a similar set of questions and also will conduct the survey with senior Baylor students at the end of the spring semester. This ongoing research project will collect information each year about students’ faith and character from when they arrive at Baylor, when they graduate and a decade after graduation to examine how a Baylor education impacts their development of faith and character over time.

“This project will help us better understand where students are in their faith, why they change, how they grow and what in their Baylor journey is most impactful,” President Livingstone said. “We believe the findings from this research will be profoundly important for Baylor, as well as for other faith-based colleges and universities, so we can all understand better what most influences the spiritual and character development of young people while they’re in college. We want to ensure this continues to be an important part of their life after college.”

In Board action, Regents approved $2.5 million for the Phase 1 renovation of the Waco Hall complex to address accessibility and other issues in Waco Hall, Waco Hall East and Roxy Grove Hall. The first phase of the project, which will begin this summer, will include construction of ADA-compliant exterior ramps and courtyards, the addition of an elevator and stairway inside the building and design planning of future interior accessibility improvements.

The Board also approved updates to the University’s Endowment Investment Policy and to the Board Policy on Executive Compensation. The update to this compensation policy, which aligns with best practices in higher education, raises the reporting threshold for salaries reviewed by the board from $250,000 to $375,000. The policy also takes into account individual reporting relationships at the university.

“Baylor University is moving forward with a bright future ahead,” Allison said. “We are very pleased with the progress the University is making under the leadership of President Livingstone, working in conjunction with our outstanding faculty, staff and students. We also are deeply appreciative of the support of the University from throughout the Baylor Family, especially with the launch of the Give Light campaign for the future of Baylor University. Two of our Board members, Mark Hurd and Mark McCollum, have already stepped forward with significant gifts, and we expect more transformational gifts in the months ahead that shine a light on the promise of Baylor’s future and provide a strong foundation for Baylor as a preeminent Christian research university today and for generations to come.”