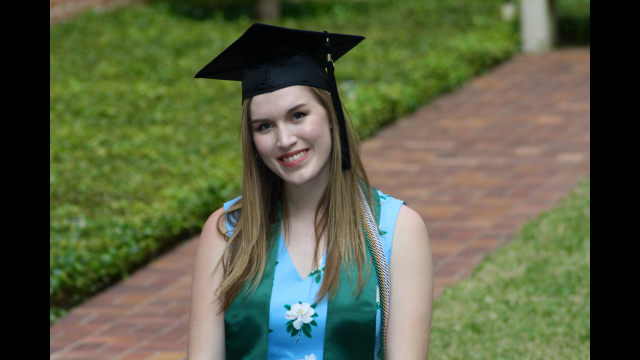 WACO, Texas (May 24, 2018) – Hannah Byrd, B.A. (Arabic and Middle East Studies/International Studies) ’18, has been awarded a Middle East and North Africa Regional (MENAR) Fellowship, an international program that fosters a new generation of U.S. leaders in service, politics and policy who have experience with the challenges the region faces and the potential it holds. She is the first Baylor graduate to earn the prestigious post-graduate fellowship.

As a MENAR Fellow, Byrd will teach English to children ages 2-14 with Club Anglais in La Marsa, Tunisia.

“After devoting my undergraduate education to the study of Arabic and the history and culture of the Middle East, I wanted to immerse myself in the world I had learned about from lectures and textbooks,” Byrd said. “Dr. Kirsten Escobar, SPARK adviser and a dear mentor to me, suggested I apply to the MENAR Fellowship as it would give me the opportunity to live and work in the Arab region following graduation.”

The MENAR program offers Fellows an opportunity to engage with the people and institutions of the Middle East through high-impact, professional fellowships and provides service organizations with passionate young professionals who can forge a bridge between the U.S. and the region and aid in the region’s development.

After she completes her MENAR Fellowship, Byrd plans to pursue opportunities for research focused on advancing human rights internationally and specifically in the Middle East.

“Eventually, I hope to obtain a graduate degree in international relations or political science,” she said.

Byrd has a long history as part of the Baylor Family, with her parents and older brother all graduating from Baylor.

“My family encouraged me to choose to attend Baylor as an undergraduate,” Byrd said. “Once I arrived here, I soon learned for myself why they love Baylor so much. Baylor’s caring faculty and staff make the undergraduate experience highly individualized and truly remarkable.”

Baylor’s mission is to educate students for worldwide leadership and service by integrating academic excellence and Christian commitment in a caring community, with faculty who prepare students for a path of excellence, discovery and achievement in their professional careers. Byrd’s mentors include Mark Long, Ph.D., associate professor of the Baylor Interdisciplinary Core in the Honors College and director of Middle East Studies; Ivy Hamerly, Ph.D., senior lecturer in political science and director of the international studies B.A. program; and Richard P. Jordan, Ph.D., assistant professor of political science in the College of Arts & Sciences.

“Dr. Long has been a key encourager of my passion for working in the Middle East. His own life, defined by service to others, inspires me to work for something greater than myself,” Byrd said. “Dr. Ivy Hamerly has been an indispensable mentor to me. Her courses have stretched my abilities as a writer and thinker, and she has taught me valuable professional lessons. She not only encourages me to pursue my dreams, but shows me the tools I need to achieve them. Dr. Richard Jordan taught an independent study on Grand Strategy for a small group of seniors, of which I was fortunate to belong, that challenged me as a student and revealed new interests that I would like to pursue in the future.”

Byrd took several classes with Long, beginning as a freshman with World Cultures. “Over the several years that I had Hannah in class, I discovered her to be an exceptionally intelligent and remarkably articulate young woman. But more than that, I found that she possesses unusual courage and an obvious determination to acquire the cultural and linguistic skill set to effect meaningful change in the lives of women in the Middle East,” Long said. “The MENAR will be a critical component in equipping her to do so.”

Although Byrd’s primary interest is in the Middle East, she wrote such an outstanding research paper in Hamerly’s Politics of Western Europe class that Byrd was invited to present her research at the Claremont-UC Undergraduate Conference on the European Union. She also published the paper in the 2018 volume of The Claremont-UC Undergraduate Research Conference Journal.

“Hannah is an extraordinarily brilliant, mature, kind and hard-working person. Not only did she graduate from Baylor with a perfect 4.0 GPA, but she also gave of her time and talents to help other people,” Hamerly said. “She volunteered as a mentor to local middle school girls through a Baylor student organization called Pursue Mentoring Organization. In her internship with the U.S. Department of State, she led a Talking Movies Club with the U.S. Embassy in Libya that helps English language learners from Libya practice their language skills and learn about American culture. I know the MENAR Fellowship is only the beginning of all the wonderful opportunities Hannah will have.”

Jordan said Byrd is among the brightest students he has taught. “I don't doubt the MENAR program will advance her already-impressive knowledge of the Middle East and North Africa,” Jordan said. “She has the raw ability to become a vital American asset when dealing with the region. I hope and expect that others will perceive her talents and put them to good use in the service of our nation.”

“Both Dr. Escobar and Dean (Betsy) Vardaman in the SPARK office have been tremendous encouragers from my freshman to senior year,” Byrd said. “Their tireless work behind the scenes assisting students with applications like these infinitely expands Baylor students' opportunities.”