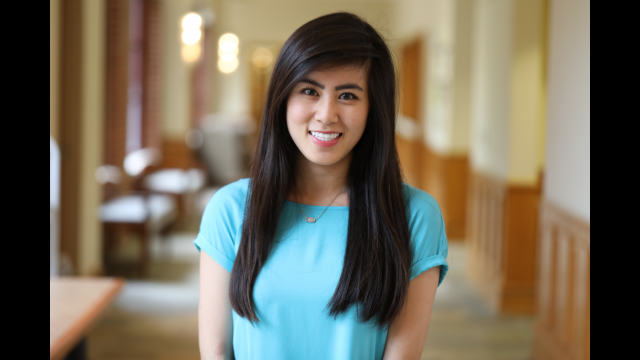 Christina Gaw, a sophomore biochemistry and anthropology major at Baylor University, has been selected to receive the prestigious Barry Goldwater Scholarship for undergraduate research in the STEM fields. (Robert Rogers/Baylor University)
Tweet
May 23, 2018

WACO, Texas (May 23, 2018) – Christina Gaw, a sophomore biochemistry and anthropology major at Baylor University, has been selected to receive a Barry Goldwater Scholarship, one of the oldest and most prestigious national awards for undergraduate researchers in mathematics, the natural sciences and engineering.

Based on her academic merit, Gaw is among 211 Goldwater Scholars selected from a field of 1,280 STEM student nominees nationwide. The two-year scholarship will cover the cost of tuition, fees, books and room and board up to a maximum of $7,500 per year.

“I was actually in the car with my mom when I received the email, and they were right on time with posting the results,” Gaw said. “I’m very honored to have won the award because it represents a lot of the work I have done during my time at Baylor, and I was excited to let my recommendation letter writers and those who have helped me throughout the application process know the results of all the work we had been putting into the competition.”

The Goldwater Scholarship Program seeks to identify and support college undergraduates who show exceptional promise of becoming the next generation of U.S. research leaders in critical STEM fields. Each year, Baylor is only allowed to nominate four students to compete nationally for a Goldwater Scholarship, said Jeffrey S. Olafsen, Ph.D., associate professor and undergraduate program director in physics in the College of Arts & Sciences and Baylor’s Goldwater representative.

“As a sophomore awardee, Christina will receive two years of support from the Goldwater program as opposed to the more commonly awarded junior recipient that obtains a single year of support,” Olafsen said. “To win a Goldwater Scholarship as a sophomore speaks to both the strength of her application on the national stage and the high quality of the research she has had the opportunity to involve herself in at Baylor University.”

As undergraduates, Baylor students gain opportunities to contribute to research typically found only at the graduate level. Undergraduate research has been an area in which Gaw has excelled at Baylor under faculty mentors Touradj Solouki, Ph.D., professor of chemistry in the College of Arts & Sciences, and Tamarah L. Adair, Ph.D., senior lecturer in biology, and Alyssa Carlson Johnson, an organic chemistry graduate student who mentored Gaw during a high school summer research program.

“The faculty here at Baylor has really been supportive about pursuing these kinds of opportunities,” Gaw said.

As Gaw’s research adviser in the department of chemistry and biochemistry, Solouki saw Gaw’s early potential by inviting the then-freshman to be an active member of his research team, which is focused on successful coupling of a vacuum ultraviolet (VUV) spectroscopy unit to mass spectrometry (MS). His team’s tandem VUV-MS system is the only of its kind worldwide and can provide unique “fingerprinting” of chemicals present in complex biomedical and environmental samples.

Now a sophomore member of Solouki’s team, Gaw has been a co-author of conference presentations, including the proceedings of American Society for Mass Spectrometry (ASMS). She also presented at the Regional Undergraduate Research Symposium at Rice University as the first and fourth author in two separate contributions, and is a co-author on two manuscripts that have either been reviewed favorably for publication or are under review.

“Throughout my academic career, I have been fortunate to advise many talented and outstanding undergraduate students who have successfully continued their academic endeavors to become successful scientists, medical doctors, dentists and researchers,” Solouki said. “Among all of my previous second-year undergraduate students, Christina takes the first place in academic achievements, creativity, drive, ethics, kindness, productivity and interest in high-end research. She truly is an outstanding young learner with enormous potential for becoming a leader in her chosen field of biomedical research.”

After joining Solouki’s lab, Gaw was one of the 24 students in Adair’s two-semester, discovery-based undergraduate research course, which is a part of the Science Education Alliance-Phage Hunters Advancing Genomics and Evolutionary Science (SEA-PHAGES) program and supported by Howard Hughes Medical Institute. The course is rigorous and models the process of science through introducing students to foundational lab skills and authentic research questions. After getting to know Gaw, Adair ranks her as “one of the most promising science students that I have met” in the last decade.

But Adair noticed something special about Gaw before she even came to Baylor, as she participated in two summer research programs.

“It is rare to find a high school student interested in spectrophotometric analysis and even rarer to find one that has sought out and succeeded in being admitted to two competitive research programs,” Adair said.

In a semester focused on DNA sequence analysis, Gaw worked in a small group that used bioinformatics software to compare the DNA sequence of their genomes to previously published sequences. Her group completed the annotations of two bacteriophages named Nubia and Saphira, which have been published, with Gaw included as an author for the GenBank submissions and Genome Announcement.

“There is a steep learning curve for first-year students to use the software and understand how to interpret the data,” Adair said. “Christina again demonstrated her inquisitive nature and abilities by leading her group through the process.”

Gaw also traveled with Adair’s research group to a regional SEA-PHAGE Research Symposium and presented a poster on her preliminary annotations.

“Christina’s professionalism and confidence was recognized by other scientists at the meeting. She not only presented her work during the poster session, but visited as many posters as possible to learn what other groups were studying,” Adair said. “Her education and intrinsic motivation have prepared her to perform research at a level equal to many graduate students, and I look forward to watching her mature as a scientist.”

Opening Doors to the Future

In addition to her Goldwater, Gaw is one of six students selected for the Baylor2 Medical Track Program, a combined eight-year baccalaureate/M.D. program in which students are given provisional acceptance into Baylor College of Medicine after their undergraduate degree is earned. She hopes to earn an M.D. in oncology and potentially a Ph.D. in biomedical sciences, then work at an academic research hospital, conducting research related to biochemical techniques that could lead to early disease detection. She also hopes to have opportunities to interact with patients and also teach.

“I think the Goldwater will open a lot of different doors for my future,” she said. “Since it is research focused, I think in the future it will help me be able to gain more research opportunities and be able to possibly branch out in different areas of science research nationally.”