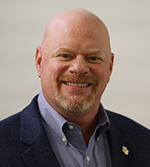 Clinical Professor in the Honors Program

Dr. Walter “Sparky” Matthews joined the Honors Program faculty in 2020 after retiring from the U.S. Air Force as the 1st Surgeon General of the United States Space Force.  He earned a B.A. in Biology/Pre-Healthcare from Baylor University, a M.P.H. from the University of Texas Health Science Center, and a M.S. in National Security Strategy from the National War College.  Dr. Matthews earned his M.D. from Baylor College of Medicine, and is board-certified in both Aerospace Medicine and Public Health & General Preventive Medicine.  He teaches courses on the history of medicine, pathophysiology, and freshman seminars on leadership as a physician.  Dr. Matthews is a highly decorated Air Force officer, retiring with the rank of Colonel.  During his career, he achieved 1,113 flight hours in 26 weapon systems, including 197 combat hours and 42 combat support hours.  Dr. Matthews was elected Fellow of the Aerospace Medical Association in 2019.

“The Relationship between Cigarette Smoking and Other Poor Health Behaviors in a Young Adult Population,” Public Health Master’s Thesis (2000)