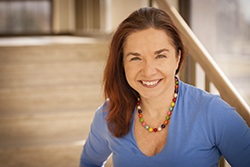 Dr. Katharine Hayhoe is an accomplished atmospheric scientist and professor of public policy who studies climate change, one of the most pressing issues facing humanity today, rife with implications for ecology, economics, food security, geopolitics, urban development, and more. It is a global, transnational phenomenon with universally experienced impacts. Katharine is also a remarkable communicator who has received the National Center for Science Education’s Friend of the Planet award, the American Geophysical Union’s Climate Communication Prize, the Sierra Club’s Distinguished Service award, and been named to a number of lists including Time Magazine’s 100 Most Influential People, Foreign Policy’s 100 Leading Thinkers, FORTUNE magazine’s World’s Greatest Leaders and the United Nations Champion of the Earth in Science and Innovation. But Katharine may be best known because of how she’s bridging the broad, deep gap between scientists and Christians—work she does in part because she’s a Christian herself. She’s been named by Christianity Today as one of their 50 Women to Watch, she serves as the World Evangelical Alliance’s Climate Ambassador and as the science advisor to A Rocha USA, the Evangelical Environmental Network, Young Evangelicals for Climate Action, and she currently hosts the PBS digital series, Global Weirding: Climate, Politics and Religion.

Katharine’s writing has appeared in a broad range of outlets including the New York Times, Wired, O Magazine, and Chatelaine. Her TED talk, “The most important thing you can do to fight climate change: talk about it” has nearly 4 million views and her most recent book, Saving Us: A Climate Scientist’s Case for Hope and Healing in a Divided World, was published by Simon & Schuster in Sept 2021. Katharine has served as lead author on the Second, Third, and Fourth National Climate Assessments. She serves on advisory committees for a broad range of organizations including the Smithsonian Natural History Museum, the Earth Science Women’s Network, and the American Association for the Advancement of Science. Katharine serves as Chief Scientist for The Nature Conservancy and as a Paul W. Horn Distinguished Professor and the Political Science Endowed Chair in Public Policy and Public Law at Texas Tech University.

The Laura Blanche Jackson Lectureship in World Issues was established in 1995 by Laura's parents, Frank and Darba Jackson and many other family members and friends. In memory of Laura, the lectureship is dedicated to piecing together a larger picture of the individual issues that contribute to today's world affairs.