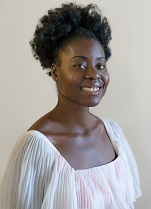 Dr. Mougoue' will be teaching in the African Cultural Studies Department at the University of Wisconsin-Madison in 2019/2020.

As a feminist historian of Africa, I am particularly interested in the gendering of identities in modern Africa. I focus on the gendering of identities in state politics, body politics, and religious politics in twentieth-century Cameroon. I demonstrate the larger importance of gender relations and the construction of gendered identities, illuminating the lived realities of people who endeavor to challenge and renegotiate identities in changing political, social, and religious landscapes. In doing so, they find new alternatives to reclaim or preserve authority and agency, both individual and collective. My work illustrates that gender is a focal point of these changes.

My first book, Gender, Separatist Politics and Embodied Nationalism in Cameroon is forthcoming with University of Michigan Press in 2019. Using oral interviews and archival records, such as Cameroon’s first cooking book and women’s advice columns, the book examines issues related to cookery, gossiping, sagacious female politicians, “sluggish” women who fail to attend the meetings of women’s organizations, and unruly housewives known as “women extremists,” to illuminate how issues of ideal womanhood shaped the Anglophone Cameroonian nationalist movement in the first decade of independence.  I use the concept of embodied nationalism to illustrate how political elites and formally educated urbanites implied that women’s everyday patterns of behavior and comportment—the clothes that women wore, the foods they cooked, their abstention from gossip, and their adherence to appropriate marital behavior in public spaces—might make a suitable Anglophone Cameroonian persona physically conspicuous on the local, national, and international stage. By drawing upon history, political science, gender studies, and feminist epistemologies, the book demonstrates how preserving conservative ideal Anglophone womanhood, cultural values, and political identity came to be seen as the lynchpin of Anglophone unity in English-speaking towns in Cameroon during the 1960s and early 1970s. I am currently finalizing research on my second book on the history of the Bahá’í Faith and masculine identities in English-Speaking Cameroon from the 1950s to the 1980s.

My hobbies include long-distance running (my favorite runs were on Mount Cameroon and in Hawaii, the big island), traveling, photography, painting, and writing poetry and short stories.

Website with Additional Information on Research, Publishing, and Awards