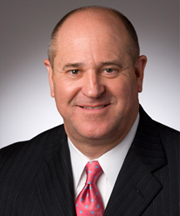 Mark came to Tenneco Automotive in April, 1998 from Tenneco Inc. in Greenwich, Connecticut, where as Vice President, Corporate Development he was responsible for executing Tenneco’s strategic transaction agenda. He initially joined Tenneco in Houston, Texas in January 1995 as Vice President, Financial Analysis and Planning and added the title and responsibilities of Corporate Controller in March of that same year.

Before joining Tenneco, Mark spent 14 years with Arthur Andersen, and served as an audit and business advisory partner of the firm’s worldwide partnership from 1991 through 1994.

He received his bachelor of business administration from Baylor University in 1980. Mark is a certified public accountant in Texas, and is a member of the AICPA, the Texas Society of CPA’s, Financial Executives International and the Institute of Management Accountants.