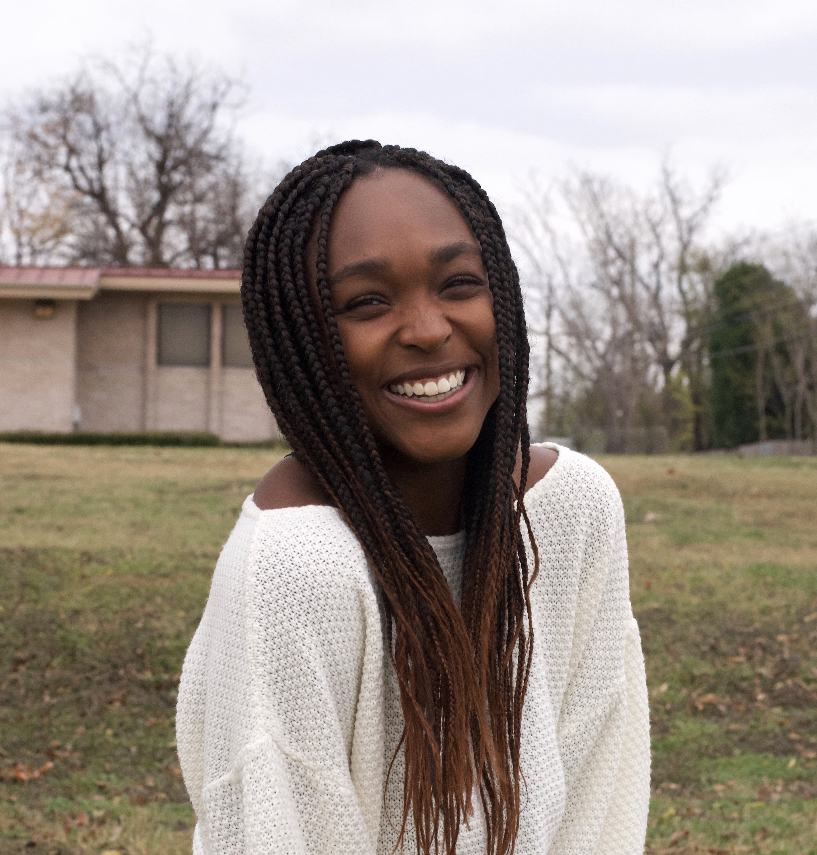 MSW Outstanding Student Award winner Samantha Nelms never imagined herself to be so involved in the field of social work.

Growing up, with her mother as a member of the city council in her hometown of Birmingham, Alabama, Samantha had been raised to appreciate and prioritize policy and politics. Because of her passion for the two, she decided to major in sociology, a field where she could study social organization, structure and the reasons behind it.

Because of her expertise in the field after conducting her senior capstone on community partnership and education, Samantha remembers her friends that were already in the MSW program at the GSSW encouraging her to apply.

“[At the time] I thought social work was just therapy, which was nothing what I wanted to do,” she admitted.

But, after speaking to her friends about the program, and about what they were learning in their classes and studying out in the field, she discovered the macro-side of the field that she had never considered.

“I had no idea of the doors social work could open for me, especially with the emphasis on neighborhood engagement and community partnerships,” she said. “This field is honestly perfect for me.”

Because of her knowledge and zeal for working within and for communities, Samantha was able to land an internship in community development working alongside former MSW GSSW alums such as Elise Jones, MSW ‘18, at Grassroots Waco.


Samantha has shown strength in her vulnerability as this semester has present many unforeseeable events, including the death of her friend, peer, and co-intern Alicia. Her ability to be honest with herself and with people around her has aided her in her growth and development through loss and she continues to succeed in her education, her role in BLMSW, her services to the community.

Grassroots is a Waco-centered nonprofit is committed to “cultivating healthy neighborhoods through leadership development training classes, free financial literacy and homebuyer education, and counseling to prepare families to become homeowners,” as well as promoting literacy and partnering with local Waco schools.

Samantha said her days consisted of popping into neighborhood association meetings, sitting in on and contributing in grant meetings, and reflecting inward toward the Grassroots organization in order to make improvements.

While she thoroughly enjoyed the diversity of her internship role, Samantha said she certainly faced some obstacles while at Grassroots, but they made her all the better as a social worker.

In one instance, Samantha recalls a time from the fall semester, shortly after she had just began her time with Grassroots. Many members of the North Waco community were upset that a liquor store was being built in this specific part of Waco, because of surrounding nursing homes and nearby recovery homes.

“I was a new face and so trying to gain their trust and their understanding in those moments were really difficult because they were really upset about all of the predatory businesses that had been popping up in their areas,” she said.

Samantha said through this experience, she was also able to delve deep into her passion for policy-- liquor laws, on the local, state and national level had to be investigated, as well as contacting and working with city council members and representatives.

Because of the deep connection she developed with community members and leaders through her projects and work at Grassroots, Samantha said she didn’t think her time in Waco would be quite over after her internship.

“I feel as my work and my time in Waco is not done. I just have that feeling that God is like, ‘You’re going to be here for a little while.’ I’m not done helping Waco, being in Waco, helping the Waco community empower themselves.”’

One colleague said in their nomination, “Samantha has shown strength in her vulnerability as this semester has present many unforeseeable events, including the death of her friend, peer, and co-intern Alicia. Her ability to be honest with herself and with people around her has aided her in her growth and development through loss and she continues to succeed in her education, her role in BLMSW, her services to the community.”

It is our honor to recognize your hard work, Samantha! Congratulations! #sicemsocialwork
Explore More
Featured Crystal Brown Alumni Profile: Shining Her Light For Others Oct. 5, 2021 Military veteran and Baylor alumna Crystal Brown is shining her Baylor light via social work in a way she never expected—in the field of nephrology. Growing up, Brown recalls seeing her cousin dressed professionally each day as an attorney. She always knew as a kid that she too wanted to be a professional one day so she would be able to establish her own voice. MSW Meet Raashida Birmingham: 2021 MSW Clinical Intern of the Year Jun. 29, 2021 Congratulations to Raashida Birmingham, the Garland School of Social Work’s 2021 MSW Clinical Intern of the Year. Like many others, Raashida did not first choose social work. However, after an internship with Healthy Families Florida, a program that “improves childhood outcomes and increases family self-sufficiency by empowering parents through education and community support,” Raashida said her supervisor at Healthy Families suggested the profession of social work to her. “I am thankful for this suggestion because social work is definitely my calling. I love working with and serving others and am very passionate about having the opportunity to do that every day as a career,” Raashida said. BSW Meet Nataly Sanchez: 2021 BSW Intern of the Year Jun. 23, 2021 “Nataly represents so much of what we are talking about nationally in terms of health care workers on the front lines during COVID-19. She is an academically excellent student. Nataly managed the many challenges of COVID-19 in her placement with dedication, perseverance and excellent client care this year,” said a colleague of the 2021 BSW Intern of the Year: Nataly Sanchez. Nataly said she chose social work because of her strong passion for community building as well as her goal to fighting human trafficking. MSW Meet Dondra Williams: MSW Community Practice Intern of the Year Jun. 9, 2021 “Dondra’s personal values align with service, integrity, and dignity, and she upholds these values while maintaining a sense of worth on the survivor. She appreciates and meets people where they are in terms of being diverse with different cultural and social values,” said Amanda Carpenter, task supervisor of Dondra Williams, the GSSW’s MSW Community Practice Intern of the Year. Dondra began classes at the Garland School of Social Work’s online program in May of 2019. She said Baylor felt like the right place for her to pursue her master's degree because of the prioritization of the ethical integration of faith and practice, especially because of the influence her faith has had on her life choices to become a social worker. Research Professor awarded $3.1M NIH grant exploring interventions with young women in the juvenile justice system Jun. 7, 2021 WACO, Texas (May 25, 2021) – Danielle Parrish, Ph.D., professor in the Diana R. Garland School of Social Work at Baylor University, has been awarded a $3.1 million grant by the National Institutes of Health to study the efficacy of risk reduction intervention efforts for young women age 14-17 in the juvenile justice system. The grant will be dispersed over five years, beginning May 2021. The project, titled CHOICES-TEEN: Efficacy of a Bundled Risk Reduction Intervention for Juvenile Justice Females, is an effort to fill gaps in care for at-risk young women in the juvenile justice system. "I'm really excited and honored to have this opportunity to pursue this research that I’ve had on my heart for many, many years," Parrish said. "This grant will provide the resources to implement a randomized controlled trial to test the efficacy of an intervention that I hope will be able to be used more widely in the U.S. and fill the gaps in services for this population."
Are you looking for more Stories?
All StoriesArchives