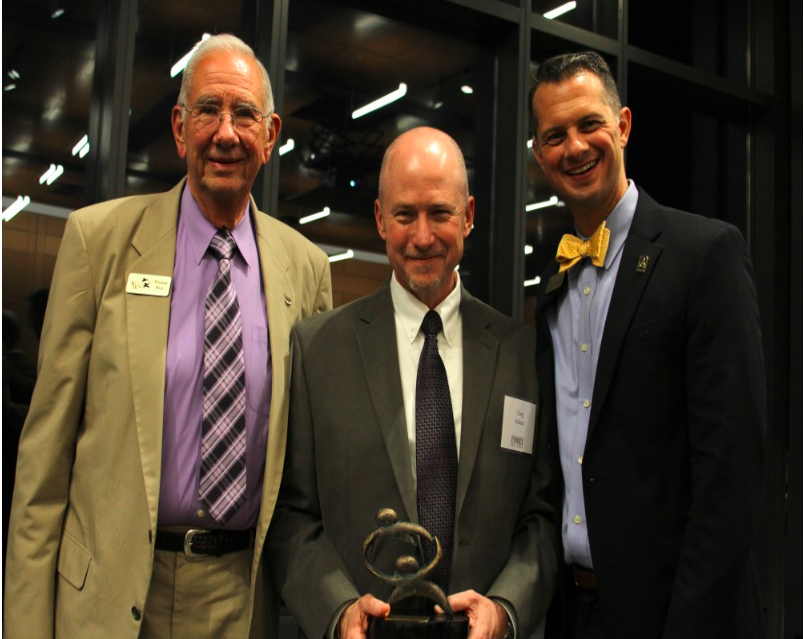 Greg Adam's story began in small town Missouri, outside St. Louis, the second of four boys. Greg came to Baylor as an undecided major thinking he would do church-related work. During his sophomore year, he was advised to take a career-decision workshop which revealed he should find a career which would “make a difference.”

With that thought in mind, Greg set up a meeting with Dr. Preston Dyer to learn about social work, and he realized the more he learned, the more he thought it just fit. Greg ended up double-majoring in social work and religion, graduated in 1985, went on to earn his MSW from the University of Missouri-Columbia, and has been “making a difference” ever since.

"I like to have meaningful things to do and to have movement, always moving toward a goal or something new," Greg said. "I am often drawn to topics which are challenging to discuss ... death and dying, politics, race relations, LGBTQ issues, and their intersections with spirituality."

Greg currently lives in Little Rock, Arkansas, and serves as the program coordinator for Good Mourning, a grief support and outreach program at Arkansas Children’s Hospital. His position allows him to create space for those who are grieving, those facing serious illness, and those impacted by suicide, serving clients of all ages: children, teens, and adults. For Greg, issues of grief and loss are a crossroads for both social work and religion and spirituality, places where people are challenged to find meaning and a way to live in health. Not only does he serve in this sacred space for patients and clients, but he also provides bereavement support to staff at the hospital.

"Because of both personal and professional experiences, there is a special place in me for those impacted by suicide," Greg added. "I also feel drawn to the needs of those historically marginalized due to their race, gender, religion, sexual orientation, or gender identity for the same reasons I am drawn to grief and loss."

For Greg, he believes these issues challenge meaning and ways to speak. He often finds, as with grief and loss, that the more he opens up to clients, the more experiences and opportunities for learning come.

"As a person of privilege in our culture—white, male, straight, cisgender, Christian—I feel a responsibility to work toward a world with less of a burden of privilege for some, burden for others," Greg said. "On the LGBTQ front, I feel especially for children who struggle for acceptance from family members and for families who struggle to respond in loving ways. I have seen this struggle in my own family and that has deepened my pull to these issues. The higher risk of suicide in this population overlaps with my work and experiences with grief, loss, and suicide prevention."

Greg is married to Syd Gibson, his wife of 30 years, also a Baylor grad, and they have two grown children, Noah and Lora. They all share a passion for service to others. Lora has a special interest in the needs of immigrants in Latin America and is working on her master's degree in public administration. Syd trains teachers all over the state on how to improve education for special needs students. Noah is currently attending Hendrix College with plans to attend grad school majoring in political science and music.

Anne Frank once said that in spite of everything, she believed people were basically good. Greg believes the same.

"In my experience, almost all people want to love and be loved, want to feel secure, want to feel like they matter and want to feel proud of their lives," Greg said. "There are many ways these good wants are warped and corrupted, but in general, people keep striving, over and over. This fits my spiritual perspectives, too ... part of being created and being created in the image of the divine. I believe that in the end, love, God, life gets the last say. 'Love bats last' is how Anne Lamont says it, and I agree. I truly believe in putting values into action because good intentions are not enough."

By Nikki Wilmoth
Explore More
Featured Meet Briana Fowler, 2022 Alicia Martinez MSW Spirit of Social Work Awardee Jun. 23, 2022 Briana Fowler is a first-generation college student from Austin, Texas, who, in her words, is a work in progress just trying to be a better version of herself every day…so much so that she has a tattoo that says it. And she is the 2022 Alicia Martinez MSW Spirit of Social Work Award winner. The Spirit of Social Work award is intended for students who embody the spirit of social work through engagement in and beyond the classroom, and who demonstrate a commitment to the values of the profession, and last year it was renamed to honor MSW student Alicia Martinez who lost her battle with COVID-19. Alicia was such a shining example of the spirit of social work both in and out of the classroom, and it only seemed fitting to honor her legacy in the profession through this award and judging by the words of one of Briana Fowler’s recommenders, Briana could not have been a better choice for of this award. Featured Q&A with MSW Community Practice Intern of the Year: Geneece Goertzen Jun. 13, 2022 Meet Geneece Goertzen, the 2022 MSW Community Practice Intern of the Year. Geneece is a May 2022 graduate who hopes to work with domestic violence survivors, to work with clergy and congregations around the topic of domestic abuse, and to one day go back to school and get her PhD. Her internship sites included Calvary Baptist Church and the GSSW's Center for Church and Community Impact. #sicem, Geneece! Featured Meet MSW Outstanding Student Trinity Martinez May 12, 2022 Pope Francis once said, “Go and show love to everyone, because your life is a precious mission: it is not a burden to be borne, but a gift to offer.” And when you meet our 2022 MSW Outstanding Student Trinity Martinez, you know no other mantra could better describe her. Trinity is an advanced standing student from San Antonio, Texas, but has lived all over the US and has traveled the world through mission work and study abroad programs, including countries such as Lithuania, Jamaica, Italy and Ireland. All of these experiences contributed to her ability to adapt well to change and exposed her to many cultures and diversity at a formative age. Today, she is a natural leader, committed to speaking up for others and standing up for what she believes. Featured Meet BSW Outstanding Student Micaela Jones May 9, 2022 From a family of educators arises Micaela Jones—emerging social worker. This graduating senior originally thought she would continue the “Jones legacy” as a teacher until she began student teaching and realized that many times, the “home prevented students from being able to thrive in the classroom.” Couple that with a heart for justice, and it became clear that social work was the correct path for Micaela to pursue so that she could impact change at a larger systemic level. It was this passion that earned Micaela the title of BSW Outstanding Student of the year! Research Healthy Bonds for Black Fathers-in-law, Sons-in-law Feb. 9, 2022 What does a healthy relationship look like for a Black son-in-law and his father-in-law? A study aims to answer that question and was published in “Psychology of Men & Masculinities” by University of Maryland School of Social Work’s (UMSSW) Assistant Professor Ericka M. Lewis, PhD, MSW, with Professor Michael E. Woolley, PhD, MSW, and Baylor University Assistant Professor Brianna P. Lemmons, PhD, MSW. Studies on in-laws are far and few between, less so for male in-law relationships, and even less so for Black male in-laws.
Are you looking for more Stories?
All StoriesArchives