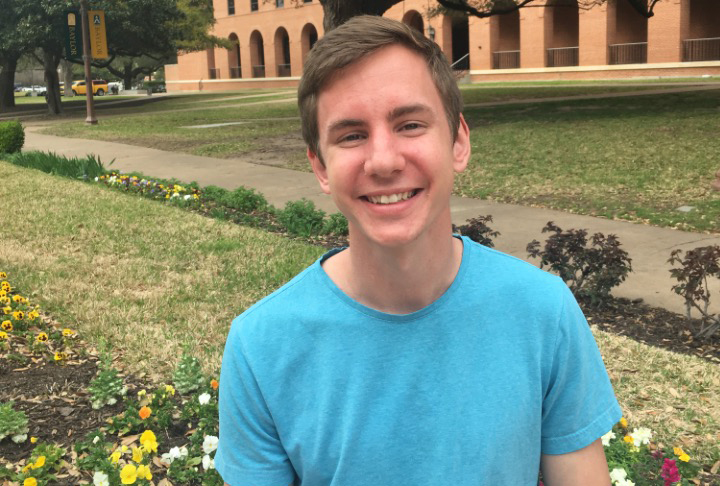 Often, being a transfer student at a new university can be a culture shock and come with its share of difficulties adjusting; however, for senior BSW student Jeremiah Moen, his background as a transfer student has helped him continue to dive into his passions and grow as a future social worker.

Jeremiah started his college education at San Jacinto College in southeast Houston. He was taking general courses at the time and had not decided on a specific career path. After a year and a half, Jeremiah’s father suggested that he take a semester to decide what he wanted to major in. He told Jeremiah to take a class in each of the major subjects he was interested in to help decide. Jeremiah took courses in elementary education, engineering, calculus, and a counseling class.

“The only one they had open was called Ethics in Mental Health and Substance Abuse Counseling, so I took it. Five minutes in, [I was sold]. I dropped all my other classes and pursued that program,” Jeremiah said.

After deciding on social work, he talked with many other social workers to learn outside of the classroom and pursued internships to gain hands-on learning experience. He worked with Odyssey House Texas, an adolescent drug rehabilitation center, and The Best Group, an outpatient methadone clinic.

Jeremiah came to Baylor in 2015 and loved the community and classes at the Garland School of Social Work (GSSW), and Baylor as a whole. He cited his internship experiences as tremendously helpful in his transition to the GSSW. He was able to better understand social work theories and concepts by applying them to examples from his practical experience. The GSSW faculty also played a big part in his growth as a student.

“Every faculty member I have had has taught me very well. They all have convictions,” Jeremiah said. “They are not just doing this as a job––it’s what they love to do. I love that they all do work on the side, too. They’re doing research; they’re [immersed] in what they are teaching.”

With roots back to the first counseling course he took at San Jacinto College, Jeremiah is still very much interested in counseling, but has since been drawn to marriage counseling, specifically.

“I believe family is the cornerstone of society. I also see a lot of pain and hurt when it comes to family relationships,” Jeremiah said. “I want to help those going through difficult moments in their lives. I hope to bring a fresh perspective and new energy to the research and development of better programs that can help restore broken marriages.”

Overall, Jeremiah has loved his time at the GSSW and has felt this is where God called him to be. He has felt more and more that social work is the career he has always wanted.

With Jeremiah being a few years older than many of his classmates and having past social work internship experience, I asked if he had any advice for students at the GSSW.

Jeremiah said, “The best advice I can give would be to trust God and lean into what scares you the most, because its most often the place where we are the most uncertain that God can use us the most.”

Jeremiah currently works directly with Waco’s homeless population as an intern at Mission Waco’s Myer Center Community Clinic. Jeremiah is finishing his BSW requirements and will graduate with his MSW in 2019 as part of Baylor’s five-year MSW program.