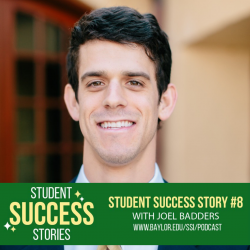 Major: Biology with a minor in Business Administration

Have you every wondered what it takes to pursue rigorous course of study while also seeking out meaningful relationships?  Are you looking for some concrete examples of disciplined study methods to help you excel in your coursework?  Listen to Joel Badders as he shares his strategies for success.  From his morning routine to the time he overslept for a test, he share things he's learned along the way to guide him on a path to success.

•          Understand your notes better with the textbook

Mistake you’ve learned from since being at Baylor:

•          Write down all tests when professor gives out syllabus

Center for Academic Success and Engagement