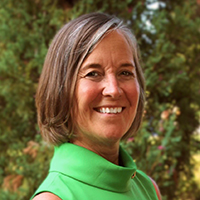 Amy serves the student population from Liberal Arts (Arts and Sciences), Music, Education and Human Sciences in the Robbins College. She enjoys helping students to decide which direction they want to take after graduation, and assists with their job searches. In addition to engaging students and parents, Amy likes to involve people in the career search process from every side.

With 10 years of recruiting experience under her belt as Director of Recruiting and Employee Retention,  Amy understands the value of networking.  Her first job out of school was as a flight attendant, during which time she met two entrepreneurs who hired her as a marketing director for their company.  That opened up more opportunities within the company during her 15-year tenure.  Other jobs she has had include: financial advisor, business owner, project director for non-profit supporting education, and consultant. Amy earned her Bachelor of Arts in English from the University of Southern Mississippi and her MBA from Baylor University.

Amy was born and raised in the Southeast.   She spent most of her adult life in Alabama and on the beaches of North Florida. She is a mom of three and enjoys listening to great music, searching for the world’s best cheeseburgers, reading, and laughing entirely too loud with her husband and friends.

Make an appointment with Amy