The appointment also expands the role of advancement at HSB 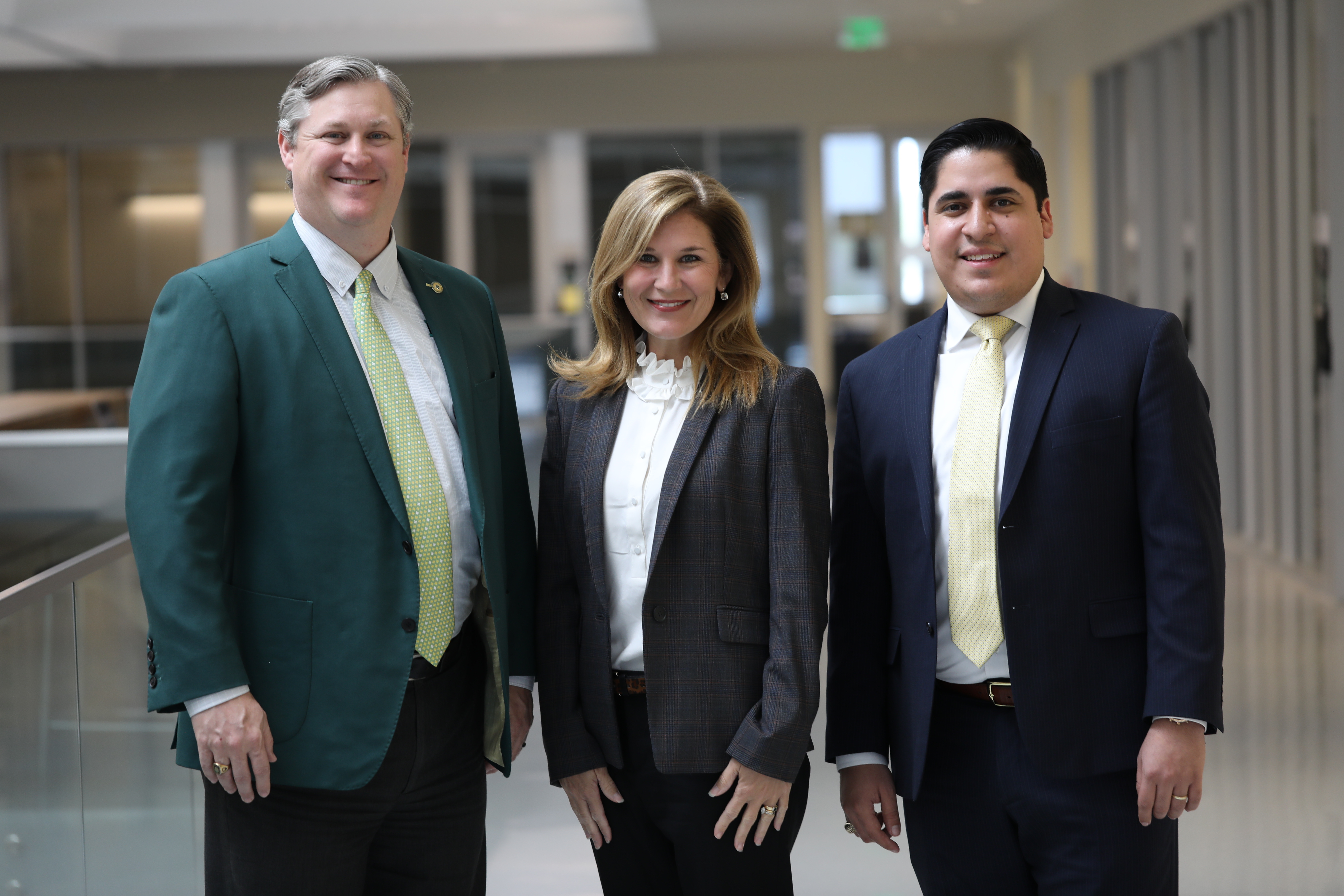 Trey Hagins, Jamie Youens, and Adam Contreras in the home of the Hankamer School of Business at the Paul L. Foster Campus for Business & Innovation. (Photo by University Photography/Robbie Rogers)

The Hankamer School of Business has always sought to connect alumni with their interests and passions in advancing the School's mission. One key factor in making those connections is the team of Development professionals who form these relationships.

In early 2021, that team saw new leadership and additional growth as Charles B. "Trey" Hagins III was appointed Managing Director of Development for the Business School. After more than seven years at Hankamer School of Business, Trey will now lead a team of fundraisers as they work with alumni, parents, business leaders and community partners in building robust resources that will advance the School's growth priorities as outlined in Illuminate, the University’s strategic plan.

"Trey has been a tremendous asset for our development efforts at the Hankamer School of Business, and I look forward to watching the Development team advance Hankamer with the new Dean, Dr. Sandeep Mazumder. It is obvious how much Trey loves Baylor and the Hankamer School of Business and he is ready and well positioned to take on this leadership opportunity," said Terry S. Maness, dean of the Business School.

Hagins and his team will work closely with the incoming William E. Crenshaw Endowed Dean Sandeep Mazumder, Ph.D., as he joins the School in July.

Hankamer's Development team will expand to three, as Jamie Youens, Director of Development, and Adam Contreras, Assistant Director of Development, recently joined to partner with donors and identify meaningful opportunities that align with their giving intentions. They will strive to provide thoughtful stewardship of donor relationships and charitable investments that directly impact the lives of Hankamer students who will be equipped as future principled business leaders.

The team also will work with Hankamer alumni, parents, corporations and foundations to provide engagement opportunities with the School through speaking in classes, with internship and job opportunities and with other ways the School already engages with the Baylor Family.

"Hankamer alumni are a gifted, diverse and high-achieving group of business leaders that give generously to support the Baylor students following in their footsteps," Hagins said. "Jamie, Adam, and I are thrilled to work alongside Dean Mazumder as we share opportunities and initiatives to advance the Christian mission in business education and continue elevating Hankamer's profile."

In 2018, Baylor announced the public phase of the Give Light Campaign, the $1.1 billion comprehensive campaign which undergirds Illuminate and impacts every aspect of campus life: academics, athletics, student life and service. The goal of Illuminate is to spur Baylor forward to become America's preeminent Christian research university.

Hagins, Youens and Contreras will work with the School's alumni, parents and friends to expand student scholarships and build programmatic endowment. They will also work to create endowment support in priority areas of growth, such as faculty and programmatic support for Business Analytics and the School's Ethics and Leadership programs.

Hagins, BBA '00 and MBA '07, has previously served as a Director of Development for Baylor’s west coast region, the Division of Student Life and University Libraries. Before coming to Baylor in 2009, Hagins worked at Dell Technologies in Round Rock. He is married to his high school sweetheart, Liz Cox Hagins, BSE '00, who serves as an English teacher and department chair at Midway Middle School. They live in McGregor, Texas, and have two children. He can be contacted at Trey_Hagins@baylor.edu.

Jamie Youens, BS '98, came to Baylor in 2012, serving for five years in Baylor's Office of Institutional Events. In 2017, Youens joined the Office of Advancement as an Assistant Director of Development, with a focus on regional development. She and her husband, Jason have three children. Jason is a shareholder and executive vice president at Insurors of Texas, based in Waco. Jamie can be contacted at Jamie_Youens@baylor.edu.

Adam Contreras, BA '17, joins the team from his role within the Baylor Career Center. Prior to joining Baylor in 2019, he worked in medical sales for Tiger Neuroscience. Adam met his wife, Arianna, during their freshman year at Baylor, and they are parents to two daughters. Arianna works as a speech therapist for Midway Independent School District. Adam can be reached at Adam_Contreras@baylor.edu.