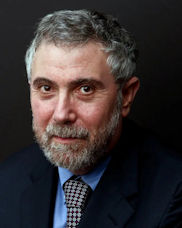 Paul Krugman is a Distinguished Scholar at the Graduate Center of the City University of New York and at its Stone Center on Socio-Economic Inequality. He is a professor emeritus of Princeton University and also had previous appointments at MIT, Yale and Stanford.

In 2008, he was the sole recipient of the Nobel Memorial Prize in Economic Sciences, awarded “for his analysis of trade patterns and location of economic activity,” and particularly for the influence of economies of scale in international trade theory. He also received the John Bates Clark Medal from the American Economic Association and the Asturias Award given by King of Spain.

Krugman is the author or editor of more than 25 books and over 200 published professional articles, and is well-known to the general public as an op-ed columnist and blogger for The New York Times. His most recent book, published in 2020, is Arguing with Zombies: Economics, Politics, and the Fight for a Better Future.