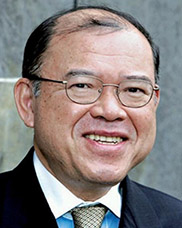 Born in Bangkok on 30 May 1946, Dr. Supachai attended school there at St. Gabriel´s College and Triam Udom School. Dr. Supachai received his Master´s Degree in Econometrics, Development Planning and his Ph.D. in Economic Planning and Development at the Netherlands School of Economics (now known as Erasmus University) in Rotterdam. In 1973, Dr. Supachai completed his doctoral dissertation on Human Resource Planning and Development under the supervision of Prof. Jan Tinbergen, the first Nobel laureate in economics. Dr. Supachai began his professional career at the Bank of Thailand in 1974, working in the Research Department, the International Finance Division and the Financial Institutions Supervision Department. In 1986, Dr. Supachai was elected a member of the Thai Parliament and was appointed Deputy Minister of Finance. In 1988, he was appointed Director and Advisor, and subsequently President, of the Thai Military Bank. In 1992, Dr. Supachai was appointed Senator, and that same year he became Deputy Prime Minister entrusted with oversight of the country's economic and trade policy making. In this role, he was actively involved in international trade policy and represented Thailand at the signing ceremony in Marrakech of the Uruguay Round Agreement in 1994. He was also active in shaping regional agreements, including Asia Pacific Economic Cooperation (APEC), the Association of Southeast Asian Nations (ASEAN) and the Asia Europe Meeting (ASEM). In 2001, he was appointed Visiting Professor of the International Institute for Management Development in Lausanne. He has published a number of books, including Globalization and Trade in the New Millennium (2001) and China and WTO: Changing China, Changing World Trade (2002, co-authored with Mark Clifford). In September 1999, he was elected Director General of the World Trade Organization (WTO), taking office on 1 September 2002. He became the Secretary General of UNCTAD in September 2005.