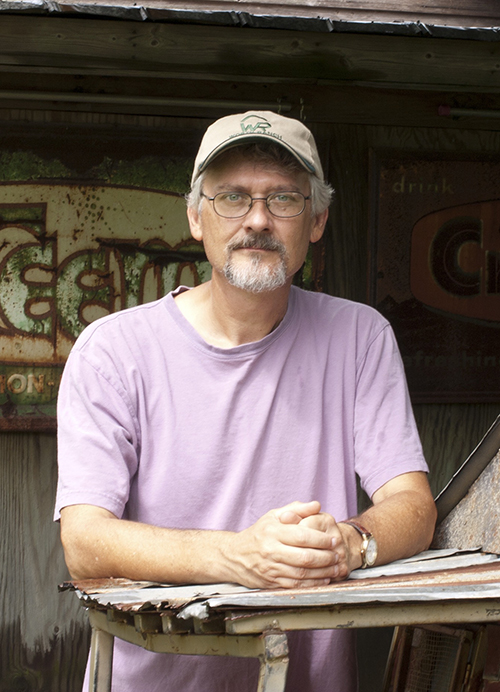 Robbie Barber was born in Williamston, North Carolina, and raised on a farm near the Roanoke River. Although Robbie has lived in Texas the last twelve years, he maintains a strong connection with his roots and visits North Carolina every summer to conduct research. He joined the Baylor Art Department faculty in 2000.

As a result of my travels throughout North Carolina and rural America, I have become fascinated with the strong visual character of this country's vernacular architecture. For me, vintage lap-board houses, mobile homes, tobacco barns and other agrarian-related structures have become regional icons and tell the stories of the people who have either built or inhabited them. This implied history interests me deeply.

The sculpture "Settlin' In" is based on a barn in Martin county, North Carolina, not far from where I spent my childhood. As long as I can remember, this structure has been melting into the landscape, leaning and twisting more each year. In 2001 that barn lost the battle and was torn down. It makes me feel good to know it hung on tenaciously and had to be brought down by outside forces.

Typically treated as eyesores on the landscape, structures such as "Settlin' In" often reflect the social and economic plight of a large segment of our society. Yet on a formal level, they have a hidden beauty I am drawn to, abundant with complex relationships of color, texture, and shape. Much like the Ash-Can School of American painters in the early 20th century, I am interested in the depiction of unheralded everyday subject matter. Like these artists, I believe there exists a subtle nobility in these castles of the mundane.

Other influences on my work include science fiction, toy design, folk and outsider art, and found objects in general. I fuse these influences to create hybrid objects of fantasy, the results of which are often humorous, ironic or visually poetic in nature. The sculpture "Supersonic V (Silver Streak)" depicts a mobile home that is transformed into a spacecraft of dubious reliability. On one level it reminds us of the dangers of space travel, and on another it speaks to the irony that most mobile homes never go anywhere.

For all the associated humor and irony depicted in my sculpture, there is a feeling of sadness that is prevalent in these works, as if they have a story to tell. They remind me of the stories my Aunt Mildred has told me of her early life experiences in rural North Carolina. I can usually get her to a certain point, then she holds back, clearly troubled by some memory. It brings to mind the cliche, "if these walls could speak."