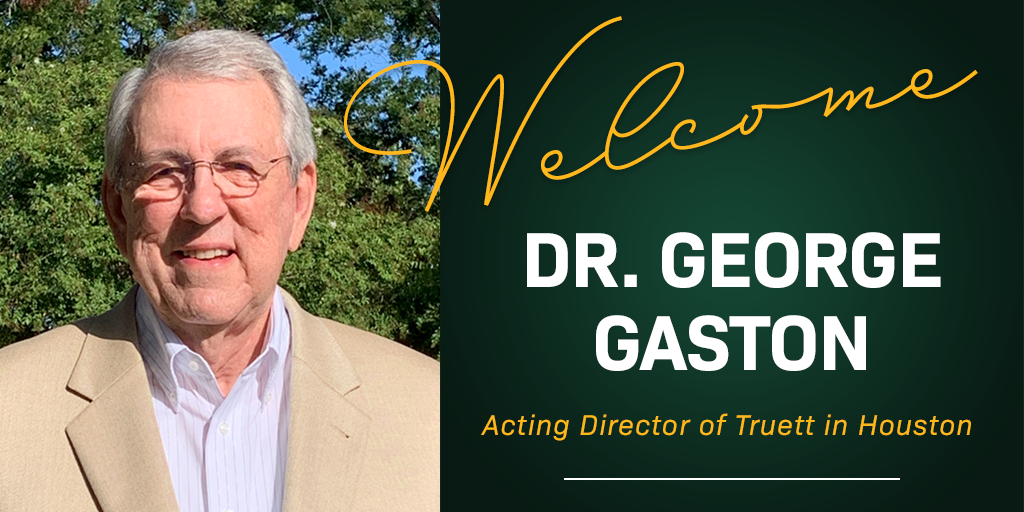 Dean Todd D. Still of Baylor University’s George W. Truett Theological Seminary has announced the appointment of George Gaston, PhD, as Acting Director of Truett in Houston. Gaston will begin to serve immediately in this strategic role. As the leader of Truett’s additional instructional site in Houston, Gaston is charged with the oversight of the campus, which includes recruiting, supporting, and resourcing students, networking and building relationships with local ministers and other community leaders, and serving as a bridge between Houston and the Seminary’s flagship Waco campus. Truett in Houston, which is beginning its fifth year, offers classes leading to the MTS, MACM, and MDiv in two locations—Tallowood Baptist Church and the Lanier Theological Library.

Regarding Gaston’s selection, Steve Wells, Pastor of South Main Baptist Church in Houston, and a three-time Baylor graduate (BA, 1990; MDiv, 1997; DMin, 2003), remarked, “George Gaston is an inspired choice to direct the Houston extension of Baylor’s Truett Seminary. He is a wise and respected pastor, a gifted pastoral counselor, and an experienced and respected leader. His wide relational networks and deep love for Christ and the Church will be a great gift to Truett and her students. I join the chorus of those who celebrate his willingness to undertake this important task.”

Early in his career, Gaston was an Assistant Professor of Pastoral Ministry at Southwestern Baptist Theological Seminary and most recently served as Professor of Pastoral Ministry and Coordinator of the DMin program for Logsdon Seminary’s San Antonio Campus. Additionally, Gaston has served on the Board of Trustees for Memorial-Hermann Healthcare System, Houston Baptist University, Hendrick Medical Center, and Hardin-Simmons University. He and his wife, Susan, live in Richmond, TX on the western edge of Houston and have two adult children and six grandchildren.

Burt Burleson, Baylor’s University Chaplain and Dean of Spiritual Life, said the following regarding Gaston: “Over the stretch of his ministry, George has been a pastoral leader who cares deeply for persons and the institutions that impact them. Those whom he has mentored and taught and cared for, including myself, are manifestations of the healing and formative role that he has played in our lives. Churches and schools and hospitals have also been blessed by his steady, wise, and faithful stewardship. George is a great addition to and will be a delightful presence at Truett in Houston.”

“Although I was not looking for a position,” Gaston commented, “after visiting with Dean Todd Still and others about Truett in Houston, and praying about the possibility, I began to sense a calling to embrace this important challenge. I’m honored and thankful to have this opportunity to help Baylor’s George W. Truett Theological Seminary build an even stronger presence in our great city of Houston. The churches and ministers of southeast Texas are indeed blessed to have such a valuable resource close to home. Joining my life experience, along with my love for training ministers of the Gospel, with Dean Still and the excellence of Truett Seminary is an exciting prospect for me. I’m confident that we can serve a diverse and growing number of God-called persons who want and need theological education.”