Baylor>George W. Truett Seminary>About>News>Spring 2022 Convocation Address: "What Time Is It?"

Spring 2022 Convocation Address: "What Time Is It?" 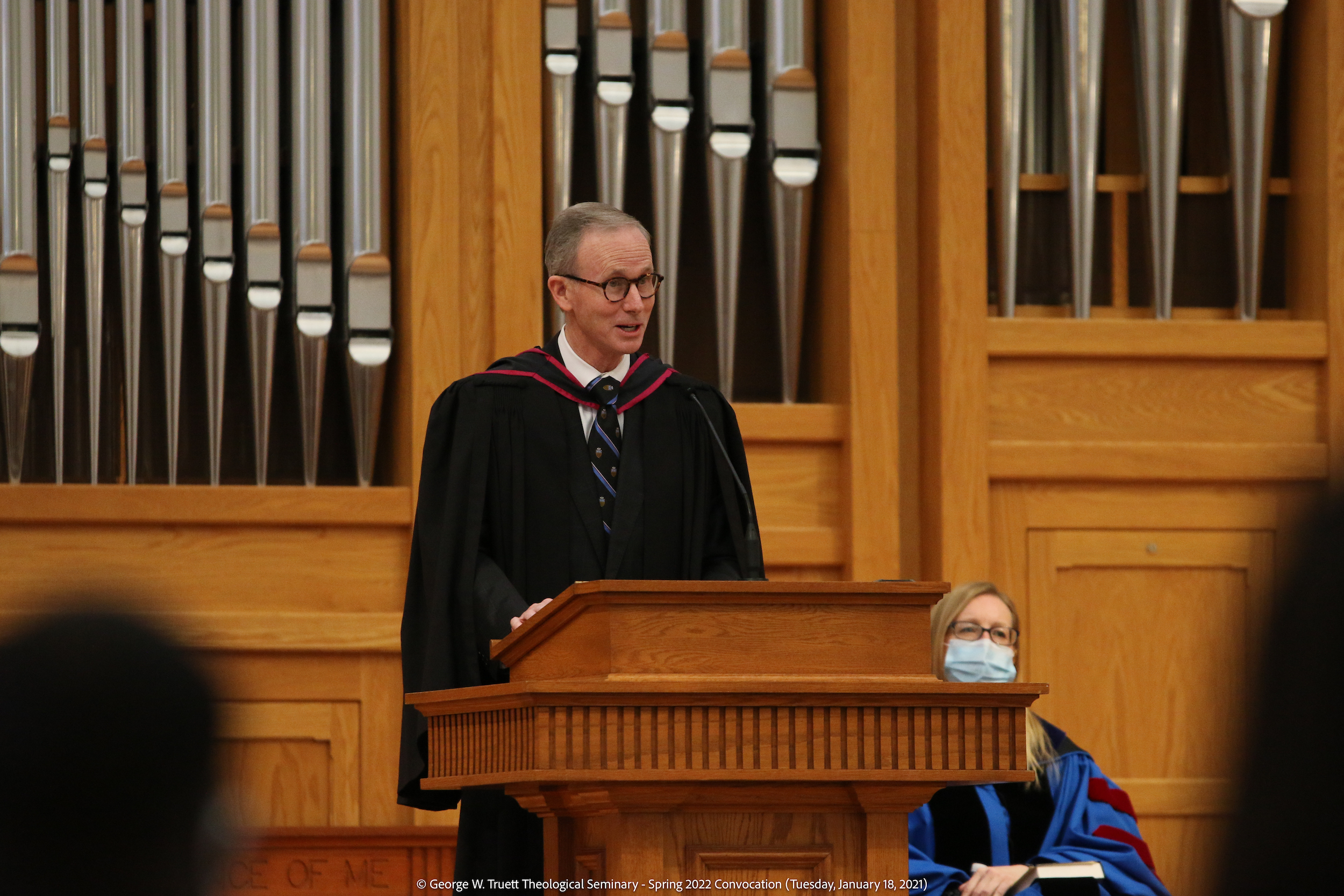 Before the advent of mobile phones, it was not unusual if you did not wear a watch or if your watch's battery died an untimely death to ask another person, even a total stranger, the question, "What time is it?" Or, "Do you happen to have the time?"

Were we to think of time chronologically, we know precisely what time it is. It is January 18th, the day after the Martin Luther King, Jr. National Holiday in the United States and the start of the Spring 2022 semester at Baylor's Truett Seminary. Furthermore, we are gathered in the Paul W. Powell Chapel for Convocation at Truett's Baugh-Reynolds campus in Waco, TX during the 11 o'clock AM hour (Central time) to mark the beginning of another academic term. Even as we begin the spring semester, we gather together in this sacred space, which turns twenty this year, as a community of faith and learning, as faculty, staff, students, and friends to begin and to begin again with worship, prayer, and fellowship. We know what time it is, at least with respect to Baylor's academic calendar and where we are as a Truett Seminary community with respect to the same.

What if we were to think of time more generally and contextually? What time would it be then? On a global, national, and local level, we continue, of course, to struggle and to grapple with a pandemic that we know as COVID-19, which is caused by a coronavirus known as SARS-CoV-2. We are also now well acquainted with the virus's variants known as Delta and Omicron, the latter of which continues to rage and to rear its ugly head both near and far.

No one has been untouched by this virulent virus. Among other things, this infectious, contagious, and dangerous disease has reminded us of how true and timely these lines once composed by Church of England cleric John Donne are:

No man [we would say person] is an island of itself; every man is a piece of the continent, a part of the main....[A]ny man’s death diminishes me, because I am involved in mankind, therefore never send to know for whom the [death] bell [of the church] tolls; it tolls for thee.

Interestingly and instructively, Donne concludes his now famous "Meditation XVII" by stating that God is our only security.

Short of death, among the many deleterious effects of COVID is isolation, especially among the elderly. This sad and stark reality is readily and particularly seen in hospitals and in places of long-term care.

Arguably and apparently, such mind-numbing and soul-destroying isolation has been accentuated and exacerbated by the polarization sweeping and gripping our nation. Instead of talking to one another, people are increasingly inclined to and often encouraged to talk about one another and past one another. Commonality is all too often replaced and eclipsed by political loyalties and intractable ideologies.

Adding insult to injury, racism continues to mark and mar our country and far too many of its institutions and organizations. The sad and sickening case of George Floyd is perhaps the most well-known one, but it is in no way and by no means an isolated incident. We need to look to and to lean into more fully the vision articulated and demonstrated by Martin Luther King, Jr.

Furthermore, one can readily and repeatedly observe in our nation the erosion of any number of Judeo-Christian perspectives and practices which are ours and were once more widely held and commonly upheld in our country.

Amid isolation, polarization, racism, and secularization in a context of COVID, one can understandably feel discouraged and even despairing. We, for our part, however, do well not to succumb to the counsel of despair. As C.S. Lewis reminds, "To grieve without hope is to forget that there is a God." What if instead of throwing up our hands or throwing in the towel, we were to see the present moment as a missional moment to offer winsome witness and sacrificial service to a world in need?

Were we to pose another, not unrelated question, "What time is it at Truett?" and not look to the clock tower, which is perpetually and annoyingly some eight minutes slow anyway, what might be the answer at this particular point in time in the life of our beloved school, which is still relatively young, having been established but 30 years ago? Time constraints preclude an expansive, much less an exhaustive, answer, but short of saying nothing we can say something even if we cannot possibly say everything.

First of all, we, like all other theological schools, are in a time of transition. For us, however, such churn and change are not attributable to educative challenges and opportunities alone. At Truett, a significant number of faculty and staff, who have served our school long and well, have recently retired or have announced their retirements. These committed and gifted colleagues, mentors, and friends include, in alphabetical order: Jan Cason, Ron Cook, Robert Creech, David Garland, Hulitt Gloer, Lai Ling Ngan, Roger Olson, Steve Reid, Dorothy Terry, and Terry York. These ten individuals have given so much to so many associated with our seminary and university, and four of them (Drs. Creech, Garland, Reid, and York) continue to do so until now. We are in demonstrably and greatly in their debt. Although such towering pillars and mature trees cannot simply be replaced, standing on their shoulders and looking to them as examples, we are able to see how to pivot and persevere in the vital work that we do here together.

Through the contributions of many gifted and committed people, our seminary, which values innovation, is also in a time of expansion. Allow me to note in no particular order a number of initiatives and developments that have taken place among us in recent days:

Additionally, as a so-called "embedded school," we also are gladdened and heartened by the recent announcement that Baylor University has been named by the Carnegie Classification of Institutions of Higher Education as a Research 1 university, meaning that Baylor joins the nation’s leading research institutions as a doctoral university with very high research activity.

This is also a time of celebration in the life of our seminary. In addition to increasing enrollment numbers and encouraging development figures, we have been able to drive down the cost of attending Truett. Day by day, then, we are seeking to make a high quality Truett theological education as accessible and as affordable as possible. Ours is a "long obedience in the same direction."

All the while, we are seeking to double down on and to reinforce that which makes Truett distinct, if not different, namely, rigorous academic instruction coupled with intentional spiritual formation in the context of a caring Christian community of faith and learning marked by intellectual curiosity and biblical fidelity.

We pursue this valuable vision and indispensable mission based upon and informed by our conviction that we are living in the fullness of time between the times. This decidedly theological angle of vision frames, informs, invigorates, and animates all that we seek to be and to do at George W. Truett Theological Seminary.

It is because Jesus came proclaiming "The time has come. The kingdom of God has come near. Repent and believe the good news!" that we live and move and have our being. It is because in the "fulness of time God sent forth his Son, born of a woman, born under the law, to redeem those under the law" that we declare our times are in God's hands.

As we commence the spring semester of 2022, living between the already and the not yet, we do well to ponder the question that the LORD put to Moses in Exodus 4:2: "What do you hold in your hand?" And even as we begin to answer this question individually and collectively, may we recall our own calls that brought us here and bless us here as students, faculty, and staff. A call to study and to serve, to seek and to find, to pray and to praise, to know and to be known, to give and receive.

May we also in this glad hour at the start of a new semester consecrate and dedicate ourselves afresh to Christ and to Scripture, to our classes and to our churches, to our families and to our friends, to this community and to increasing conformity to the image and likeness of Jesus. For it is always and ever timely for Christ-followers, not least Christian ministers, to exalt Christ by embracing and exuding his character and practicing his presence. We do well not only to count our day along with our blessings, but also to make our days count and to be a blessing.

So, may the fruit of the Spirit—love, joy, peace, patience, kindness, goodness, faithfulness, gentleness, and self-control, against which there is no law—be ours in abundance this semester and beyond. And may we not grow weary in doing good to one another and to all people, for in due time we will reap if we do lose heart. Amen.