Commitment to Scripture and to Home Guides Truett Student's Journey 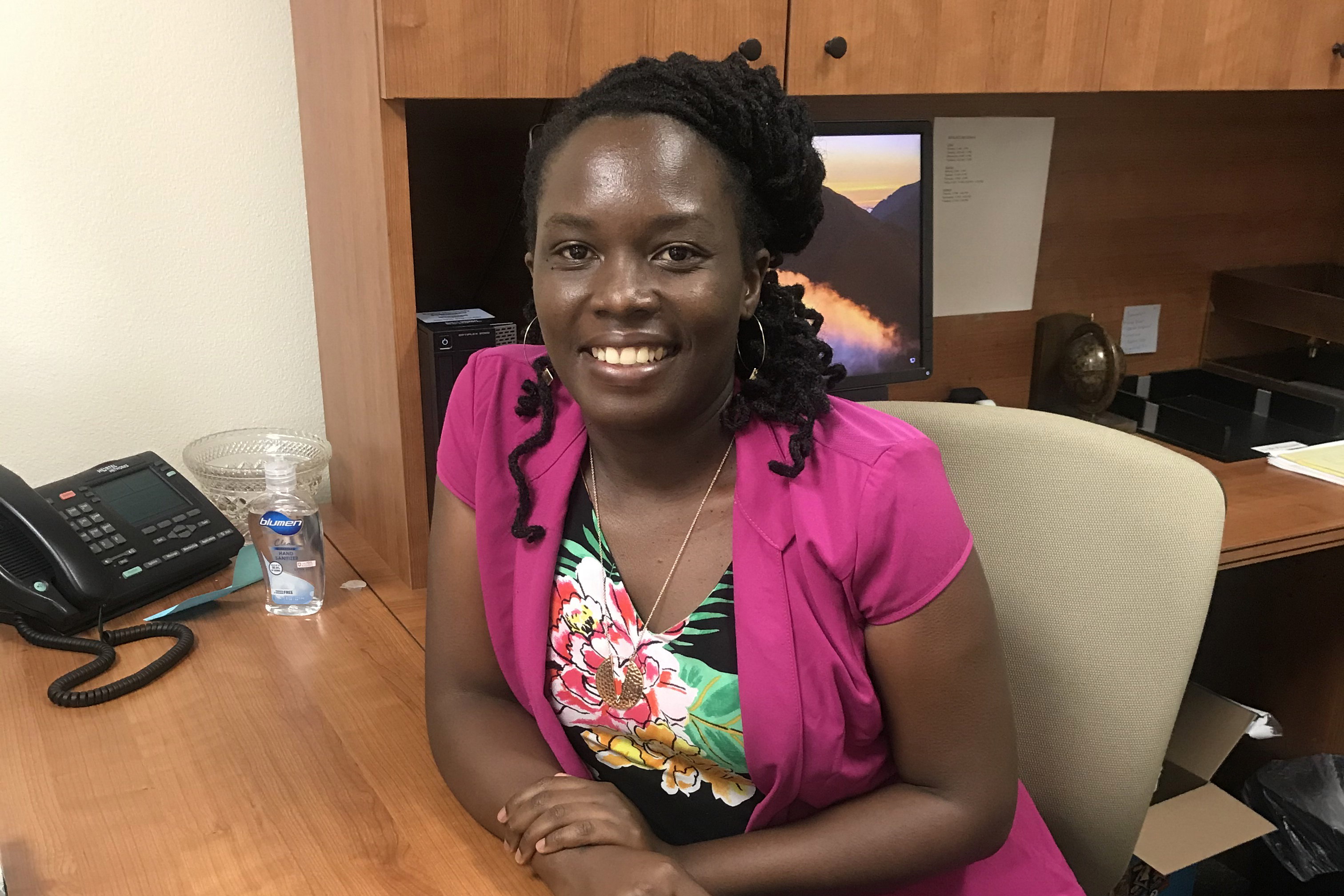 When Solange Balikunde asked her father why he had given her the name “Balikunde,” his answer prophesied the future of her calling and ministry. He told Solange that the name meant “may the people be passionate about reading the Bible” and that he had given her the name because he saw a lack of love for Scripture in his community. It was her father’s prayer that Solange would be both committed to reading Scripture and to inspiring others to do the same.

Today, Solange is two semesters away from graduating from Baylor University’s Truett Seminary with her Master of Divinity degree.

Her journey to seminary began at her home church in Rwanda. After committing her life to Christ, she began to ponder some big questions—Why am I in this church? Why am I in this country? What is my purpose? As she asked herself these questions, she began to become more aware of needs in her church, particularly the need for support of new believers.

“I began praying to God to send someone who would be with them for guidance,” Solange said. “I prayed for this for probably two years. At some point, I realized that I might be that person. It had always been on my heart.”

Despite doubts about her own ability to lead such an initiative, Solange spoke with her senior pastor and her father, who was on the pastoral team, about her idea and received their support. Soon, she had started a Bible study for people who were new to the church or recently baptized. Using skills she had learned from studying interpretation and translation in college, she also began translating Bible materials from English and French into Kinyarwanda, her local language.

“That’s when I realized my calling to ministry,” Solange shared. “I wanted to minister to people who are trying to figure out what they believe and those who just converted to Christianity. I wanted to offer resources, help them read the Bible, and help them take those first steps.”

After doing this work for about four years, Solange began to feel that she needed to be further equipped for ministry. She also felt a desire to travel outside of her country for school. It was around the time that she began praying for these opportunities that Solange began working with a Christian nonprofit in Rwanda called Transformational Leadership in Africa (TLAfrica), which seeks “to empower African leaders through effective teaching and mentoring by equipping them with knowledge and skills for Christ-like leadership.”

Not long after beginning her work with TLAfrica, the organization’s CEO approached Solange about attending Truett Seminary in the United States and helped her secure scholarships to provide for her studies. She soon connected with Dayspring Baptist Church in Waco, a church partner of TLAfrica, and church members and Truett faculty Dr. Robert Creech and Dr. Jenny Howell. A few months later, she was on a plane heading to Texas.

Throughout her time pursuing her degree at Truett, Solange has returned each year to Rwanda to work with TLAfrica.

“I love being here at Truett and all of the education and formation, but I also know that I need to stay connected to my community back in Rwanda because that’s where I will be serving,” she said.

Solange was also able to connect her work with TLAfrica with her mentoring requirements for her degree program. In May 2020, she traveled back to Rwanda for her mentorship, in the midst of the beginnings of the COVID-19 pandemic.

“I didn’t get to do everything I wanted to do because churches were closed,” she explained. “But I did get to interact with pastors in very meaningful ways. I wanted to learn how COVID was affecting pastors in Rwanda. I wanted to talk to pastors and hear how they are experiencing and dealing with it.”

After completing her interviews with pastors in Rwanda, a devastating truth emerged—people were leaving the church. Churches were closing. During the small amount of time that churches were able to be open, the seats were empty. Stories abounded of people turning from their faith. In Rwanda, technology resources are limited for both churches and their members, so the emergence of a digital church—like has been seen in the U.S.—is not a viable option.

“Every pastor I talked with shared that they had realized how important it is to preach sound doctrine and fill people with the gospel and the word of God in a way that they will be sustained, even when they can’t meet in person,” Solange said. “I’ve never heard a pastor confessing those things before.”

From her interviews, Solange also learned that the tragedy of COVID-19’s impact on Rwandan churches was not limited to its members. As churches were forced to close their doors and members had left or lost their own jobs, pastors were struggling financially.

“Most pastors in Rwanda do side jobs to supplement the small financial support they get from their congregations. When COVID hit, pastors lost their side jobs or could not find them anymore. Many pastors have found themselves in a situation without any income, which has made it difficult to feed their families,” Solange shared. “Some of the pastors I talked to were having emotional breakdowns. They were feeling helpless, especially not being able to connect with their congregants.”

Following her research, Solange submitted her report to both her professor of record for her mentorship and TLAfrica. She returned to the U.S. to continue her degree program at Truett, but the stories she had heard did not leave her heart.

When the second wave of COVID-19 hit Rwanda, and churches were once again forced to close their doors, the situation became worse. Those who were dying were primarily those who did not have food to eat. Solange learned from her parents of the plight of Shadrack Ndenzayo, a pastor she had connected with in Rwanda. His wife, their four children, and Shadrack would go for two days without eating, just drinking water to survive.

Their story was just one of many Solange began to hear. These stories weighed heavily on her heart, and she began to pray, “God, what can I do?”

She was struck by an idea. She may not have the means to help these pastors on her own, but she was part of a community who could. Solange developed a goal to raise $5,000, an amount that would feed at least 150 families for a week. She connected with TLAfrica to see if the organization could help facilitate donations and ensure that the dollars raised turned into food relief for struggling Rwandan pastors and their families.

“Another reason why this is important is because these pastors will feel encouraged to see that they have someone overseas thinking about them, praying for them, and supporting them financially,” Solange said. “These pastors, through it all, keep serving, keep reaching out to their congregants, keep trying to be faithful to their calling. It’s a source of encouragement when they receive support from somebody they’ve never seen. It’s a sign that God is thinking about them.”

After sharing her story and her invitation to support the Rwandan pastors with Dayspring, her church in Waco, Solange raised over $4,000 in one week.

“I am grateful to Dayspring for giving me the opportunity to share about the way COVID-19 has affected pastors in Rwanda,” Solange said. “They listened with compassion, prayed, and gave financially. I was amazed by the response. In less than two weeks, Dayspring gave $4,030.74. God works in marvelous ways. I felt encouraged and my faith has grown.”

With this early success, Solange has now increased her fundraising goal, hoping to feed even more families for as long as she can, even as the pandemic continues to wreak havoc across the globe. She is encouraged though by the support she has received, and sees it as a reflection of the lessons she has learned as a student at Truett Seminary.

As Solange continues to see her community at Truett and at her church rally around her initiative to feed Rwandan pastors, she takes these lessons on support and cooperation to heart, knowing they will be crucial upon her permanent return to Rwanda and to her work at TLAfrica.

“One of my hopes is that I will be able to work with pastors in TLAfrica’s pastoral training program. This will mean encouraging pastors to form small groups and connecting them with resources,” she said. “In Rwanda, it’s part of the culture to go to church on Sunday, but it’s not so much part of the culture to meet in small groups and read the Bible. In my Scriptures classes, the professors would mention over and over again that the Bible was meant to be read in a community. That’s something that I’ve always thought is important. So, I’m very excited about this opportunity.”

If you would like to learn more about Solange’s efforts to raise funds for pastors in Rwanda impacted by the COVID-19 pandemic, please email Solange_Balikunde1@baylor.edu.