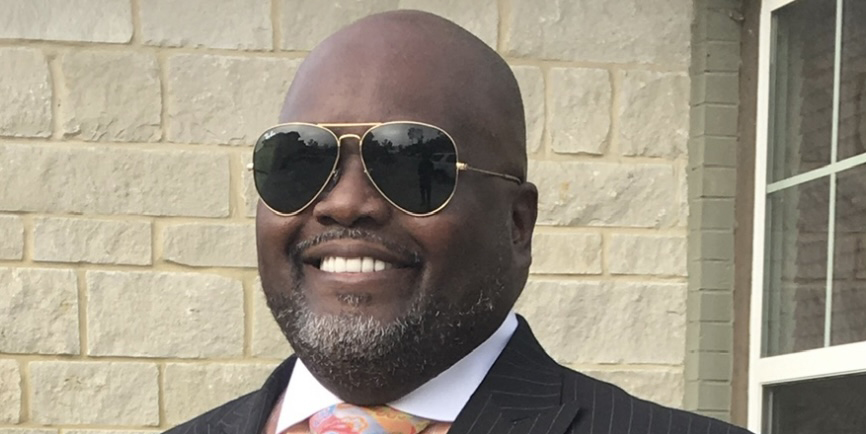 Tell us a little about yourself.

Currently, I am the pastor of New Pleasant Green Missionary Baptist Church, which is located in the Fifth Ward here in Houston. I have been pastor there for 12 years. I’m the author of a book titled, Get Back Into The Game: Winning Despite The Traumas, Trials, and Troubles of Life. I have two children, a daughter, Kayla, and a son, Jaymin.

What brought you to Truett Seminary in Houston?

In 2017, I was working at Star of Hope Mission. I had been there close to 15 years. I was off one Monday and went to a ministers’ meeting, and the guest presenter that day was Dr. Joel Gregory. He spoke about Baylor’s Truett Seminary establishing an extension here in Houston and that classes were starting that night. He urged us to come out that night and see what was going on, and if we felt that this was something God was calling us to do, we could enroll. And that was when it started.

Tell us more about this first class that helped convince you to enroll.

The class was Preaching 1 with Dr. Joel Gregory and Dr. Ralph West. That was one of the most enriching semesters I’ve ever spent in my life. It was awesome.

It went over the basics of preaching, sermon construction, how to gather and utilize illustrations. They talked about how to properly exegete a text. They talked about content and context, the hermeneutical process. It was very enriching. Now, when I open the Scriptures, even if it’s just for my personal reading, I see the text with the original author’s intent. It has opened up another world of how the Bible came together and how the texts are composed. It has really blessed my life tremendously.

What are some of the other ways that your time in seminary has been impactful?

Besides the classes, I think the most exciting thing to me is the community. It’s the people that I’ve met. The fellowships and relationships that have bonded together. We know each other’s children’s names, spouses names, intimate details about our lives. None of us knew each other prior to Truett. We were just strangers sitting in a classroom. Now, I can’t tell you where my life would be without them.

The relationships have been the biggest surprise and the most fulfilling part of this experience. It’s the relationships with my fellow students and the seminary staff. We’ve had fellow students who were on the verge of dropping out because of a family emergency or any number of things, and the rest of us would step in and ask, “How can we help you through this crisis?” The encouragement, the study groups—they’ve helped people stay in the program. That’s happened to me! These are lifelong friendships.

What are your next steps after graduation?

I have been looking at possibly doing a PhD or DMin. I’ve been looking at several schools, but of course, Baylor is number one. I also have some things at the church that definitely need my attention since I’ve been laser-focused on my schoolwork. But my hope and my ambition is to go on and get a PhD or Doctorate in Ministry.

What would you say to a student who is considering attending Truett in Houston?

I am probably the biggest unpaid staff member of the recruiting department of Truett Seminary! To all of my friends, whenever we have ministers’ meetings, if I get half a chance to talk about Truett Seminary then I jump on it. Some of my friends will lament that they need to get back in school. Some of them will say, “I haven’t found a seminary in Houston that’s suitable for me. Most of the seminaries I know are out of state or out of town.” That’s my opportunity! I’m always encouraging them.

It’s not only the furtherance of education. It’s actually being drawn closer to Christ because of the extensive study of Scripture. I’ve discovered things about God that I’ve never known in my life just through the methods of study. But again, my biggest encouragement is the community. I have a friend who just enrolled, and he absolutely loves it.

Dr. Ralph West said something to me many years ago. He said, “Derrick, never despise learning. Don’t ever think you’ve arrived at the point where you think you don’t need learning and don’t need to advance your mind anymore. Never get to that point.” That has stuck with me, and that’s what I try to share. If you have a chance to push forward in your education, I think this is a perfect opportunity and a great school in order to do that.