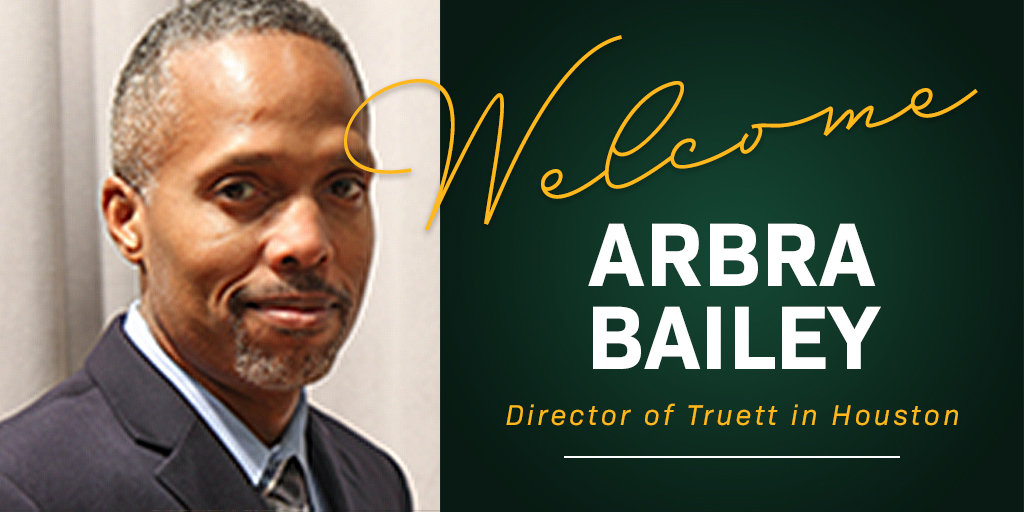 “Following a protracted and thoroughgoing search, I believe that we have found in Arbra L. Bailey just the right person to direct Truett in Houston,” said Todd D. Still, Ph.D., the Charles J. and Eleanor McLerran DeLancey Dean and William M. Hinson Professor of Christian Scriptures at Baylor’s Truett Seminary. “With his gifts and graces, education and experience, achievements and connections, Arbra is well-placed to expand upon and extend the good work that John K. Burk, Assistant Dean for Strategic Initiatives at Truett, helped to launch. An already bright future for our Houston campus just became brighter with the hiring of Arbra Bailey.”

Bailey currently serves as the National Director of African American Relations with Compassion International in Colorado Springs. In this role, he directs engagement, marketing, and fundraising activities for the African American Relations branch of the organization. During his time with Compassion, Bailey has engaged with over 1,500 African American churches in five years and launched a number of innovative digital connection strategies, particularly during the pandemic. Previously, he served as President and Senior Consultant of Opulent Consulting and as Director of Ministry for The Church Without Walls in Houston. Bailey is a native Houstonian and is looking forward to “coming home.”

A 2012 graduate of Truett Seminary, Bailey was an active member of the Truett community during his time as a student. He served on the Student Recruitment Team, as a Covenant Group Leader, and as President of the Truett Black Student Association. He also received the Robert Jackson Robinson Preaching Award and was named the Dr. A.J. “Chip” Conyers Outstanding Male Student of his graduating class. Bailey is presently enrolled in Truett’s Doctor of Ministry program.

“We are delighted to welcome Arbra Bailey, our new leader of the Houston campus of Truett Seminary,” said Duane Brooks, Ph.D., Pastor of Tallowood Baptist Church, which currently hosts the Houston campus, and member of the search committee. “Arbra brings great energy and boundless enthusiasm to continue and build on the excellent work of John Burk. The future is as bright as the promises of God!”

“It is with undiluted joy and highest hope that I commend the selection of Rev. Arbra L. Bailey as Director of Truett in Houston. Arbra brings to this stewardship a notable portfolio of Christian and vocational experiences that have equipped him with an uncommon set of skills for the challenge of leading Truett in Houston,” said Ralph D. West, Sr., D.Min., Founder and Senior Pastor of The Church Without Walls. “First, he is a committed disciple of the Lord Jesus Christ, the necessity for any such position. Beyond that, his wisdom, creativity, perseverance, and relational skills will fortify him for the challenge of bringing ministerial education to the nation’s third largest city. I predict that his winsome witness, engaging personality, and thoughtful planning will open a wide door not only for ministers in training, but for those not yet called to the ministry.”

As Director of Truett in Houston, Bailey will be responsible for, among other things, networking with local ministers and community leaders, recruiting students for the Houston campus in consultation with the Truett Recruitment Coordinator, supporting and resourcing current Houston students, fundraising to undergird extension efforts, and working with Truett Academic Services on the scheduling of classes.

“I am overjoyed and humbled for the opportunity to steward my passions for the Church and the Academy in my new role at Baylor University’s Truett Seminary,” Bailey said. “I look forward to the expansion of the Truett in Houston family as we live life together in purposeful Spirit-led community.”

Bailey and his wife, Helena, have three children, along with two grandchildren, and have been members of The Church Without Walls for over 20 years. Bailey enjoys listening to jazz, watching sports, and Friday night movie nights with the family. He has a passion for Christ, His Church, humanity, the poor, and racial reconciliation.