Dr. Chris Johnson is the Senior Pastor of First Baptist Church of San Antonio where he leads a pastoral staff of ten ministers along with 31 support staff. Prior to serving in this position, he was Pastor of Chalk Bluff Baptist Church in Waco, Texas. Johnson earned a Bachelor of Arts in Religion from Baylor University (2004) then went on to complete a Master of Divinity (2009) and a Doctor of Ministry (2016) from Baylor University’s George W. Truett Theological Seminary. 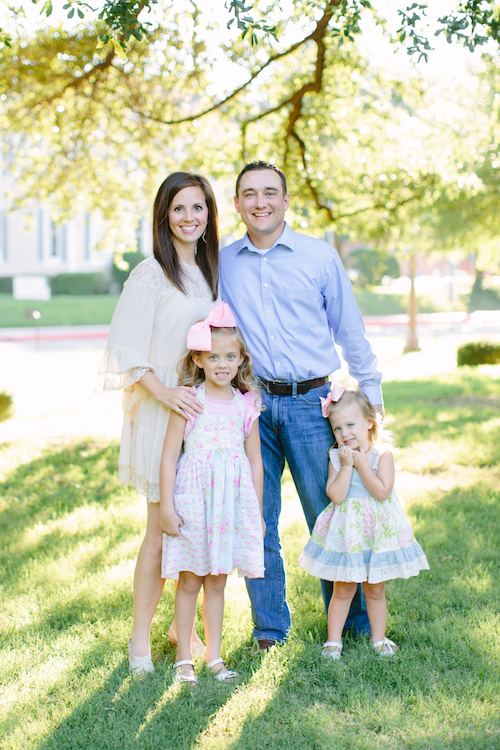 When Dr. Chris Johnson was growing up in Carrizo Springs, Texas, every pastor he knew had a Master of Divinity degree. Between his junior and senior year of high school, as he sensed a call to ministry himself, he knew he would eventually earn one, too.

Johnson began his higher education pursuits at Baylor University studying religion and participating in the Ministry Guidance program, which provided a connection to the Baptist General Convention of Texas, scholarship money, and specific classes related to ministry preparation. As he neared the end of his undergraduate education and began considering which seminary to attend, he had some specific criteria in mind.

Baylor’s Truett Seminary promised to be such a place. Many of Johnson’s friends from Baylor went across the country—or even world—for seminary, but Johnson and his wife Amy, whom he married in 2004 after graduation, felt compelled to stay in Waco.

While working on his Master of Divinity, Johnson served for five years as the youth minister at First Baptist Church in Covington, Texas, about an hour north of Waco, and then as interim pastor at the church for one year. This work in the church was the complement he needed for his theological education. It allowed him to practice the skills he was studying in his classes and to learn to balance life as a minister.

In 2009, Johnson completed his Master of Divinity at Truett and began serving as Pastor of Chalk Bluff Baptist Church. In addition to pastoring, he stayed connected to the Seminary by leading Covenant Groups for current students. During this time, he began to delve deeper into spiritual formation practices, which he was learning from Dr. Angela Reed, Associate Professor of Practical Theology and Director of Spiritual Formation at Truett.

While Johnson always knew he would need a Master of Divinity, he had not always seen the same value in doctoral studies. Looking back, however, he is grateful to Dr. Ron Cook, former Director of Truett’s Doctor of Ministry Program, for encouraging him to pursue a final degree. He described the program as a “fantastic experience.” In the program Johnson truly learned to be a reader and to find the strength and discipline—with the help of the Holy Spirit—to work through volumes and volumes of helpful resources for the church, as well as to produce some of his own.

Preparing for the Hard Work of Ministry

Today, unlike the models Johnson encountered while growing up in the church, not all of those called to ministry prioritize theological education. As Johnson has counseled people who feel called to ministry, he has encountered some misconceptions. For some, the role of minister is idealized; for others, the job seems as simple as leading a weekly Bible study and preparing a sermon. In reality, vocational ministry is hard, complex work.

Now, having been a lead pastor for over a decade, Johnson is able to look back over his education and point to key elements of his study that prepared him to serve and lead.

In seminary, students expand their reading lists and are exposed to new voices. Through that process their convictions are fortified, and they learn to express themselves with intellectual integrity.

During his Master of Divinity studies, Johnson learned to consider theology in its historical context. He also amassed an arsenal of resources that he draws upon when his congregants have questions about topics like baptism and the Lord’s Supper, or when they want to discuss Calvinism versus Arminianism. 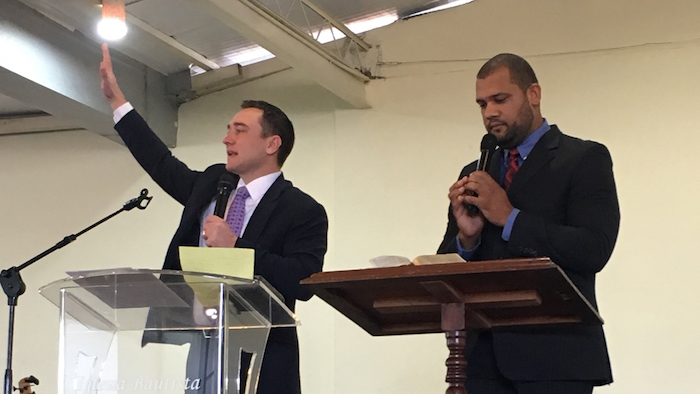 If a pastor has not already taken the time to think through and become well-grounded theologically in discussions like these, it is difficult to lead others.

Similarly, if a pastor is not rooted personally in spiritual practice, he or she may be unable to spiritually care for the congregation well.

During his years serving as a youth minister while pursuing his Master of Divinity, Johnson discovered ways to connect with God that he had not before encountered, even as a lifelong church member.

Professors at Truett Seminary, regardless of their academic focus, encourage the spiritual formation of their students. Most classes begin with a time of prayer, and faculty make themselves available to students outside of the classroom for guidance and to offer pastoral care. They also share their own journeys of formation.

Johnson cites an example of Truett preaching professor Dr. Joel Gregory introducing the M’Cheyne Bible Reading Plan, a guide to reading the whole Bible in a year, during one of his classes. Johnson incorporated this practice into his devotional life and has been amazed at the power and strength that comes from it.

In addition to guidance from professors, Johnson’s Covenant Group experience was another meaningful connection point—both to God and to his seminary colleagues. Through their weekly meetings, Johnson was exposed to practices like Lectio Divina, the Divine Hours, incorporating times of silence, and how to design and prioritize times of personal retreat. The relationships formed in Johnson’s Covenant Group were cemented through years of sharing their lives coupled with times of confession. They still stay in touch.

Johnson’s Master of Divinity experiences set the foundation for deep spiritual formation. His Doctor of Ministry studies gave him the time and space to build upon that foundation for the good of the church.

A Doctor of Ministry in Spiritual Formation

As a student in the Doctor of Ministry program, Johnson looked back over his ministry training and his time serving in churches—including his undergraduate days—and he observed that many of the leadership approaches he was taught were actually secular business models, with no sense of spirituality. During his time in seminary, and then after, while deepening his understanding of spiritual formation as he led Covenant Groups, he realized how significantly spiritual formation practices were impacting his own life. He wanted to be a part of teaching these things and practicing them better in the church.

The culminating Doctor of Ministry thesis project requires students to identify an opportunity for improvement in the church, and then to develop a plan or strategy to help strengthen that area. Based on his reflections, Johnson developed a project that he implemented with his congregation at Chalk Bluff Baptist Church. He guided three church committees tasked with making significant church decisions to infuse spiritual formation practices into their processes. For example, if a meeting was usually one hour of business—with a prayer at the beginning and end—Johnson instructed the leadership to use 30 minutes of that time for practices like silence, prayer, worship, confession, and Scripture reading. 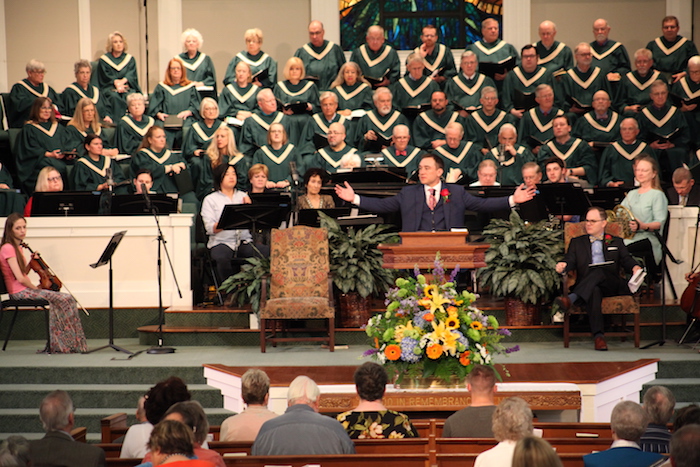 Today, as he ministers to his pastoral staff at First Baptist Church of San Antonio, Johnson emphasizes spiritual formation as the team’s top job priority. He encourages his staff to use office time for prayer and reading their Bible and to find avenues for practicing confession.

Johnson says personal spiritual formation is “the number one thing on your job description…because if that doesn’t happen, the rest of it doesn’t matter. And really, the rest of it is not going to have the bones and strength it needs if you haven’t been on your knees before the Lord. If you haven’t spent time in the Word, you’re not going to have the strength and energy to do this work you’ve been called to do because we’re not capable of it. We need the work of the Spirit in our lives.”

Building the Strength for Ministry

As Johnson ministered and studied, from the time he was a freshman at Baylor University until he walked the stage for the final time to receive his Doctor of Ministry from Truett Seminary, God developed a strength in him that has allowed him to withstand the pressures of life in ministry. Not only that, but God also equipped him to look with discerning eyes at the church, in order to build her up.

“Ministry really is hard work. It’s getting your hands dirty and it’s dealing with people, and there is a lot more to it than you realize,” Johnson said. “Seminary is that training ground. It’s the bootcamp that you need to really strengthen you and build you up for the hard work of ministry. You’re not going to get that on your own, and you’re not going to get that just serving in a church, either.”

“You’re not going to get those voices speaking into you that you need, and the outside encouragement that you need without that time in seminary.”