Emmanuel Roldan is the pastor of Primera Iglesia Bautista de Waco. He earned his Master of Divinity from Baylor University’s George W. Truett Theological Seminary in 2016 and is currently working on a Doctor of Ministry at Truett. 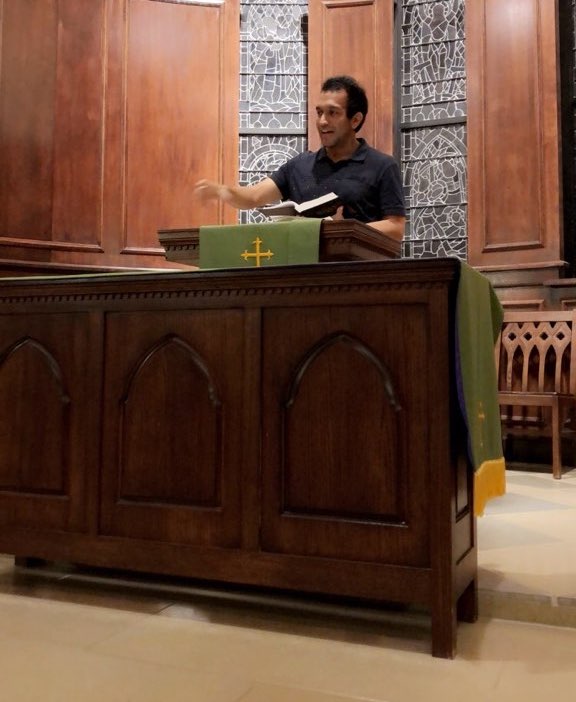 Pastor Emmanuel Roldan grew up in the church. At 13-years-old he attended a youth camp where he learned about full-time ministry and first sensed a call. He decided to pursue the call.

In response, Roldan’s church pastor invited him to preach. Roldan hesitated at first—he did not want the attention—but his family reminded him that he had not sought out the pulpit and to consider that perhaps this was a bigger call. After he preached that first sermon, doors began to open for Roldan to teach, lead worship, and preach. He took every opportunity that allowed him to serve in the church.

In college, Roldan served in the Baptist Student Ministry (BSM), and after he graduated, he accepted a position as a BSM intern. He expected to continue serving in parachurch ministry, or work with a missions agency, and was interested in what the gospel looks like in different settings, among diverse people.

During this time in his life, Roldan was enjoying his ministry work and had mentors and friends helping guide him, but in the back of his mind, he heard a whisper, “Anything worth pursuing is worth preparing for.”

Then one day, in the midst of this discernment, Roldan received an envelope full of cash and an anonymous note that read, “God has placed you on our hearts to support you in this ministry. Here’s $5,000. Use it as you see fit.” He took this gift as a sign and began exploring seminary options.

“I wanted to be around other people who were studying other things,” Roldan said, not siloed in a stand-alone seminary. He wanted to explore how theology, missions, and preaching related to other disciplines and take advantage of public lectures across the University.

He was also committed to serving in ministry while in seminary and was intrigued by the Resident Chaplaincy Program, in which select seminary students live in the residence halls on Baylor’s campus and provide spiritual support and care for the undergraduates who live there.

“So,” he said, “I came to Truett with only $5,000, somehow paid tuition that first semester, somehow paid rent, and somehow didn’t starve—which is just weird to think about now.”

Formation in the Classroom and Community

When he arrived at Truett in the fall of 2012, Roldan was pleasantly surprised to discover that there were people like him in a similar life stage, with thoughts, questions, ideas, and experiences like his. Walking alongside these new friends, seeing how they lived their lives of faith, and watching them grow spiritually, was encouraging.

The seminar style of Truett’s classes—in which students and professors engage in roundtable discussion—allowed him to hear from other people and articulate his own thoughts. Together, his classmates and he wrestled through hard questions and learned to faithfully respond to God in the midst of the pain and joys of life, something they would continue to do after seminary as they went out to serve in diverse ministry settings.

Roldan was struck by how willing the professors were to invest their time in conversation and guidance outside of the classroom.

“I tell people I came to Truett not knowing anybody, but I left with a ton of friends,” he said. “Among those were professors, and I’m honored to be able to call a lot of them friends.” 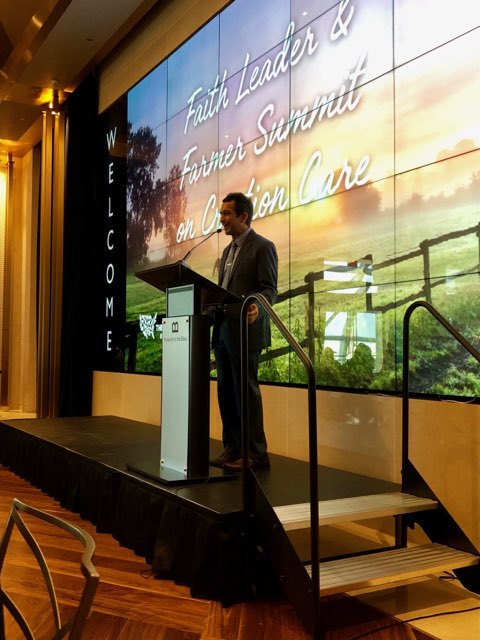 During his second year of seminary, Roldan became the resident chaplain of Brooks Residential Flats where he lived and served until he graduated. He was also a member of Harris Creek Baptist Church, where he led small groups, was a worship leader, and served as a greeter. Additionally, during two summers, he worked as a hospital chaplain at Baylor Scott & White Medical Center - Hillcrest.

In these roles Roldan was able to put into practice the ideas and skills he was learning in the classroom while also taking time to reflect and allow the practical theology in the residence hall, the local church, and the hospital to inform his schoolwork. Through this dynamic learning process, by Roldan’s third year, his heart began to open toward serving in the local church rather than in parachurch ministry or missions.

On a Wednesday night during his last semester of seminary, Roldan decided to visit Primera Iglesia Bautista de Waco. He went for three reasons: to hear Spanish, for the opportunity to learn the Bible from someone in the community, and to be around older people. A woman he met that night said they were looking for three things as they searched for their next pastor: bilingual, under 30-years-old, and theologically trained—all descriptors of Roldan, though he was not there to find a job. The woman told him he should apply.

Through his experience as a hospital chaplain in particular, Roldan had fallen in love with Waco and its people. He was connecting with the city in a way he had not been able to as he served at Baylor and Harris Creek. Around that time, he was also falling in love with Evie, a young woman he had met and begun dating at Baylor, whom he would later marry. Roldan knew he wanted to stay in Waco.

It was not long before Primera Waco invited him to be the church’s pastor, and Roldan accepted the position. He graduated from Truett in May 2016 and spent the summer as a hospital chaplain again before beginning to pastor Primera Waco in September 2016. 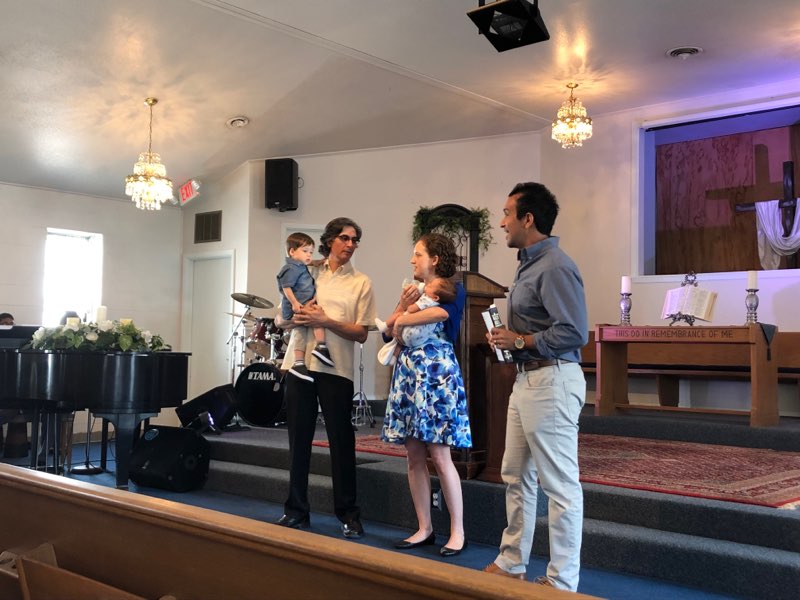 When Roldan arrived, the congregation was comprised mostly of native Wacoans, generations of families who had lived in the area and grown up in the church. The previous pastor had served the church for 53 years. Even so, Roldan received a warm welcome as the congregation immediately extended him their trust, and continue to do so today.

Services at Primera Waco are bilingual. Everyone participates together in a structured liturgy, and everything is printed in both languages. As Roldan preaches, he speaks a phrase in Spanish, then a phrase in English. He weaves back and forth to ensure that everyone in the congregation understands the message.

Over time, students and faculty from Baylor and Truett have started coming to the church. Many of the students Roldan prayed over as a resident chaplain, hoping they would connect with a local church, have found a place to belong at Primera Waco. He watches with awe as the divide between Baylor and the Waco community is shrinking.

“I never thought that I’d have a church that would be sort of leading that process,” he said. “It’s sort of crazy how that’s happening.”

A Map for Ministry

As Roldan reflects upon how Truett equipped him to serve Primera Waco, he turns to an analogy about entering a forest after studying a map. Through his studies and practice during seminary, God provided a map comprised not only of wisdom from books and professors, but also from friends and colleagues. This map includes new ways of connecting with God through spiritual formation practices and a vigor for learning and engaging theological reflection. This map prepared Roldan to step into the forest of pastoral ministry.

“The fact that you have these intellectuals who are leaders in their field and yet are willing to listen and be part of the discussion…That just made an impression on me,” Roldan said, thinking back on his classes and professors at Truett. “It influences the way I lead my church, the way I lead Bible studies, the way I speak to my church leaders. That was huge for my growth as a minister, and just as a person in general.”

Studying at Truett is not just about picking up ministry skills or thinking theologically. The faculty and curriculum are designed with formation in mind.

“It’s not just about learning how to parse a Greek verb, but it’s about the kind of person you’re becoming at the end of the day,” he said.

Taking the time to prepare for ministry—in study, spiritual formation, and practice—has helped Roldan avoid pitfalls as he pastors. It guides him in a path of wisdom. Pastoral ministry can sometimes be a lonely field in which to serve. Seminary connections can be a lifeline when facing tough decisions and situations.

In January 2019, Roldan decided to return to Truett to pursue a doctor of ministry degree. He missed the rigor of thinking theologically in community with professors and peers. He desired to pick the map back up and add to it as he continues along his path of serving in full-time pastoral ministry.

“Anything Worth Pursuing is Worth Preparing For”

When asked what he would tell someone who is called to ministry and is trying to decide whether seminary is worth the time and money, Roldan had this to say from his experience:

Yes, in-person theological education is a substantial commitment of time and money, but the fruit that comes from that investment, as Roldan attests by sharing his story, is invaluable to a minister’s ability to serve the people of God with wisdom and endurance.

“We’re let into people’s lives, the most vulnerable parts of their lives…the peaks and the valleys, and so I think that preparation—spiritual preparation, but also intellectual, academic preparation—is vital.”