A Calling to Serve

A Calling to Serve

Military service and family tragedy left Ruby Wayman with a nearly unbearable test to her faith. Her path to Truett was unconventional and challenging, but she is now focused on serving with compassion and open arms.

As a six-year-old girl running through the streets of El Paso with her siblings, Ruby Wayman knew God was calling her to serve him. The journey that call would take her on, however, was one she could never have expected.

Wayman grew up in a single-parent home and had a difficult relationship with her mother throughout her childhood. In 1985, a fight with her mother led Wayman to run away to join the military. Despite scholarship offers to run cross-country and the opportunity to be the first member of her family to go to college, the 18-year old took a different path.

As her airplane cruised towards Fort Jackson, South Carolina, all Wayman could think to herself was, What have I just done? 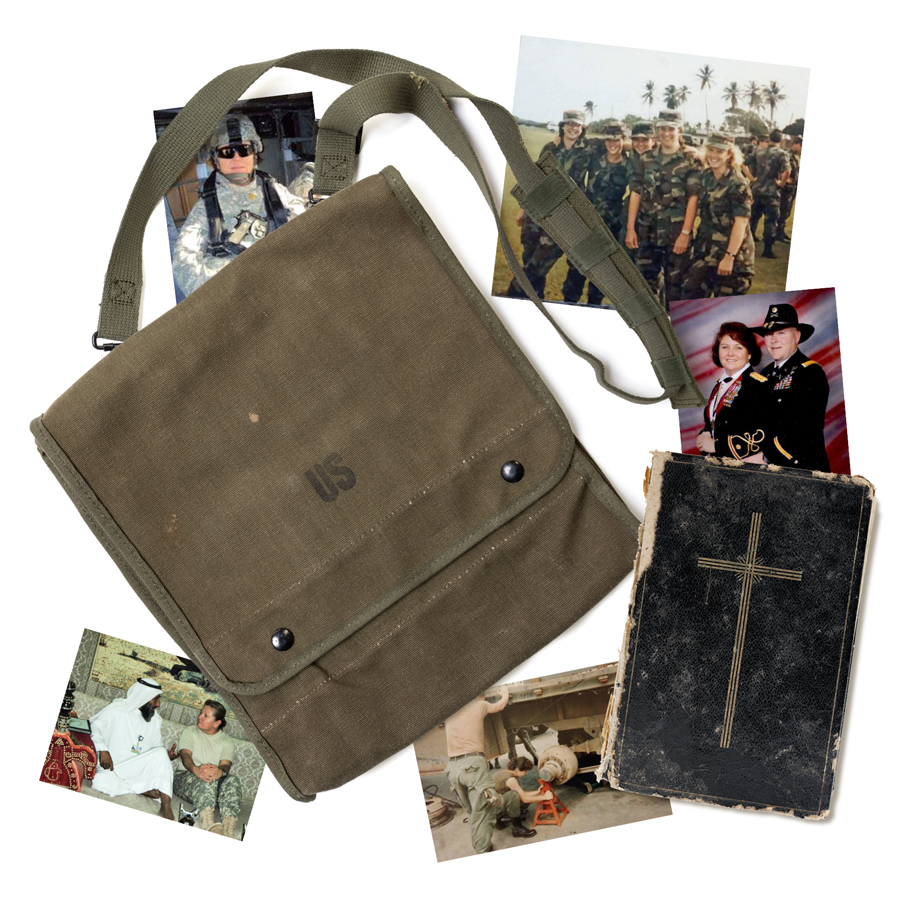 What she thought was an impulsive decision as a teenager turned into a military career of 27 years. Working on large army trucks, Wayman was the only female light and heavy wheel vehicle mechanic. After serving as a drill sergeant for two years, she accepted an ROTC scholarship to the University of Tampa in Florida and received her degree in education with a minor in religion. Initially, Wayman hoped to become an army chaplain, but the army did not have female chaplains at that time. Instead, she deployed several times for humanitarian assistance missions to Haiti and Bosnia where she discovered a deep love for helping people.

While Wayman was passionate about her work, she also experienced significant losses during her time in the military. In 2006, her 20-year-old nephew was killed by a sniper in Iraq. While she was serving in Afghanistan, her convoy hit a landmine and she lost many of her fellow soldiers. Though Wayman herself had been shot at and injured in many ways, she always made it home.

“I struggled a lot with the guilt of why I didn’t die,” she said. “Why my nephew? Why my friends? Why my soldiers?”

In 2007, Wayman married a fellow army soldier named Troy. As they looked toward retirement, the couple purchased a large home in Nolanville, Texas, a home base for Wayman as she sought to become a missionary abroad. All of their plans were coming together, until tragedy struck.

“I found myself alone in this 4,000 square foot home that we had meticulously decorated,” she said. “For months after that, I was in my house. The shades were drawn. I didn’t go out, and I ate whatever was in the house.”

During these months of mourning, Wayman questioned her call and felt reluctant about serving God.

“I knew God had called me, and I was prepared to serve him. But after losing my husband, I did not want to serve him anymore because I did not understand how he could put that calling on my heart and have all this happen,” she said.

After not leaving her house for months, Wayman finally went outside to check the mail. Among all of the letters and magazines that had piled up during those painful months was a flyer from George W. Truett Theological Seminary.

Though Wayman had always known she wanted to go to seminary, it was the last thing on her mind at this time in her life. She recognized the Truett building from her many drives down Interstate-35, but never expected that she would feel called to attend seminary there.

“I dropped everything else as I looked at that little thing, and I said, ‘Really God?’” she recalled.

Wayman filled out an information card, and about a week later, Truett student Matthew Davis called her to provide information about the Seminary. More importantly, he also continued to call to check on her. She did not meet him until Truett’s Preview event in the fall of 2017.

“I gave him a big hug because he did not have to keep calling me to see how I was doing, but he did,” she said.

Wayman decided to enroll at Truett the following spring to pursue a Master of Divinity with a concentration in family ministry. Classes began in January, a difficult time for her as the second week of school would mark the two-year anniversary of Troy’s death. As she nervously sat in class, she was astonished by the very first question her professor, Dr. Andrew Arterbury, asked the room of students, “Is there anything we can pray for you?” Ruby shared her prayer request with the class and was amazed by their response.

“When we prayed, so many of the people in the class came and hugged me. They did not even know me,” Wayman said. “They just hugged me, and I felt like this is where I was supposed to be.”

Wayman’s initial experience with the compassion of Truett professors continued as she discovered faculty’s openness to answering her theological questions, having conversations with her, and continuing to pray for her.

Looking back over her time in seminary so far, she identifies Dr. Roger Olson as a great source of encouragement and recently retired Dr. Lai Ling Ngan as an exemplar of the love of Christ.

“Dr. Ngan was so pastoral in her counseling and like a tiger in class. She did not accept laziness and she pushed us to think, not just regurgitate what we thought passages meant,” Wayman said. “I could feel the deep love she has for Jesus. She renewed my love of the Old Testament, and I was not prepared to love it. I was prepared to fight it.”

Outside of her professors, Wayman also emphasizes the encouragement and support that she has received from her fellow students throughout her journey at Truett.

“My friends here at Truett have taught me to breathe, to laugh, and to enjoy life,” she said. “I love walking through the building seeing groups of students debating a biblical passage, or praying together, or just laughing and being happy.”

With professors cheering her on and supportive fellow students working alongside her, Wayman believes Truett Seminary is a significant stepping stone toward pursuing her call to ministry.

“My goal is to learn about God and his holy Word and how to apply his message to people like me — people who hurt, people who do not know where they fit in, people who need to know they are loved by the King of Kings,” Wayman said. “The aspirations I have now are the same ones I’ve had since I was a six-year-old little girl praying to Jesus. I want to serve my Risen King with everything I have. I want to bring his holy, undying, unending love to people all over the world — one household, one neighborhood, one city at a time.”