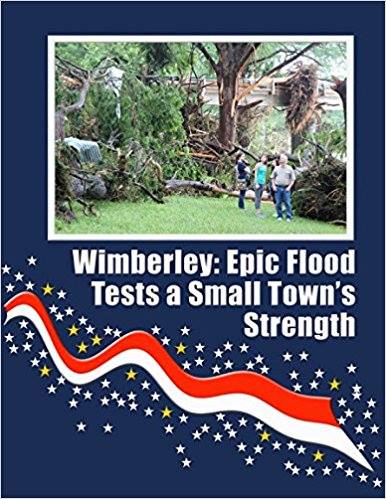 A storm system of unprecedented proportions stalled over counties of the Hill Country north and west of Wimberley, Texas, on the afternoon and evening of May 23, 2015. Within just a few hours that Memorial Day weekend, the system dumped torrential rainfall into the Blanco River that runs through the Wimberley Valley and through San Marcos.

In about a few hours, the Blanco River rose from five feet to 41 feet. At one point, the Blanco was rising at a rate of five feet every fifteen minutes. The estimated flow was 175,000 cubic feet per second, and the river reached a record height of 45 feet by midnight. The amount of flood water would have filled the AT&T Stadium in Dallas. By dawn on May 24, Wimberley had seen eleven lives lost, 350 homes damaged or destroyed, the loss of 15,000 trees, and the arrival of the first volunteer corps that would swell to more than 6,000 before the end of the summer.

In the weeks following the flood, community leaders began talking about ways to chronicle the storm, its devastation, and its effects on those who were in the path of the rising waters and those who were first responders. A team soon coalesced, thanks to the leadership of the Wimberley Village Library. That team included the circulation librarian, a former newspaper editor who had previously published a book about a flood int he Panhandle community of Canyon; the teen librarian, an experienced transcriptionist; a Wimberley psychology professional, experienced in interviewing and assisting those who had been through tragic events; and a former mayor dept at fund-raising an retail sales. Immediately, the team thought to publish a book recording the experiences of those who had been victims of the flood and those who had responded. The team hoped to record stories from the flood, but also to help the community use the book to discuss what happened and to heal. It was also important to have a historical record of what happened and why.

Without the leadership provided by the Wimberley Village Library and district board, this project would not have been undertaken, and the stories of those who were affected would have been lost. The interviewing experience of the circulation librarian and community psychologist was essential to the successful outcome. The stories included reflect the fact that every effort was made to capture the terrible moments of the flood and its aftermath with compassion and with accuracy and with the work's legacy in mind.