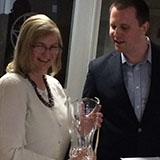 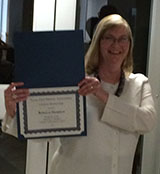 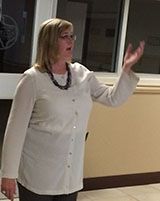 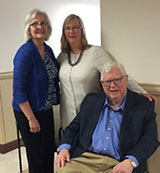 The Texas Oral History Association is pleased to announce Dr. Rebecca Sharpless, professor of history at Texas Christian University, as the tenth recipient of the Thomas L. Charlton Lifetime Achievement Award. Dr. Sharpless receives this honor in recognition of her significant contributions to oral history administration, research, publications, and teaching, plus her effective leadership in professional oral history organizations. This tribute shines the spotlight on just some of her representative accomplishments in those areas.

Dr. Sharpless, affectionately known as Becca, grew up in Waco, Texas, and breezed through college, graduating magna cum laude with a degree in English from Baylor University in December 1978. As an undergraduate student, she was an editorial assistant in Baylor's Program for Oral History, and in May 1979, she joined the staff as coordinator for administrative activities. She entered the Baylor graduate school the next fall and worked full-time in oral history while completing her master's in American studies. She became assistant director for administration in 1982 and associate director in 1986. In 1982, the former oral history program became the Baylor University Institute for Oral History (BUIOH), and in 1985, its primary research staff, including Becca, gained lecturer faculty status in recognition of their increasing professionalism.

In September 1987, Becca took a leave of absence from BUIOH to pursue her doctorate in American studies at Emory University, Atlanta, Georgia. While writing her dissertation, she returned to Waco and taught history part-time at both Temple Junior College and Central Texas College. From 1990 to 1993, she served as interim director of Baylor's interdisciplinary Program for Regional Studies. In 1993, having completed her PhD, she returned to BUIOH as its second director, a position she held till moving to TCU in 2006. During her first months as director, she oversaw the development of a new suite of offices for the Institute on the third floor of Baylor's Carroll Library, overlooking the historic Burleson Quadrangle.

In 1996, a prominent outside consultant evaluated the Institute’s work and determined that it ranked with the three most-respected programs in the United States: Columbia University, the University of California-Berkeley, and UCLA. Under Becca’s leadership, BUIOH stretched outward toward increasing participation in the broad oral history world. The Institute entered several contract agreements for oral history services, including researching, interviewing, processing, and writing historical narratives for local, state, and national organizations. The Institute also brought to campus lecturers whose oral history work had national and international influence, including civil rights leader Julian Bond, British historian Alistair Thomson, Latina historian Vicki Ruiz, and historian Edward Linenthal. Becca initiated a new visiting research grant to bring scholars to campus to investigate diverse topics in Baylor’s oral history collection, greatly increasing the visibility of the collection through citations in dissertations and publications.

Becca led BUIOH in its race to keep pace with rapidly changing oral history technology. In the 1990s, the Institute developed its first website, which included the Workshop on the Web and a searchable database of abstracts of its oral history collection. Accessibility grew in importance with the development of online library catalogs, and Becca assisted Baylor Libraries with the process of adding the oral history collection to the BearCat online catalog. The gradual transition from analog to digital recording and transcribing began in 2005 under Becca’s direction.

Becca’s research has contributed recordings from 470 separate interviews to the Baylor oral history collection. In addition, she has transcribed, edited, or indexed hundreds of transcripts for deposit in the collection. Her investigations carried her into most of BUIOH’s major project categories, including Baylor University, Texas Baptists, Waco-McLennan County, Family Life and Community History, Religion and Culture, Texas Economic History, and Texas Judicial History. In addition to published articles, scholarly papers, and speeches too numerous to include here, outcomes of Becca’s interview series appeared in her thesis and dissertation, books and book chapters, and a radio program.

Becca’s first interview series, initiated in June 1981, provided personal testimony to support her thesis, "A Comparative Analysis of Oral History and Q Methodology as Subjective Research Approaches: An Urban Renewal Case Study" (Baylor University, 1983). Interviews with Texas Blackland farm women proved useful for her dissertation, "Fertile Ground, Narrow Choices: Women on Cotton Farms of the Texas Blackland Prairie, 1900-1940" (Emory University, 1993). Later, she expanded her oral history research on that topic with additional interviews, including many among Tejanas in Central Texas. The resulting book, Fertile Ground, Narrow Choices: Women on Texas Cotton Farms, 1900-1940 (University of North Carolina Press, 1999), won three prestigious awards in 2000--the Coral Horton Tullis Memorial Prize for best book on Texas History, the Liz Carpenter Award for Research in the History of Women and Texas, and the T. R. Fehrenbach Book Award. Her interviews with farm women also informed the chapter, "'Pretty Near Every Woman Done a Man’s Work': Women and Field Work in the Rural South," coauthored with Melissa Walker and appearing in Work, Family, and Faith: Rural Southern Women in the Twentieth Century, coedited by Walker and Sharpless (University of Missouri Press, 2006).

During the 1980s, Becca ventured into radio to bring her narrators’ voices to a wide audience. Her interviews with the descendants of the founding families of Lincolnville, a freedman’s settlement in Coryell County, Texas, provided story content for Lincolnville at Moccasin Bend: Black Families on the Texas Frontier (Baylor University, 1987), a twenty-eight-minute documentary aired on PBS radio stations across the state. Becca served as the executive producer of the program, which was funded by the Texas Committee for the Humanities, a state program of the National Endowment for the Humanities.

While serving as director, Becca encouraged BUIOH faculty to collaborate on a joint research project with the purpose of publishing the findings. Her studies of Texas rural life had revealed the significance of the country church in the lives of farm families, and her research journeys across local prairies inspired the guiding question for the project: Why did some rural churches survive despite the depopulation of the countryside in the late twentieth century? Photo documentation of persistent open-country churches by Clark G. Baker and interviews by Becca and others provided answers to the question, published in Rock Beneath the Sand: Country Churches in Texas (Texas A&M University Press, 2003).

In addition to scholarly outcomes based on research interviews, Becca produced publications directed toward oral history methodology and theory. Early on in her career, she assisted with two editions of Thomas L. Charlton’s Oral History for Texans (Texas Historical Commission, 1981, 1985). Also, she was editor of two editions of the Institute’s finding aid, A Guide to the Collection (1985, 1996). In 1985, in celebration of its fifteenth anniversary, BUIOH inaugurated a series of interdisciplinary symposia with a two-day conference bringing to Baylor a host of nationally known oral history practitioners. Becca co-edited the published symposium proceedings, The Past Meets the Present (University Press of America, 1988). Later, she co-edited the Handbook of Oral History (AltaMira Press, 2006), a 625-page volume of essays by leading theorists and practitioners of the oral history craft, including Becca’s opening essay, "The History of Oral History." In 2007, two textbooks, with selected articles from the Handbook, appeared--History of Oral History: Foundations and Methods and Thinking about Oral History: Theories and Applications.

Becca's teaching contributions to the field of oral history range from one-on-one mentoring to the university classroom to a variety of workshops, both small and large. In 1999, to increase her knowledge and skills for teaching, she completed the renown Summer Institute in Oral History at Columbia University.

Mentoring university students in applying oral history methodology to their research is a special enjoyment for Becca. She has directed honors theses, master’s theses, and dissertations, including many based on oral history research, in the fields of history, American studies, English, museum studies, church-state studies, and education. BUIOH directors have taught Baylor’s graduate seminar in oral history since 1971. Becca taught the course during her tenure as director, inspiring dozens of students to become strong oral historians. She also guest-lectured on oral history methodology for academic units across the Baylor campus, including history, religion, education, and gerontology.

All across Texas, people recall that their first introduction to oral history was a workshop taught by BUIOH faculty and staff. Becca excelled as a workshop leader, welcoming every opportunity to help others get started in oral history. From 1983-1985, she was part of a team who organized and led seventeen workshops across Texas, collaborating under a grant from the Texas Committee for the Humanities with the recently organized Texas Oral History Association, the Texas 1986 Sesquicentennial Commission, the Texas Historical Commission, and the Texas State Library. Through the workshops, Becca helped the Institute gain lasting alliances with oral historians in all parts of Texas. In subsequent years, she taught four or five oral history workshops per year. Some of the groups benefiting from her oral history knowledge were the Oral History Association, Organization of American Historians, National Park Service, Texas Department of Parks and Wildlife, Texas Library Association, Texas Association of Museums, and Society of Southwest Archivists; in addition to a host of local and regional history centers, museums, historic preservation societies, and K-12 educational groups.

Becca became an active participant in the national Oral History Association (OHA) early on, as all students and staff helped produce OHA’s quarterly newsletter while BUIOH served as newsletter headquarters from 1974 through 1992. She attended her first OHA annual meeting in October 1979 and thereafter participated in various OHA committees and initiatives and presented papers at annual meetings. She won election in 1986 to the OHA executive council for a three-year term. From January 1995 through May 1999, Becca served as OHA executive director while BUIOH hosted the association headquarters. In 2003, she began a three-year commitment as OHA officer, culminating in service as the president in 2005-2006. Her professional participation became increasingly global, with her participation in meetings of the International Oral History Association in New York (1994), Sweden (1996), Turkey (2000), and South Africa (2002).

Texas Oral History Association (TOHA) is proud to honor one of its founders and charter members for her substantial contributions to the field of oral history. In 1982, Rebecca worked closely with BUIOH director Tom Charlton to write the TOHA articles of incorporation and bylaws. She served as TOHA’s first secretary-treasurer (1982-1987) and has remained a faithful sponsoring member. As the youngest recipient of the TOHA lifetime achievement award to date, Dr. Sharpless will certainly continue to heap up accolades for her research, writing, and teaching far into the future.