The African American Library at the Gregory School

Award Presentation
The African American Library at the Gregory School received the TOHA Community Award on Saturday, October 18, 2014. To commemorate the event, the library hosted a presentation by Dr. Michael Botson, who discussed the role of oral history in his book, Labor, Civil Rights, and the Hughes Tool Company. 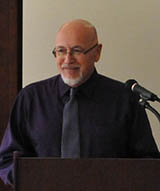 After his talk, Dr. Botson, a TOHA board member and history professor at Houston Community College, presented the TOHA award certificate to the Library.

Post the Emancipation Proclamation, many freed slaves settled in the swampy area of Houston known as “Freedmen’s Town” in Houston’s Fourth Ward. In 1870, The Gregory Institute was formed in Freedman’s Town as the first school for African Americans in the city and later became the Edgar M. Gregory Elementary School when it was inducted into the Houston ISD in 1876. The freed slaves in this community built their own homes, churches, and started their own business. It is reported that in the year 1915, there were of 400 businesses in the area. The area thrived for decades until the incorporation of major highways that dissected it from the up and coming downtown area. Many businesses relocated and many people moved from the area due to rising costs and the increase of opportunity in other areas of the city. The school remained open until the mid-eighties.

The oral histories are viewed and used by students (K-12 and college students), local and statewide historians, and people who are just interested in learning more about Houston’s African American History. The library also works closely with local universities and community colleges for to be a resource for students doing research on Houston’s history. The oral histories provide a perspective of history that cannot be found in a textbook and is a primary, unfiltered resource for researchers.

The African American Library at the Gregory School not only houses oral histories, it also houses an archive that contains photographs, manuscripts, and other items that represent different facets of Houston’s African American history. The items housed in our collection are donated from members of the community who we have formed relationships with in an effort to preserve and promote this history. The library also hosts monthly programs that explore history, inform patrons on how to preserve history (including oral history methodologies for home use), and even recently we hosted Dr. Michael Frisch, well-known oral historian from New York. The library also has galleries that depict the history of Freedman’s Town, African American life in Fourth Ward and a gallery that changes on a quarterly basis and features art and memorabilia of African Americans in Houston. With all this said, The African American Library at the Gregory School is much more than a library; all of these components come together to create a cultural learning experience for patrons.