Click below to view the award presentation and Lois's remarks on how oral history can keep you young and make you rich and famous!

This year marks Lois E. Myers's twenty-eighth year of employment at the Baylor University Institute for Oral History (BUIOH) in Waco, Texas. She has held the title of Associate Director since 1989 and served as interim director from 2006-2007. Concurrently, Lois has served as Secretary-Treasurer of TOHA since 1987 and managing editor of the Sound Historian, TOHA's annual scholarly journal, since 1993.

Lois's contributions to the field of oral history through her work at BUIOH are considerable. As of this date Lois has personally conducted 350 interviews and edited over 150 others. She is a meticulous scribe, always providing word lists for her recordings and many times creating detailed indexes for her longer series. A good amount of her work is now available on the BUIOH online database for researchers to access all across the world.

Lois is also an accomplished author. In 1991, Baylor University Press published her first tome, Letters by Lamplight: A Woman's View of Everyday Life in South Texas, 1873-1883. Since then Lois has contributed chapters or co-edited seven other works. Among these are Rock Beneath the Sand: Country Churches in Texas in 2003 with Rebecca Sharpless and a trio of seminal works on oral history itself: Handbook of Oral History (2006), History of Oral History: Foundations and Methods (2007), and Thinking about Oral History: Theories and Applications (2008) with Thomas Charlton and Rebecca Sharpless.

Lois has also been active in the profession, writing articles and reviewing books. She has six articles to her name, published from 1988 to 2012. The publications and organizations she has served as book reviewer for include: Agricultural History; Arkansas Review; East Texas Historical Journal; Family Ministry: Empowering through Faith; H-Texas; Oral History Review; Sound Historian; Southwestern Historical Quarterly; West Texas Historical Association Yearbook.

One of Lois's more impressive skills is that of public speaking/presenting. Lois has presented nineteen papers or lectures at various state and national conferences, from the Baylor University campus to locations as far afield as Alaska. She is also tireless when it comes to sharing her experience in oral history to the uninitiated through professional workshops. From the local community gathering to a national audience, Lois has presented in over seventy workshops since 1988. She now reaches international participants through BUIOH's twice-yearly "Getting Started with Oral History" online workshop, and since 1996 has provided anyone with an Internet connection valuable insight via the "Workshop on the Web" she created and edited.

Lois's leadership and recognition of service extends far beyond Waco. She has been a member of the Oral History Association's (OHA) State & Regional Forum since 1988, and served on the Nominating Committee from 1995-1997 and again from 2011-2013, as well as the Projects Award Committee in 2000 and 2004. In 2011, along with fellow BUIOH faculty members Stephen Sloan and Elinor Maze, she was awarded both the Texas Historical Commission Award of Excellence in Preserving History and the American Association for State and Local History Award of Merit.

Lois attends First Baptist Church in Woodway, where she has served with her husband, Dennis, as co-director of the Adult II Bible Study since 1985. She also volunteers for the preschool division, is a member of the Senior Adult Committee and served on the church's sixtieth anniversary committee.

Due to her outstanding record of professional achievement and community involvement and her long and dedicated service to TOHA, the Board of Directors is pleased to name Lois E. Myers as the ninth recipient of the Thomas L. Charlton Lifetime Achievement Award. 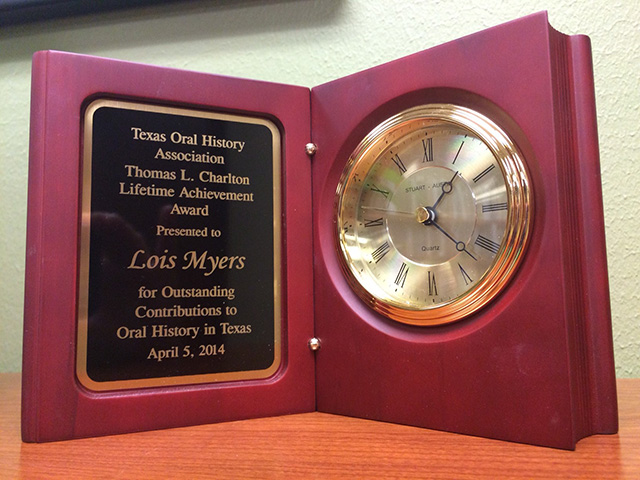 Ceremonial plaque/clock presented to Lois by the Board of Directors 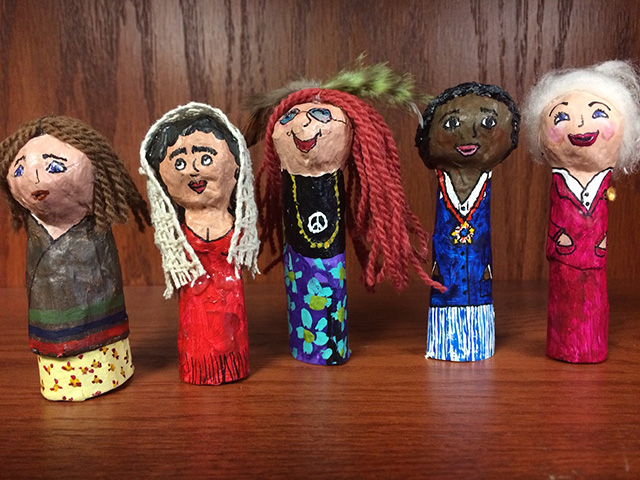