Added security for students, improved response in a medical emergency and a direct line in a crisis situation – all are built in features of Baylor Department of Public Safety's BU Campus Guardian App. 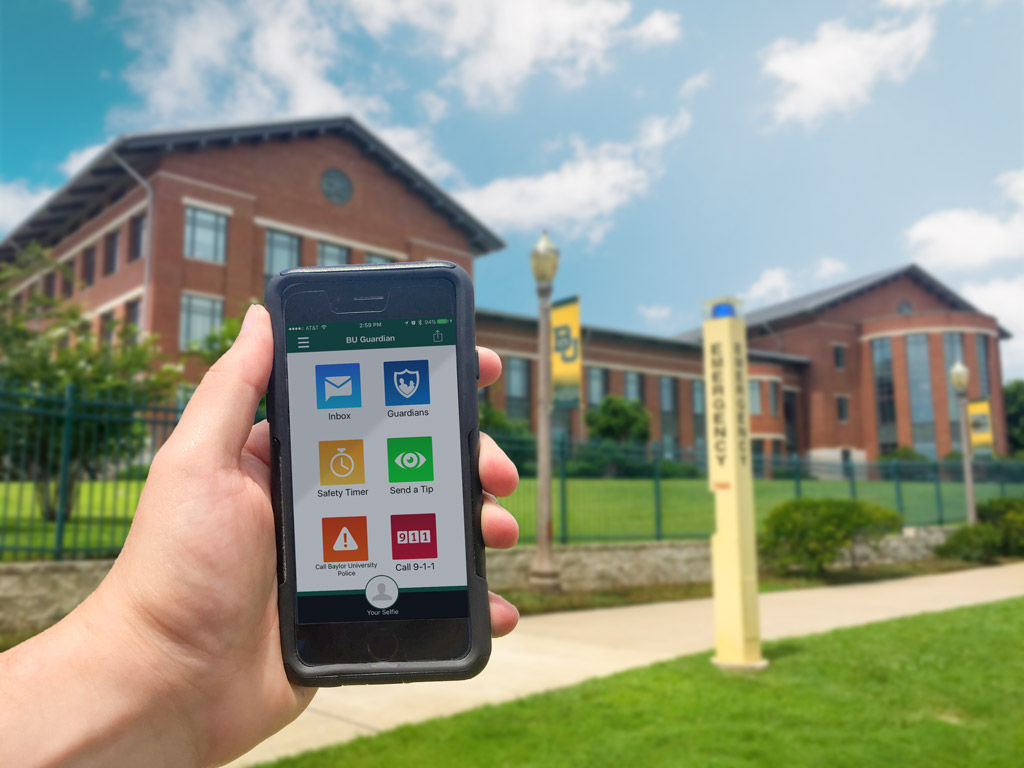 Initially Baylor's Police Department and Emergency Management team focused on sharing the app's benefits with students, but with more time and knowledge of the app's power, they're focused on making sure the entire campus is informed of its capabilities.

When the app was launched, Baylor was searching for a way to help students feel safer walking across campus in the early morning hours if they had been late night studying or if they were in a situation that made them feel uncomfortable. "Particularly for freshmen, if parents wanted to know they got to their destination OK but didn't necessarily say, 'I need you to call me,' this is a really great option," said Leigh Ann Moffett, Director of Baylor's Emergency Management.

Once someone downloads the app, which is found in the app store as Rave Guardian, they set up their user profile and assign guardians within their account. A guardian is someone they want notified in the event of potential trouble. Users set a timer for how long it should take to reach their destination. If they don't arrive on time and turn off the timer, guardians are then notified.

The app also allows someone in need of immediate help to reach out to Baylor police through text message or a phone call. Because users set up a profile, if dispatch is contacted, pertinent information about that person can be associated with the account, including any medical concerns.

"We saw this as a portable emergency call box or a portable blue light, so to speak, that each student could have in their pocket at any point in time," said Moffett. Because true north and Baylor north are different, if students or staff have the geolocation featured turned on within the app, responders can more easily pinpoint their location than they could with a 911 call.

"They're going to immediately have more information to assist with a more efficient response," said Moffett.

In a scenario where a building is being evacuated, someone who is wheelchair bound or an employee recovering from a recent surgery is able to notify responders of their presence. If they've included medical details within their profile, responders will be able to more quickly assess the emergency situation.

"If we were to ever find ourselves in a hostile situation such as an active shooter situation, and you needed to immediately notify emergency responders of the situation but you could not have an audible conversation, you would utilize send a tip within the app to text them information about what is going on," said Moffett. Additionally users can take a photo and attach it so that dispatchers could immediately start responding without needing to talk to them.

Moffett said it's important for users to remember to keep the app open if they do send a tip. "People have a habit of closing the app out and then not going back and checking it. If you're going to reach out to police, be on standby because they're going to respond to you, and they may ask for additional information," she said. If police don't get a response, they end up calling the user back. The assumption is that someone who initiates a conversation through the app doesn't want to have an audible conversation.

Outside of a crisis situation, users may also submit tips of any nature including those related to situations ranging from suspicious activity to bullying. All tips are kept confidential.

The idea for the app was developed out of the 2014 Baylor-commissioned external review of its Police Department by Margolis Healy & Associates, a leading education safety and security consulting firm. Today, more than two years after the app's launch, just over 2,500 users have installed it on their phones. Over the last three months, 42 users logged timed sessions, 23 tips were submitted, and police received 14 emergency calls ranging from suspicious activities to accidents to mental health concerns.

When someone sends a tip or uses the app to notify police of a medical emergency, Baylor dispatchers are notified immediately. At the beginning of their shift, dispatchers log into BU Campus Guardian and keep it open, with someone monitoring it around the clock.

Other Texas schools including UT Tyler, UT Arlington, Texas Tech and South Texas College are also harnessing the power of the app.

"The safety of our students, faculty, staff and entire campus is on our minds each and every day. We are continually searching for helpful tools and implementing improvements that enhance the wellbeing of our campus community," Moffett adds.

For more information on Campus Guardian, including an FAQ, visit baylor.edu/dps/guardian.