Beginning Summer 2017, Baylor University’s Title IX Office will launch an innovative and growing prevention initiative called, the Green Dot, etc. program. Commonly referred to as Green Dot, the program views every person within a population or community as a potential bystander of interpersonal violence. It is one of only four assault prevention programs recognized by the Centers for Disease Control (CDC) as “promising, based on their comprehensive program models and documented evidence of impact on sexual violence,” according to the CDC website. 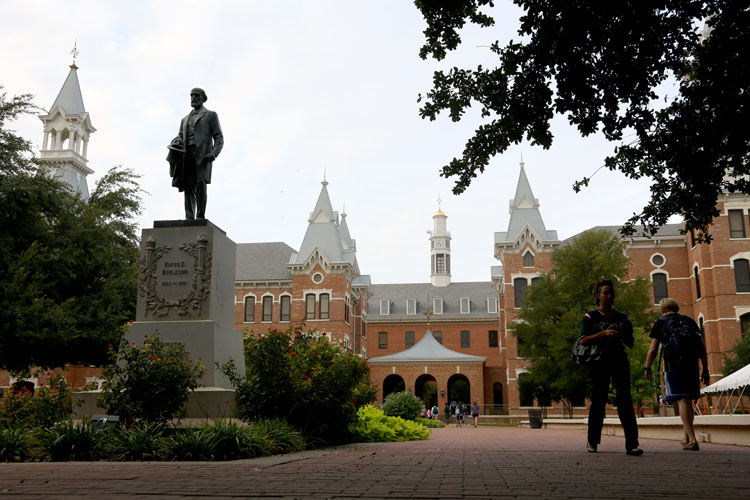 “It is very well thought-through and researched in a way I haven’t seen in some other similar programs,” said Kristan Tucker, Title IX coordinator at Baylor University. “That’s not to say other prevention programs aren’t good; it’s just that Green Dot has been around for a long time and is proven to be effective.”

In 2014, the Center for Research on Violence Against Women at the University of Kentucky published the results of a five-year study evaluating the efficacy of the Green Dot program in Kentucky high schools. Their findings indicated a 50 percent reduction in self-reported sexual violence perpetrated by students at Green Dot-trained high schools, compared to a marginal increase at schools that did not receive training. Researchers also found a 40 percent drop in self-reported violence of any kind (including sexual violence, sexual harassment, stalking and dating violence) at Green Dot-trained schools, compared to only a small reduction at the non-Green Dot schools.

What’s with the Green Dot?

When a contagion of uncommon virulence begins to spread somewhere in the world, it is called an outbreak and the story is picked up by major news networks. On an enlarged map of the affected region, each reported case is represented by a red dot. As a television news anchor reads the prompts, viewers watch the red dots multiply, eventually overlapping one another and covering the map.

“Green Dot is asking you to imagine that the map is your town or your campus, and the red dots represent acts of power-based violence,” said Sarah McPherson, training and prevention specialist in Baylor’s Title IX Office. “That red dot also represents a moment of inaction by a bystander. They made a choice to do nothing.”

Conversely, a green dot placed in the middle of all of the red dots represents a proactive step or choice to intervene, an instance wherein violence is prevented. One green dot begets another and another.

“A green dot is any behavior, choice, word or attitude that promotes safety for all our citizens and communicates utter intolerance for violence,” according to livethegreendot.com.

The program’s stated goal is to mobilize a force of engaged and proactive bystanders. To that end, approximately 35 Baylor faculty and staff members from a variety of departments and divisions have volunteered to attend a four-day Green Dot instructor training session in May. Hosted by the Title IX Office, completion of the 32-hour training will equip participants to play an integral role in implementing Green Dot across campus – a rollout unlike any Baylor has ever seen.

“Part of the Green Dot way is that in order for it to spread, it has to be organic and grassroots,” McPherson said. “There can’t be mandatory trainings, according to the research. The success of the program depends on that grassroots approach. Having a wide variety of faculty and staff trained means they’ll have that buy-in with their students and their peers and their colleagues, and they can say, ‘Hey, here’s this great thing I spent four days learning and I’m really excited about it. Do you want to hear more?’ It will be really amazing for our campus.”

What McPherson is referring to – the model of social change on which Green Dot was built – is called sociological diffusion of innovation, a theory posited by American communication theorist and sociologist Everett Rogers in the early 1960s. A few individuals become aware of a new idea or behavior, their interest is piqued as they learn more. They adopt the new idea or behavior and influence others to learn more and adopt, too, until a critical mass of people willing to engage in the new behavior is achieved. This process of social change is recognizable everywhere on national and regional scales, and within tight-knit communities; but it takes time and patience, and its success requires strategy.

Tucker, who has experience with other violence prevention programs, explained that a more “top-down” implementation of prevention programs on campuses is common. Green Dot is focused on effecting social change through relationships, connections, knowledge and social marketing, regardless of rank, title or position.

“I’ve utilized other programs in previous positions, and I’ve been trained in those programs,” Tucker said. “Green Dot is not focused solely on the president or highest-ranking officer in an organization as a means of changing a place. It’s not about “I’m in charge and I say do this.” [Green Dot] relies on the people who are influencers in the population because they have that personality, that charisma, that caring spirit that draws people together and makes them want to do similar things.”

Following this month’s ‘Train the Instructor’ phase, these 35 men and women will be prepared to facilitate bystander intervention training on campus. They will actively engage colleagues, friends and students on campus to equip more potential bystanders with the tools they need to understand the barriers to taking action and to intervene if they find themselves in a bystander situation. The result is a growing number of people within our community prepared with real-life methods to intervene in the event they encounter a violent, or potentially violent, situation.

“As part of the program’s design, we can’t force or mandate anyone to attend training, and we won’t even progress to speaking about or doing Green Dot trainings with incoming freshman classes until the second year of its implementation,” McPherson explained. “The program focuses on getting that buy-in from the influential folks on campus; and if you think about it, that’s not going to include new freshman coming to campus for the first time. The influencers are trained first and then they ‘live the Green Dot,’ they live out bystander intervention, promote that through their actions and conversations, getting their peers to ask, ‘What is Green Dot? What is this all about?’ Then, those people can be training in the Green Dot model.”

With a goal of impacting prevention on every front, Baylor’s Title IX team also is adding a second full-time training and prevention specialist to reach out to student organizations, campus leaders, and the broader campus community to engage them in conversations and educational opportunities to help them understand the impact of sexual violence and provide tips for prevention and information about reporting options and resources available to all students, faculty and staff.