Forefront of their Field 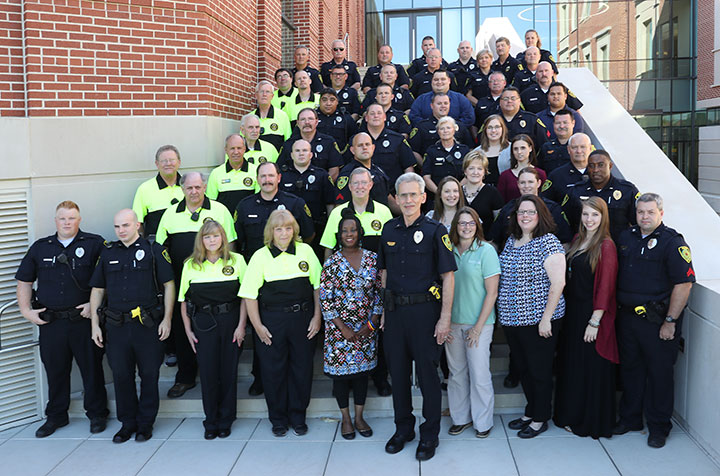 A common misconception exists that campus police simply serve a security function. However, the Baylor University Police Department (BUPD) is fully recognized by the State of Texas as a certified police department whose officers have the full powers, privileges and immunities of any other police officer in the state. Because of the responsibility granted by this authority, the Department is dedicated to a proactive approach to training. While the Texas Commission on Law Enforcement mandates police departments complete 40 hours of training per two-year training cycle, BUPD officers averaged over 100 hours for this past two-year cycle.

"Training is critical for any profession to get people ready to handle the issues they will face in their jobs," said Brad Wigtil, chief of the Baylor University Police Department. "I'm a firm believer that if our officers, dispatchers and security officers are going to serve this community really well then we need to give them the tools to do that—not just equipment but training."

Each May, following commencement, when campus life slows down, Chief Wigtil and Patrol Captain Danny Knight have instituted a 40-hour block of training conducted over a two-week rotation covering a diverse set of subjects, such as Taser certification, distracted driving, alcohol and drug prevention for college campuses, crime prevention, medical skills and more.

"We try to provide BUPD with a variety of training, some of it new exposures and some of it repetitive," said Captain Knight. "We've seen this training pay off—like AED [automated external defibrillator] and CPR training. The standard is every two years, but we do it on an annual basis because we  feel that it's so important to keep that  up to date."

This past January during a weekend event, a faculty member at the Baylor Law School suffered a heart attack. Because of proximity and availability, BUPD was the first emergency responder to arrive. The officers who responded were able to use AED equipment to revive the faculty member and then to transfer her care to emergency medical services (EMS) when they arrived.

The training coordinated each May by Chief Wigtil and Captain Knight also includes Title IX and Clery Act education. BUPD is committed to devoting all resources necessary to these subjects to stay proficient and up-to-date. When Baylor updated its Title IX policy this spring, Baylor's Title IX Coordinator Kristan Tucker led a two-hour training to instruct BUPD in the new policy.

In addition, the BUPD has brought in Tom Tremblay, a national leader in the development and delivery of trauma-informed, victim-centered sexual assault investigations, to lead training sessions for the entire department.

"It's critical that our dispatchers who take that initial call, our officers who respond and our investigators who investigate the case understand the neurobiology of the brain and what trauma does to a victim," Chief Wigtil said. "Understanding that helps us work with the assaulted student and work through the process, empowering them, if they choose, to go forward with a criminal case."

Chief Wigtil and several other BUPD officers also attended the National Center for Campus Public Safety Trauma-Informed Sexual Assault Investigation and Adjudication Annual Conference in Washington, DC. All BUPD investigators are certified through the Sexual Assault Family Violence Investigator Course, and the Department has committed to having officers recertified every two years to ensure they are up-to-date on changes to laws and regulations.

Looking to the future, BUPD retains a strong dedication to ensuring that its team is fully equipped to handle sexual assault related cases. In addition to providing training, Tom Tremblay will be lending his expertise to a yearly BUPD training needs assessment, evaluating areas of proficiency and areas of need.

"We will continue to evaluate what we need to do. I want us to serve our community really, really well in all areas, including this area of sexual violence," Chief Wigtil said.

Another area of law enforcement in which BUPD is dedicated to staying in the forefront of their field is active shooter training. All BUPD officers are taught from the Advanced Law Enforcement Rapid Response Training (ALERRT). Active shooter drills are conducted in a private location—to avoid giving away tactical strategies—using Simunition, soap-tipped nine-millimeter bullets that allow the force-on-force training to be as realistic as possible. BUPD also sends officers to the annual ALERRT Conference in San Marcos, Texas.

"At the conference, they bring in all of the players who were involved in any type of active shooter situation from the last conference," said Captain Knight. "There's a lot of information garnered from those individuals—from the victims and from the officers involved—that can help everyone's overall survivability in these types of situations."

BUPD has taken its firearms qualification a step above what is required by the state, which is to qualify annually with rifles, shotguns and pistols. Because this type of drilling—shooting a target on the range—does not transfer to the real-life situations faced by officers, BUPD travels to Tiger Valley, a firearms and tactical training facility specializing in military and law enforcement exercises, to conduct tactical shooting training.

"Some of our officers will shoot more ammo there in one day then they've shot in their entire career at a regular range," Captain Knight said. "SWAT would be the most comparable as far as level of training."

As BUPD continues to assess future training needs, two areas that have taken precedence are mental health and cultural awareness. BUPD currently has five officers certified as Mental Health Peace Officers through Crisis Intervention Training (CIT), and they are currently dispersed among the Department's three shifts.

"We deal with many students who are in crises," Chief Wigtil said. "So I made the decision that I want to certify everyone, hopefully, this summer."

BUPD also plans to conduct cultural competency training this spring. Though the Department has very rarely received complaints about officer treatment, Chief Wigtil still believes it is important to broach the subject of cultural diversity on a fairly regular basis.

"What I want my officers to understand is that I don't care what a person's social class or race or background is—God values that individual. What I want my officers to do is value them," he said. "If we arrest someone, regardless of what law they violated, they still deserve dignity and respect based on the fact that God values that individual. This is a noble profession. Let's serve people well."