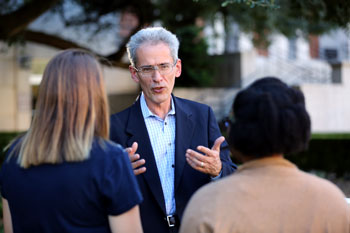 The partnership between the Baylor University Police Department (BUPD) and the Waco Advocacy Center is a steadfast alliance that has sought to bring about change in response to sexual assaults. Collaboration between the University and the Center has existed for many years and continues to grow in effectiveness as both parties seek to continually improve their response to sexual assault.

The Advocacy Center for Crime Victims and Children (Waco Advocacy Center) began in Waco more than 40 years ago. The Center serves six counties through their mission to promote healing of children and crime victims through advocacy, collaboration, prevention and treatment. They provide a crisis hotline, forensic examinations, counseling and prevention programs and other services to the community.

"We like to think that they walk in as victims, but go out as survivors," Wright said.

Currently, the Waco Advocacy Center is preparing to finalize a "Memorandum of Understanding" (MOU) with Baylor to "formalize the great relationship we've had over the years," according to Brad Wigtil, Chief of the Baylor University Police Department. The partnership between the Advocacy Center and BUPD helps victims of sexual assault to more conveniently and effectively access the resources available to them. For example, if a victim first meets with a representative from the Waco Advocacy Center, that representative can encourage him or her to also meet with the BUPD, and vice versa. 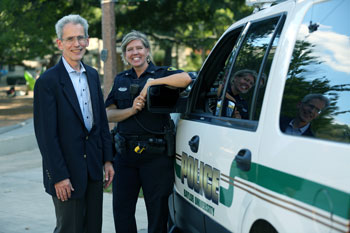 A few examples of the partnership between Baylor and the Waco Advocacy Center include:

The BUPD is a participant of the Waco-Area Sexual Assault Response Team (SART), which is coordinated through the Waco Advocacy Center.

"The heart and soul of the Children's Advocacy Center [another service of the Center] is their multi-disciplinary team. That's what SART is for the Victim's Center – medical advisors, nurses, law enforcement agencies, etc. that come into the initial meeting to work together," Wright said.

"Entities come into the hub and are able to connect to get the best outcome for the survivor," she said. "It's a voice for each group's representative to discuss what is working and how we can make improvements. And representatives have learned that they have additional resources through their SART partners."

2. BUPD Member on the Waco Advocacy Center Board of Directors

BUPD Assistant Chief John Kolinek, who serves on the Waco Advocacy Center Board of Directors, believes, "It's paramount that we have a relationship with the Advocacy Center."

Wright is quick to praise Assistant Chief Kolinek and his service on the Board of Directors as his presence is beneficial for both parties. Kolinek believes his participation on the Board of Directors has allowed a constant line of communication for the partnership between the Waco Advocacy Center and the BUPD. He also sits on the Financial Committee, which lends another positive perspective on dealing with financial planning, fundraising and donations for the Advocacy Center to support the services they provide.

The Waco Advocacy Center participates in BUPD officer training to ensure the highest integrity in working with victims, treating victims with respect, and connecting them to proper medical care. "Victim Centered Trauma Informed Training" has been implemented to help officers understand the neurological impact of assault on victims and to inform and guide interviewing techniques.

The BUPD has also made it mandatory for the officers and dispatchers in its Field Training Program to visit the Waco Advocacy Center. This on-site training gives officers the opportunity to learn where the Advocacy Center is located, more thoroughly understand the services they provide and begin to build relationships with staff and volunteers. This last aspect of the on-site visits is particularly crucial. Building relationships builds trust, and building trust builds success for the survivor.

"It's critical for Baylor University to provide professional services to our community. It's a team effort to handle a sexual assault crime," said Chief Wigtil. "For example, Officer Knowles has developed relationships with the Advocacy Center that successfully help us administer an investigation. The survivor senses and begins to trust that relationship and feels that Officer Knowles is going to help. That kind of confidence is a big thing – whether it's through the initial response or the ongoing investigation."